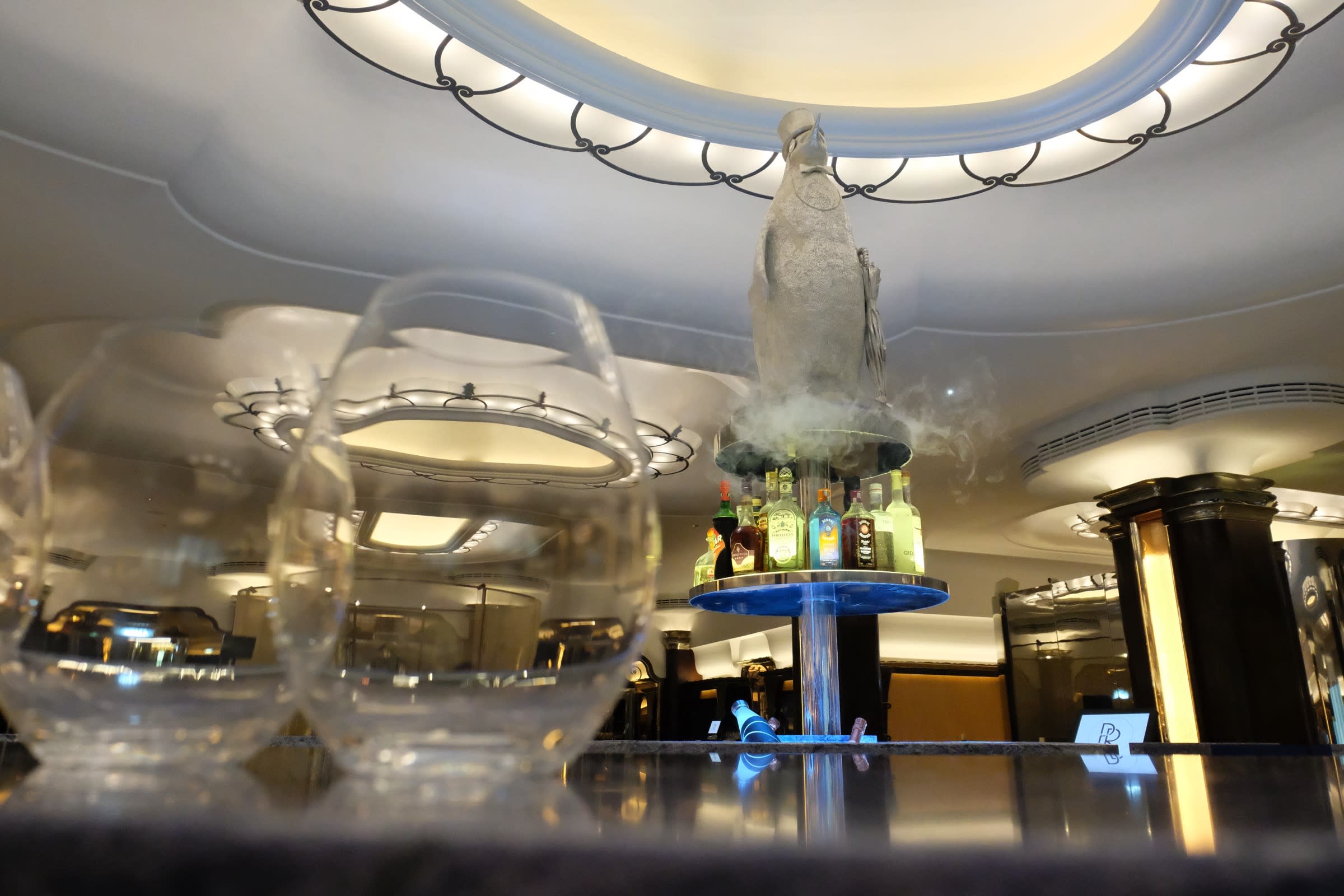 There’s no Bat-signal roaming the ceiling of the cavernous Park Row, no golden lasso or tiara under a glass case, no Green Lantern cocktail heavy on the creme de menthe. For a DC Comics-endorsed restaurant, it’s light on the cringe theme-restaurant tropes.

But there’s some spectacle — and a lot of love for DC — hidden beneath all the fine trappings.

Opening earlier this month in the center of London, Park Row is pitched as a dining experience that takes you to Gotham without the need to wear a costume. In fact, the restaurant’s FAQ notes “Dress more Bruce than Batman,” and there’s actually a ban on people cosplaying inside the venue.

I’ve visited both tech-laced and themed restaurants for work and pleasure, and Park Row feels a little different, in that it seems entirely made for grown-ups. The idea is simple enough: DC universe meets fine dining, with an immersive high-tech experience inside the Monarch Theater (named after where Batman’s parents were shot) as the showstopper event. Bookable in advance, its £200 ($275) tasting menu is a barrage of 11 themed courses that guide patrons through the heroes and villains of DC.

Adding some high-tech bells and whistles to restaurants isn’t anything new. There are several restaurants and pop-ups that have played with projection mapping meant to showcase and amplify the food on the plates, dining rooms with carefully set-dressed courses and lurid surroundings.

The Monarch Theater is all of it put together in a single room. When it’s not showtime, it looks like, well, a conference room. A long, white room with a long, white table in the middle. Aside from the projectors, dotted around the ceiling, it doesn’t look like a room built for immersive superhero dining.

I can’t tell you every beat of the multi-course experience because I didn’t actually get to test it when I visited. Seating 20 customers, there are two services each day. Post-launch, the team has since expanded the Monarch Theater part for four sittings per day.

The team wants to keep some of the courses’ mystique, but I can touch on some of the showpiece parts. The glossy, plain table betrays what’s been packed inside. Park Row doesn’t use projectors for embellishing the dishes or the food. I’m told by a spokesperson that this would distract from the food itself. Instead, the projectors send diners barreling into insane asylum padded cells that vertiginously rotate, making light fittings all pile together in a corner. I’m quickly shown the same room coated in neon graffiti; then wrapped in ivy vines and a final vista high in the clouds.

Any DC Comics dilettante can assume which characters these projections point to. But it goes on from there. The unassuming conference table (ironically, Cisco was apparently involved with connecting everything together) hides more secrets. Two rails run across the center of the table, making it easier to transform the table when it comes to the Poison Ivy course, which centers around a platter of plants, which seem to be a mix of living and artificial. Within this, serving staff dress the logs and plants with drinks, mysterious edibles and things that I’d call nibbles, but I probably shouldn’t. Some of them are borderline hidden, which seems to be by design.

Below these rails, a heating element runs the length of the table. Customers are given a playing card during an earlier course, and are told to lay this on the table. As the experience progresses, the card reacts to the heat of the table, revealing a secret message to each diner.

There are other tricks that aren’t entirely revealed to me, including a floating plate trick that I’ll have to book my own reservation to see.

Outside of the Monarch Theater, Park Row is split up into several different zones, all serving the same food menu — modern European — in a different facet of a fictional Gotham dining scene. From the entrance, modeled after Wayne Manor, you descend a glowing staircase inspired by a Batcave, through a vapor-emitting door frame into Pennyfeathers, a whiskey bar named after Alfred, Bruce Wayne’s long-serving butler. Beyond that, the Iceberg Lounge has a frozen penguin statue towering the bar, while to the left, the Rogue’s Gallery is curated by Catwoman, decorated with reproductions of some of the world’s most famous stolen art pieces, each one marked by a rogue from DC’s back catalog of villains.

One of these artworks, bizarrely, doubles as a drinks decanter. Now get ready for a deep cut — it’s the same painting used in the 1989 Batman movie. DC fans can probably easily discern which villain has marked each painting, but it’s the nods like this that elevate the whole thing for fans that are able to recall everything. Ordering the fish and chips will result in a blue-tinged piece of battered fish — hinting at when the Joker poisoned Gotham Harbour. The most egregious nod might be the dessert menu. One dish is called Kiss from A Rose. A little on the nose, but only because everything else is so subtle.

There are a few molecular gastronomy tricks, too, like edible balloons and freeze-dried popcorn that billow smoke out your mouth as you crunch. It's these touches that add to the ambiance and fun of the place, and defuses the impression that Park Row may take itself a little too seriously for something based on comic book source material.

Even the restrooms are a playful tribute to the Joker and his minions, all neon signs and bright lights, while paintings around the restaurants give oblique nods to Gotham and its residents. The menus, too, have little symbols that represent DC villains. These touches are there if you look for them, but they’re not obvious — which is good for those of us that don’t want to see anything more superhero-related ever again. I think the point is you could bring a date who has zero interest in the DC universe and capes, and they’d think it’s a glossy, central London restaurant. Fortunately, the food should be good enough to stand on its own, with an executive chef from a Michelin-starred restaurant. The restaurateur behind it all is known for his work with Heston Blumenthal’s Fat Duck.

The food has the credentials — and prices — to ensure even if you couldn’t care less about DC, at least you’ll have a good meal and a ridiculous cocktail or two.