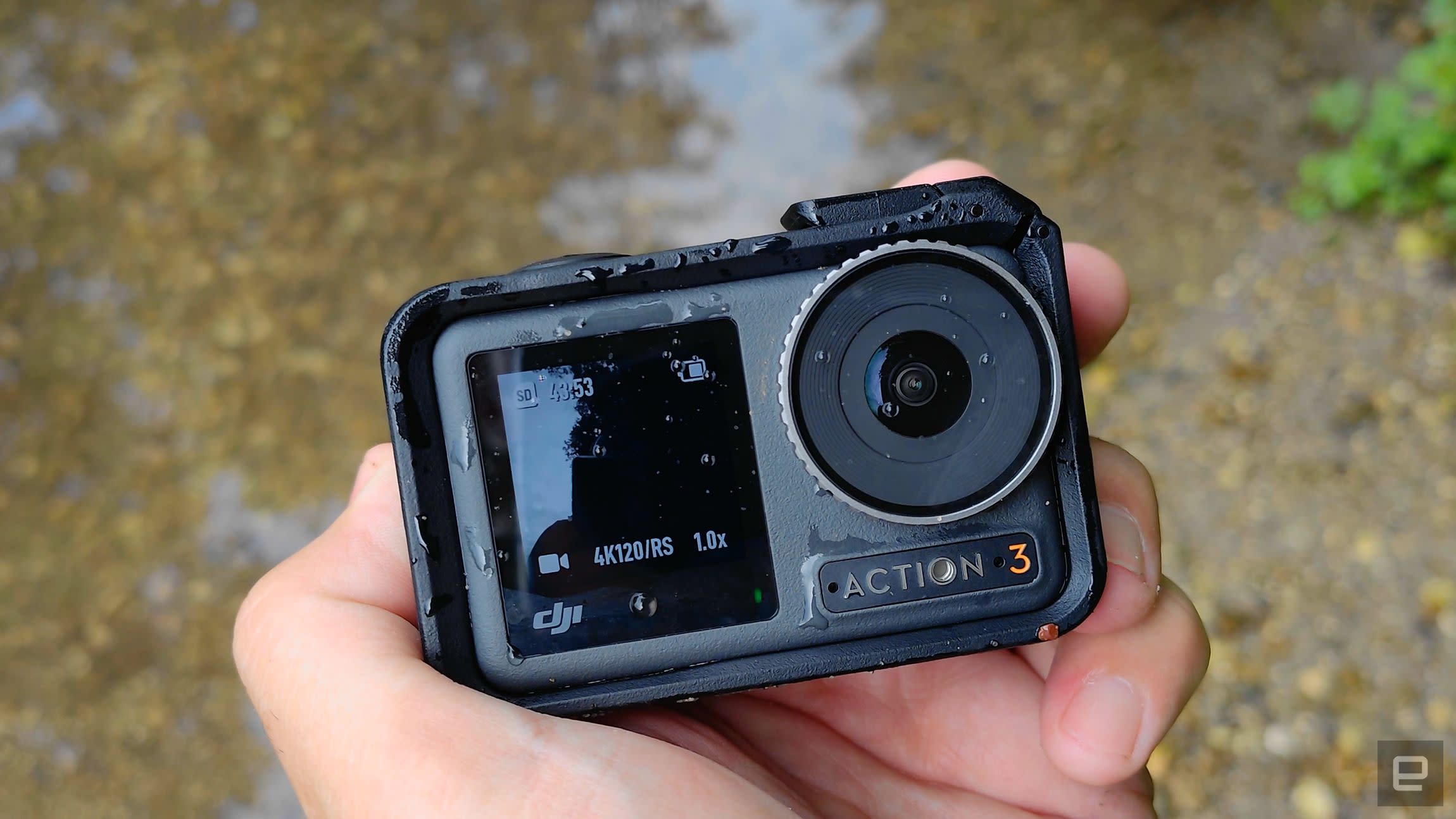 The modular design is gone in favor of a classic action-cam look.

DJI has done another 180 on its Osmo action cam lineup. The original Osmo Action had a classic GoPro look, but then with the Action 2 (no Osmo), DJI went to an oddball modular design. It had some interesting ideas – it was nice and small, and you could add storage, a front-facing screen and more with the add-on units. But it suffered from overheating, proved to be somewhat fragile and was overly complex.

Now with the Osmo Action 3, DJI has brought back the action-cam form factor. It also made numerous small improvements from the mount to the displays to the battery – but kept the previous model’s 1/1.7-inch, 12-megapixel sensor and maximum 4K 120p video resolution.

The rival Hero 10 is in a class by itself with its HyperSmooth 4.0 stabilization, 5.3K 60p resolution and 240fps 2.7K frame rate – and GoPro has teased a new model (“taking it to 11”) arriving in exactly an hour – quite the interesting coincidence. To see how it stacks up, I tested it on a vehicle, bike and on foot, while getting a face-first look at the improved durability.

Without the battery module, the Action 2 has a fairly weak 60 minutes of battery life. DJI has addressed that with the new “Extreme Battery” on the Osmo Action 3 that lasts up to 160 minutes. It’s also the first action camera with fast-charging (via the Multifunction Battery Case) that allows for an 80 percent charge in just 18 minutes, or a full charge in 50 minutes.

It has a slick new magnetic quick-release mount that lets you connect the camera directly to a GoPro-style mount with or without the case. It also allows for easy vertical mounting, making the Action 3 better for social media.

That lets you detach the camera from a bike, car or other mount without the need to remove it from the case. DJI notes that the mounting system “eliminates loose connections and withstands impact such as a rider falling off their bike,” but recommends not doing that.

So naturally, I executed a perfect face plant on my mountain bike, and can confirm that the camera came away unscathed, unlike my face (yes, there’s video). The camera clearly made some contact with the ground but stayed attached to the mount and suffered no visible damage – so kudos to DJI for that.

You also get a front (1.4-inch, 360x360) and rear (2.25-inch, 640x360) screen that are both touch-enabled, making for easier vlogging or self-shooting. Gorilla Glass on the displays aids in the promised impact resistance. The menu system works in the same way as the Action 2, mainly by swiping. You swipe up to change primary settings like resolution and frame rate, down to access the main menu, left to change the shooting mode and right to play back footage. The menus work in the same way on both the front and rear displays.

It’s not terribly intuitive, but probably the best option for a screen that small. You can also connect the camera to DJI’s Mimo app, which is easier to use and more like what you’ll find on its Fly and Go drone apps. That lets you control video and photo captures remotely, while changing all the key camera settings.The app is also used to update the camera’s firmware.

As before, the Osmo Action 3 can work as a webcam, promising higher-quality video and audio than your typical built-in camera for conference calls and livestreams. This works well, with minimal setup and an easy connection via USB-C, though video is very wide. It also lets you livestream via WiFi at up to 1080/30p.

The Action 3 uses the latest version of DJI’s stabilization, Rocksteady 3.0, to eliminate camera shake in all directions up to the maximum 4K/120fps. It's nearly on par with GoPro’s HyperSmooth 4. I tested it on a vehicle over rough gravel roads, riding a bike on trails and roads with the camera mounted on my helmet, and on foot with the included selfie stick. It smoothed out the video perfectly in all those situations, only letting me down once (when I crashed), for some unknown reason.

It also uses DJI’s Horizon features that first arrived on the Osmo Action to keep the image level. HorizonSteady does a combination of shake reduction and horizon leveling, even through heavy bumps and extreme 360 degree rotations. This could be useful for… I’m not sure? Perhaps skydiving, scuba diving or the like. Note that it only works at up to 2.7K resolution and crops the image, no doubt because it requires the surrounding pixels to compensate for rotation.

HorizonBalancing corrects the tilt horizontally within ±45° and allows for steady recording at 4K/60fps. DJI calls it “a good middle ground between RockSteady and HorizonSteady, where a smooth 4K picture in dynamic movement is priority, such as an obstacle course run.” That feature kept my footage both smooth and steady, even through steep banks on a bike through streets.

The Action 3’s camera offers a 155-degree field of view (equivalent to a 12.5mm full-frame lens), considerably wider than the GoPro Hero 10’s 19mm equivalent in linear mode or about 16mm in fisheye mode. It also offers a standard dewarped (linear) view, along with wide and ultra-wide FOVs, with the latter considerably distorted. The zoom function is digital-only and looks pretty poor – you’d be better off zooming in using your video editing app.

As mentioned, DJI is playing up the vertical aspect ratio, with not just a vertical mount and user interface, but vertical shooting capability. The feature allow for 9:16 vertical shooting so you can post social media content at all the available resolutions with no need for cropping.

The Hero 10 is better in low light, though. Despite the larger pixels, the Action 3’s video can get quite noisy, even in daylight in shaded forest, for instance. By contrast (sorry), the Hero 10 delivers clearer footage in similar situations.

With the new model, DJI has added the D-Cinelike color mode from its drones to boost dynamic range and make editing easier with contrasty footage. It also added a new color temperature sensor that automatically adjusts white balance and exposure in a single shot if you’re moving from shadows to bright sunlight or diving into water, for instance. That usually gave me relatively smooth transitions from shaded to sunlit areas, though again, the Hero 10 does a better job in this regard.

The Action 3 is waterproof at depths up to 16 meters (52.5 feet) without any housing and 64 meters with the optional waterproof case. That makes it ideal for snorkeling, light scuba diving, surfing and other watersports without the case, and deeper diving with it. I didn’t get a chance to test that feature other than splashing some water on it, but it certainly looks tight and solid.

Some users complained about overheating on the previous model, but DJI said that a new heat management system allows for continuous 4K 60p recording "until the battery runs out." I ran it at that resolution for 60 minutes with no issues, but at 4K 120p, the camera warns that the maximum recording time is nine minutes. GoPro Hero 10 users have reported recording times around 20-30 minutes at 5.3K 60p or 4K 120p.

Where the Action 2 required the optional display module for extra microphones, the new model has three built-in mics (two on the bottom front and one on top) with wind-noise reduction that offer reasonably high quality sound. You can also plug DJI’s microphone into the USB-C port or use another external mic via a USB-C to 3.5mm adapter.

It offers voice controls and voice prompts that give you the current settings without the need to stop or unmount the camera. Other features include the “Invisistick” feature to hide a selfie stick while skiing, loop recording and quick switching between five custom modes. Finally, it offers a low-power timelapse feature with presets for crowds, clouds and sunsets, along with dynamic timelapse video stabilization that offers smooth exposure and color temperature changes.

So what to make of the Osmo Action 3? DJI wisely returned to an action cam form, while addressing the overheating and other complaints of users who purchased the Action 2. It also introduced features that trump the Hero 10, like the magnetic clip mount and long-lasting, fast-charging battery.

However, it still doesn’t beat GoPro where it really counts: the footage. Stabilization is nearly comparable, but the $400 Hero 10 (with subscription) has superior low-light powers, smoother scene transitions and higher resolution. Another option is the $300 Insta360 One RS, but the the linear frame rates (with the 4K Boost Lens) are lower than either the Hero 10 or Action 3 at 4K, 2.7K and 1080p resolutions — though it's a good option if you need 360-degree capture.

The Osmo Action 3 looks like a good option for many folks, though, particularly at the $329 base price. You can also grab it for $439 in the adventure combo, with three Extreme Batteries and the multifunction case, protective frame, a 1.5m extension rod, flat adhesive base, pair of quick-release adapter mounts and more. DJI also offers a large number of accessories including

All products recommended by Engadget are selected by our editorial team, independent of our parent company. Some of our stories include affiliate links. If you buy something through one of these links, we may earn an affiliate commission. All prices are correct at the time of publishing.
View All Comments
DJI Osmo Action 3: Far more battery life, fast charging and a spiffy new mount