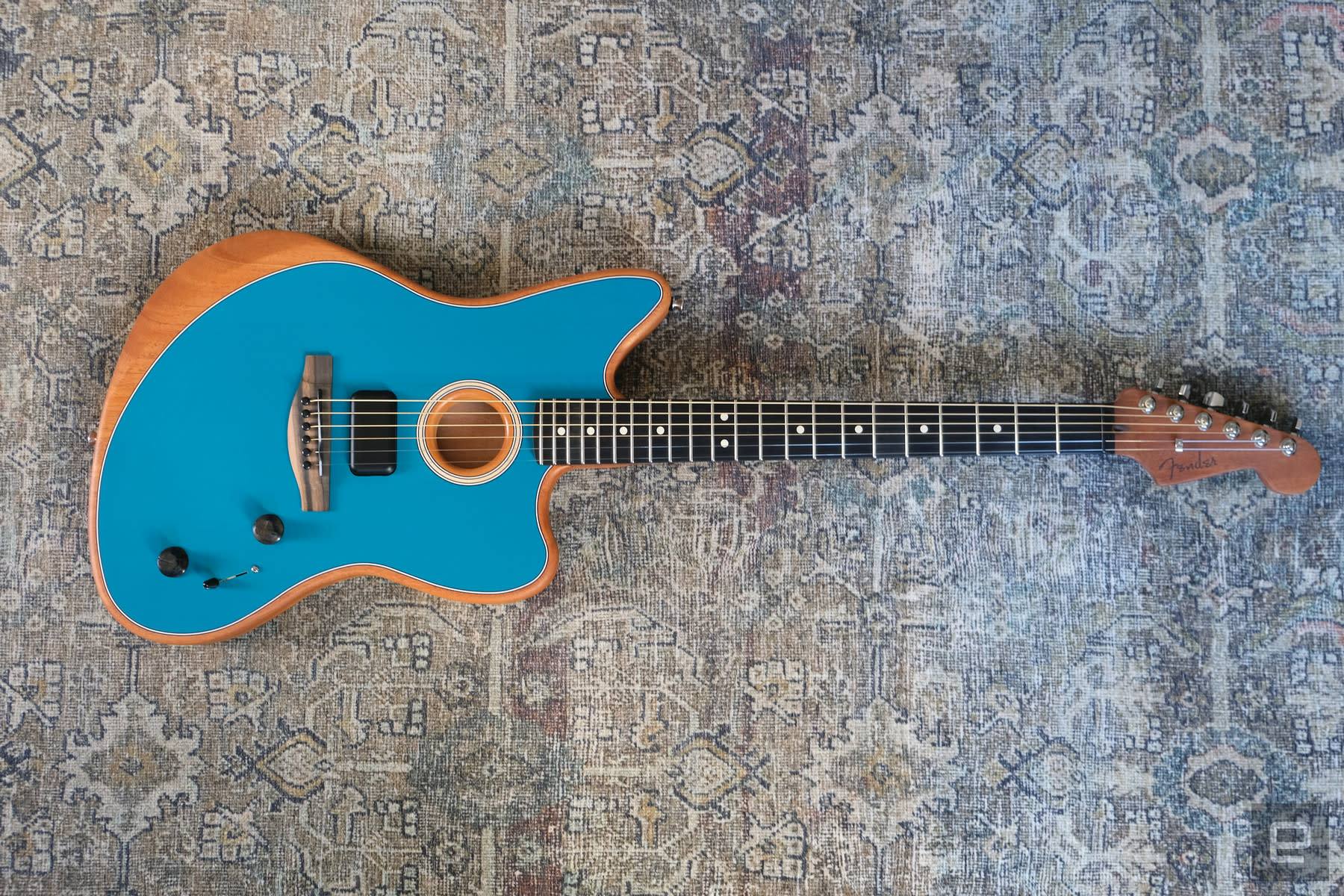 Fender's hybrid Acoustasonic guitar is more than an experiment

The high-tech blend of acoustic and electric sounds is unique and expensive.

When Roberto Baldwin wrote about the Fender Acoustasonic Telecaster for Engadget back in January of 2019 he said, “This is a seriously impressive instrument that will more than likely win over skeptics once they start playing.” Well, confession, I am a skeptic. Something about an acoustic guitar, shaped like an electric guitar, loaded with a bunch of electronics (that are supposed to make it sound more acoustic) just seems… insane.

Well, a few weeks ago Fender sent over its new Acoustasonic Jazzmaster and I tried to approach it with an open mind. And, while I wouldn’t say I’m a convert, I have a better appreciation for what the company is trying to accomplish.

Let’s start with one thing that Fender has won me over on — the design. In photos, the Acoustasonic series looks almost cartoonish. Up close, though, I must admit that the Jazzmaster in ocean turquoise is kind of a stunner. What might look toy-like on a website, in reality comes off as playful, but not cheap.

It doesn’t just look good though, the Acoustasonic feels great. The materials are clearly premium. The satin finish on the wood is amazing and the mahogany neck is smooth and solid. This is not an entry-level guitar. But that should be obvious the moment you see the $2,000 price tag.

The most important thing though, is how it sounds. And this is where things get a little complicated. Not because the Acoustasonic sounds bad (it doesn’t), but you need to set your expectations properly. It’s best to think of it as an acoustic first, that can occasionally pinch hit for an electric guitar.

Unplugged, the Acoustasonic sounds acoustic-ish. It’s not quite as loud as a true acoustic and it lacks the depth, but it’s got more going on than an electric hollowbody. The fact that it’s not as loud as a regular acoustic guitar is actually a pro if you ask me. While I still wouldn’t strum this with all my might in the middle of the night, it’s quiet enough that I can run scales and work on my (atrocious) finger-plucking even after everyone has gone to bed. Being smaller and quieter than my acoustics make the Acoustasonic a great, but extremely pricey couch guitar.

But, the real point is to plug in the Acoustasonic and take advantage of the three different pickups. There’s a Fender Acoustasonic humbucker in the bridge position, then an undersaddle transducer and an “Acoustasonic Enhancer” from Fishman. Those can be combined in various ways using the onboard DSP to create various electric and acoustic tones.

With the fiveway switch all the way back to the bridge you get Fender electric tones. The knob closest to the tail is the “mod” control and it blends between two different sounds. The sounds vary slightly from model to model. On the Jazzmaster the first setting is a semi-clean Fender electric and an overdriven one. Now, I’ve always wanted a Jazzmaster so I was pretty excited to rip some Dinosaur Jr riffs when this showed up, but I’ve got to say — it doesn’t quite sound like a Jazzmaster. With the mod knob rolled all the way back it delivers generically sparkly Fender clean sounds. Not bad, but it’s not quite what I think of when I think “Jazzmaster.” And the overdriven sound is sort of brittle sounding.

Both of the electric modes also sit oddly with dirt pedals. I can’t quite put my finger on it, but they just don’t respond the way you’d expect any other electric guitar to. They didn’t sound bad, but they didn’t sound right, if that makes sense? The clean electric does pair great with big reverbs and delays, though.

(A quick note on the demos: They're all recorded direct into an audio interface with no additional treatment.)

One other thing to note: The Acoustasonic comes fitted with acoustic strings. This delivers a more authentic acoustic sound, but it also means it doesn’t play like an electric. Bends in particular are going to be problematic.

The second position on the pickup selector gives you a Lo-fi Piezo and Lo-fi Piezo “crunch” sound. This is probably going to be the most divisive setting on the entire guitar. The sound of a piezo pickup in an acoustic guitar is very specific and many people loathe it, but personally I think it can be deployed to great effect. This position with just a hint of the crunch blended in was one of my favorite tones. It has a gritty quality that works really well for banging out Neutral Milk Hotel covers.

From here the sounds get much more convincingly and traditionally acoustic. The third position blends the body sensor with an emulation of a Rosewood Auditorium which is a classic, bright all purpose acoustic tone. As someone who doesn’t play a lot of acoustic I found myself gravitating towards this option a lot, simply because it sounds good almost no matter what you play.

The fourth position goes between a Mahogany Jumbo sound and a Mahogany Small Body, the former being full and bassy and loud, while the latter works better for delicate finger plucking. As we’ve established, I am not a great finger plucker, but I found that halfway between the two softened just enough of my heavy handed playing to make Tracy Chapman’s “Fast Car” feel right.

Lastly, in position five you have a Rosewood Dreadnought and a Mahogany Slope Shoulder. The former is great for big booming chords and is very rich. The Slope Shoulder though, was a touch too bright for me, and almost felt tinny.

All of the sounds here are not equal. And I suspect most people will find one or two that satisfy most of their needs. The emulations aren’t 100-percent accurate, either. There’s a resonance and a sustain that even my cheap $200 Fender acoustic electric has that the Acoustasonic can’t quite capture. And they don’t have quite the same dynamic range as a real acoustic. Live, with a full band playing through a PA it wouldn’t be noticeable. But in a quieter, more intimate setting, the differences start to come into focus.

Still, the Acoustasonic is a remarkably versatile instrument. It covers a lot of ground and you’d probably need to buy eight different guitars to recreate every tone here. Fender is pushing boundaries in a way that few other guitar makers are. But, I still don’t know that I could ever rationalize shelling out $2,000 for one. But maybe if the prices come down to the sub $1,000 range I’d consider it.