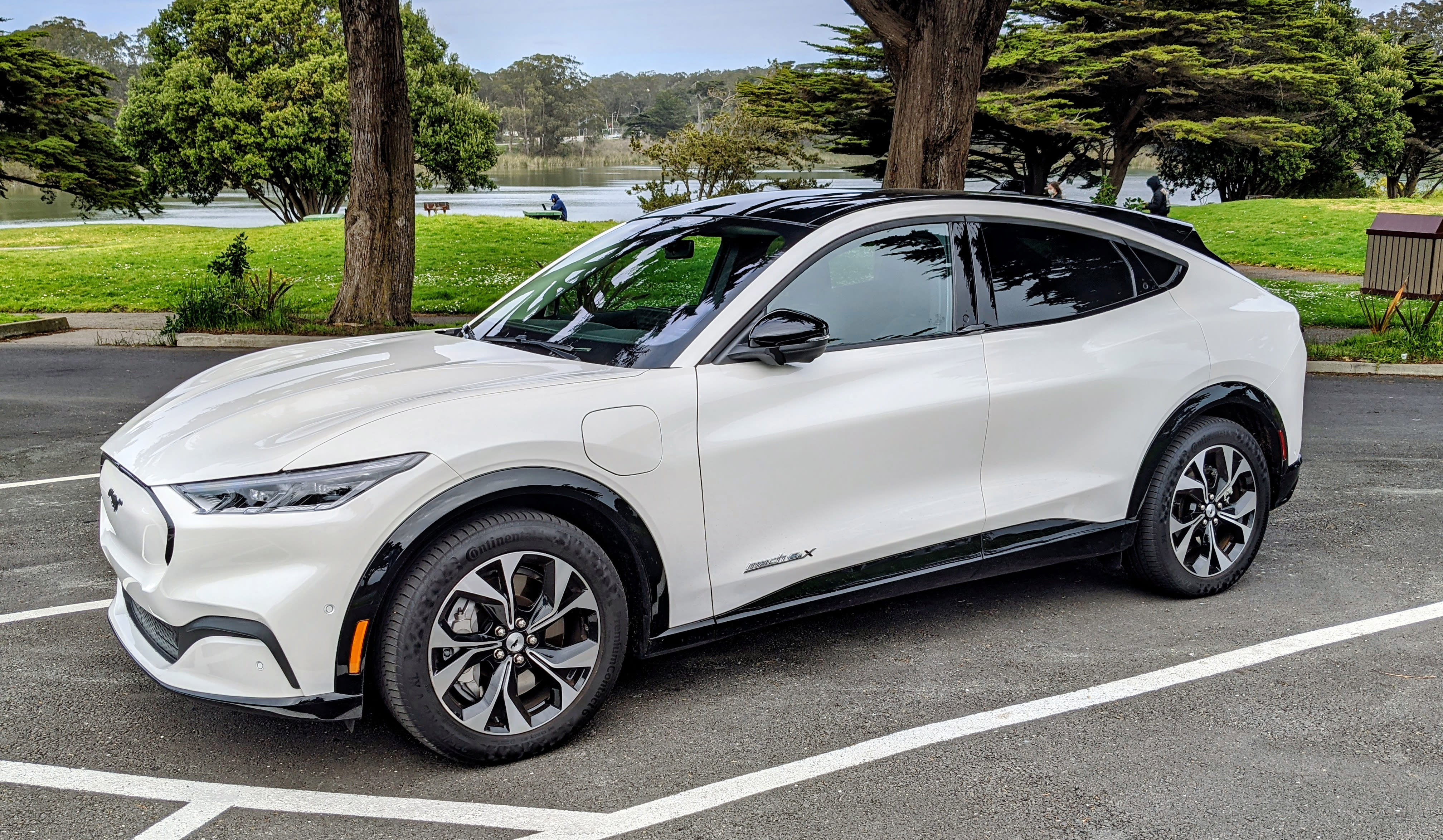 Ford's Mach-E is a stylish and capable EV, but it's no Mustang

Doesn't matter how many horse badges you slap on it.

When I was still a kid, my old man owned a 1965, sharkskin blue Mustang 289. Some of my favorite childhood memories involved spending our Sunday afternoons cruising around San Francisco in it. Now, nostalgia is a hell of a drug, so when I first laid eyes on Ford’s electric Mustang Mach-E at the 2019 LA Auto show, my reaction was a resounding and heartfelt “hard pass.” With its crossover styling, the Mach-E certainly didn’t look like any Mustang of my youth and, given its whisper quiet EV propulsion system, sure as hell didn’t sound — or smell — anything like the carbureted 255 HP, 4.7-liter Windsor V8 I remember from my childhood.

Still, the Mach-E has already won the title of 2021 North American Utility Vehicle of the Year and saw pre-orders for its “First Edition” sell out almost immediately after its debut, so clearly the EV crossover has piqued the interest of American automotive enthusiasts. That begs the question, what actually makes a Mustang, a Mustang? I’ve just spent a week behind the wheel of the 2021 Mach-E in an effort to find out.

The Premium that I received on loan is one of four optional models (not including that short-run “First Edition” which is, again, already sold out): the Select, the California Route 1, the Premium and the GT. They can be spec'd as RWD or e-AWD, and with a choice of standard 68 kWh or larger optional 88 kWh battery pack (a $5,000 option). Those batteries should give you an EPA estimated 230 to 300 miles of range, depending on options and drive types, and anywhere from 266 HP from the Select to a gut-punching 480HP from the AWD GT. The Select starts at $44,995, the Premium will put you back around $49,000, with the Route 1 coming in at $53,500 and the GT at $61,600.

My specific model was the Premium with AWD and the extended 88 kWh battery pack which would retail for $56,400 if it wasn't a loaner. It offers 346 HP, 428 lb-ft of torque, and a range of approximately 270 miles. Aside from the bigger battery and Star White metallic tricoat paint, everything on this Mach-E came standard — that includes the 10-speaker Bang and Olufsen sound system, Qi wireless charging pad, 4G hotspot and Ford Co-Pilot 360 driver assist system. You'll also find USB-A and Type-C outlets in both the front and rear rows so as to keep the jockeying for charger space during road trips to a minimum.

While it may not much resemble its progenitors, the Mach-E’s design makes it easy to spot in a busy parking lot — similar to a Tesla Model 3 but taller with a wider, more aggressive stance. Once acclimated to its dimensions, I came to appreciate the Mach-E’s height. It’s far enough off the ground that you don’t have to constantly worry about scraping the bottom of the door on curbs or require a deep squat to get into it, but not so high you need a step ladder for assistance (looking at you, every full-sized American pickup built since 2009).

It comes in one of seven exterior paint colors, even the most muted of which turned heads when I pulled up to stop lights. Within the first 24 hours of this car reaching my driveway, I had three separate neighbors imploring to go on ride-alongs. And despite its prominent front end and bold lines, the Mach-E maintains a surprisingly svelte drag coefficient of 0.3 — that’s just a touch higher/worse than the new Audi e-tron GT or the Polestar 2, both of which boast coefficients of .24.

The Mach-E’s interior is surprisingly sparse. Aside from the headlights, gear shift and a few knobs on the steering column, virtually every cabin function is controlled through the Mustang’s central 15.5-inch, vertically oriented infotainment display and its integrated volume dial. The infotainment screen is paired with a 10.5-inch letterbox display that replaces the traditional instrument cluster behind the steering wheel. Voice command, audio volume and the track skip/repeat controls are all available as tactile buttons located on the steering wheel. What’s more, the infotainment screen’s ample real estate means that Ford has space to make its digital buttons and sliders generously huge. This is a big help when you’re in traffic and trying to keep your eyes on the road while also navigating through the Mach-E’s various control menus.

That scenario didn’t actually happen as often as I anticipated it would, thanks in large part to the vehicle’s capable voice recognition technology and integration with both Apple CarPlay and Android Auto. Connecting your smartphone, whether its an iPhone 12 or Pixel 4a, is as simple as turning on the handset’s Bluetooth and pairing it with the infotainment system. I got both the iPhone and Pixel to connect to the Mach-E on each of their respective first attempts. Once paired, I could make calls, play my own set lists (rather than rely on the AM/FM/Sirius XM radio) and use Google Maps for driving directions instead of Ford’s onboard nav system. I’d gladly take the Mach-E’s infotainment system over Tesla’s.

The Mach-E’s interior may be sparse, but it is spacious with plenty of leg and headroom to accommodate up to five adult humans. The seats are comfortable and breathable, and the entire cabin feels far less plasticky than what Tesla offers. The feeling of openness within the cabin is amplified simply by craning your next back to look up through the full-glass roof. It’s polarized and tinted so that harmful UV rays and the prying eyes of car thieves can’t penetrate from the outside while remaining clear enough for passengers to enjoy sights both around and above them. The Mach-E also offers 29.7 cubic-feet of storage space in the trunk so you shouldn’t have much trouble fitting in the luggage for those five folks. I’m also a fan of the supremely helpful Fordpass companion app. It offers reminders to drivers of upcoming maintenance, service and recalls. It also always knows where the closest charging station is located and how to get there.

Unfortunately, the most disappointing aspect of the Mach-E driving experience is, well, the driving experience itself. When you get behind the wheel and press the start button, you’re greeted by flashing logos on the display screens, a couple electronic chimes, and that’s about it — no throaty V8 rumble, no rich smell of carbureted gasoline. It’s all very minimalist and, well, a little lacking in soul. You do have three drive modes to choose from: Whisper, Engage and Unbridled — and they all generally work just like they sound.

Whisper is great if you’re running errands around the neighborhood and want to minimize the amount of time you’ll need to spend charging the vehicle once you return (it takes around 10.5 hours to fully charge using a 240V power outlet). It’s low-power and low-power-draw driving. Engage is a solid daily option, giving you a capable mix of power and range. Unbridled is for maximum performance, battery reserves be damned. This driving mode will gently press you back into your seat when you stomp the accelerator, and the EV’s instantaneous access to 100 percent of its torque is lovely when beating other cars off the stop line and getting up to 60 MPH in just under five seconds, but overall the Mach-E just doesn’t have that same bone-rattling, suck-the-fillings-out-your-molars raw power that I expect from my muscle cars. This feels more like someone got a Kia Niro all hopped up on bull shark testosterone and set it loose on the streets.

Of course, the Mustang is far from America’s first classic muscle car to undergo radical design transformations during its model life. I mean, just look at the Chevrolet Impala. It used to look like this but ended up pared down to this when the final vehicle rolled off its assembly line in February, 2020. And neither is the Mustang the only former gas-guzzler to go green. GM is also rumored to be working on electrifying its flagship Corvette, and moving engineers from the Corvette team to its burgeoning EV division.

For what it is, Ford’s first purpose-built EV, a five-seater crossover packed to the gills with modern styling, technology and accoutrements, the Mach-E is a sure bet. The vehicle offers better than average handling and battery performance while maintaining a high degree of daily life functionality — beyond getting you to your destination in as short a time as possible. But as the heir to the Mustang crown, or even just as an EV “sports car,” nah, this ain’t it.