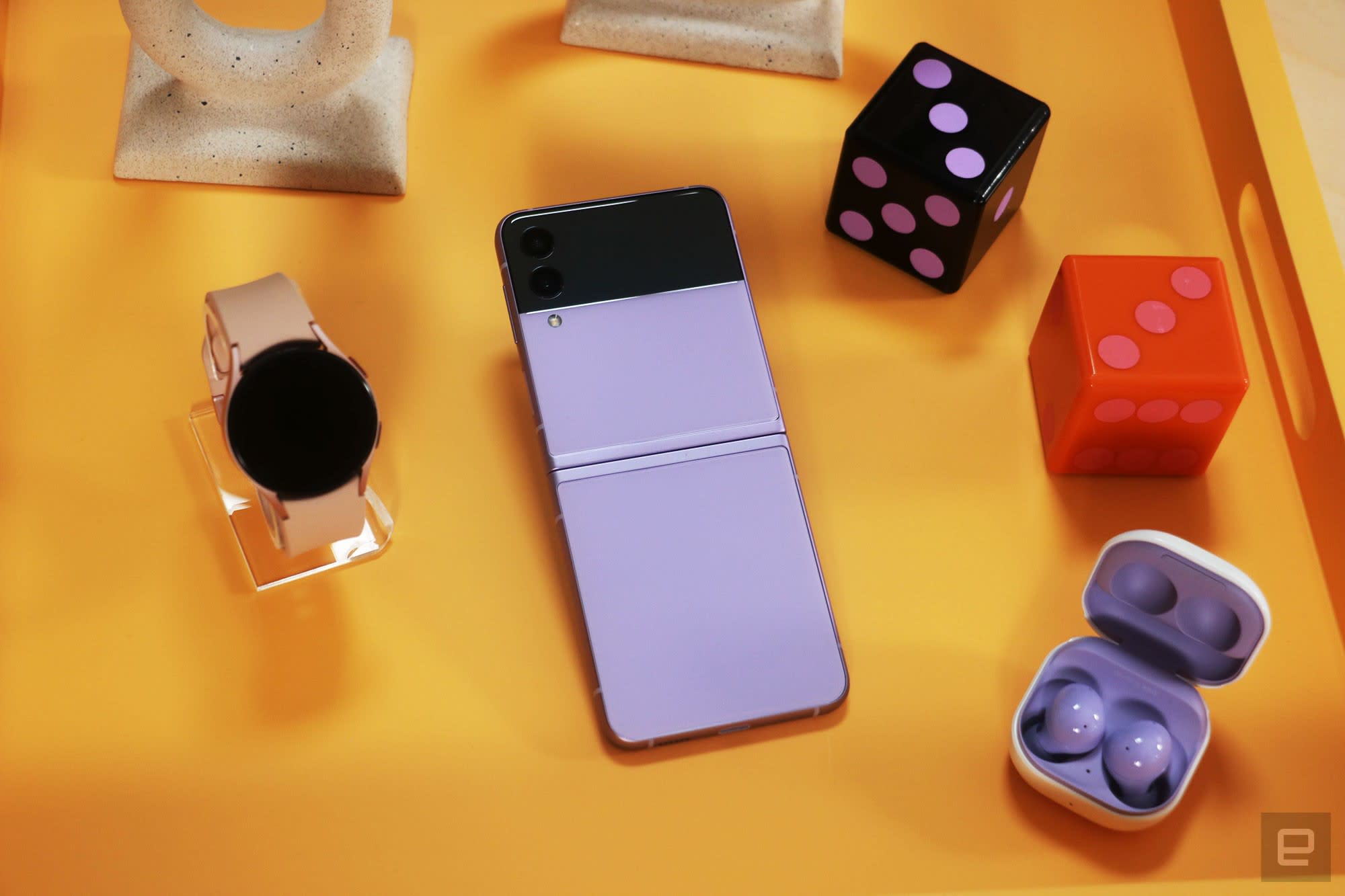 Of all the devices Samsung launched at its Unpacked event today, I find the Z Flip 3 the most interesting. It’s a smartphone that folds in on itself to become half its size and features a new external display that’s four times larger than the one on its predecessor. Though it lacks the S Pen support offered on the Z Fold 3, the Flip 3’s bendable screen still delivers a 120Hz refresh rate that makes scrolling and animation rendering smoother. It’s also water resistant and can process contactless payments when it’s shut, making it more useful in its smaller mode. Just as important, it now costs $1,000, down from $1,300, making it not affordable, exactly, but on par with other flagship smartphones. At a brief hands-on event in New York, I was able to check out the Flip 3’s upgrades and am cautiously hopeful that this is the first foldable I’m ready to buy.

The Flip 3’s non-sequential name might be slightly baffling (the last two models were the Z Flip and Z Flip 5G), but for the most part, all of its upgrades feel self-explanatory. The most obvious is the larger external screen — or, as Samsung calls it, the Cover Display. Instead of the 1.1-inch sliver from the original Flip, the new Cover Display measures 1.9 inches diagonally, giving users four times the screen real estate. This means you can see more of your notifications or widgets at once (up to four lines, according to Samsung). You can also swipe through up to six widgets on this screen, and the options available include things like Samsung Pay, Weather, Alarms, volume control, media playback and step count.

As before, you can tap and swipe to interact with this screen, and I scrolled vertically on the Flip 3’s Cover Display to toggle through clock, volume control and Samsung Pay widgets. It was nice being able to drag the slider on this screen to make the phone louder, but I could also use physical keys on the side. Other widgets are probably more useful, and Samsung will need to encourage developers to create them for their apps. There weren’t any notifications on my demo unit, though, so I didn’t get to see how that would look. Side-swiping on this panel also didn’t do anything, though this likely depends on what the widgets themselves are designed to support.

The other benefit of a larger Cover Display is when you’re using it to frame a selfie with the Flip 3 closed. Of all the nostalgic value that using a flip phone brings, snapping a selfie with a tiny outside screen and camera is the one thing that immediately brings me back to the 2000s. (I was one of many who used a pink Motorola Razr V3 circa 2003-4.)

Of course, I’m not suggesting you rely on the Flip 3’s relatively cramped Cover Display and 10-megapixel selfie camera as your primary means of shooting portraits. But in a pinch, the new larger window is more useful than its predecessor’s in gauging what you’re snapping. I used it to capture a couple of selfies at my demo session using the volume buttons on the phone’s edge as triggers. Though I couldn’t see all of the scene in the viewfinder, it was enough to get my colleague and I centered in the frame.

Open up the Flip 3, set it up in a half-folded mode, and you’ll see the Camera app expand to take up the whole 6.7-inch screen. Samsung calls this view Flex Mode, and compatible apps automatically rearrange themselves so that their layouts align with the top and bottom halves of the display. In the Gallery app, for example, the bottom section becomes sort of a navigation pad where you can swipe sideways to scroll through your pictures in a carousel. In the Camera app, the viewfinder takes up the top half while controls sit on the bottom.

I didn’t have time at our briefing to try out every app, but so far I’ve noticed that Camera and Gallery supports Flex Mode while Photos, Maps and Chrome do not. The ones that do also switch between Flex Mode and full-screen very quickly, which is a promising sign of the Flip 3’s processor’s performance. The device will have the same chipset as the Fold 3, which in the US is the Snapdragon 888, and it’ll come with 8GB of RAM along with 128GB or 256GB of storage.

Samsung said it’s working with developers to optimize more apps for Flex Mode and that it has already enabled at least 50 percent of the most popular options. Thankfully, it’s not like you can’t use your favorite app if it’s not optimized for Flex Mode; it just won’t be laid out as nicely.

In addition to the larger cover display, the Flip 3’s upgrades over its predecessors include support for adaptive 120Hz refresh rate on its internal screen. This made quickly scrolling through the list of articles on Engadget’s homepage look smooth, and will likely make the system feel faster overall. Though the 22:9 aspect ratio is taller than most phones today, I didn’t find it too jarring. Meanwhile, images looked colorful and crisp on the Full HD+ display.

One more improvement that Samsung made on the Flip 3 is its water resistance rating of IPX8. There weren’t any setups at the demo event for me to test this out, so we’ll have to take Samsung at its word for now.

Like the Z Fold 3, the new Flip features some overall durability improvements. Samsung used a new “Armor Aluminum” in its metal frame and hinge that makes the phone 10 percent stronger, while the company said the Gorilla Glass covering the device is 50 percent more durable than previous models. The main screen also uses a new protective film that’s said to be stronger and more scratch resistant. These durability claims aren’t something I can vouch for yet as I didn’t try dropping or scratching our demo units, but I can say that the Flip 3’s hinge moved smoothly and stayed open at various angles. I was also able to close the phone with one hand, albeit without the same satisfying thunk that Razrs made.

Despite all its durability upgrades, the Flip 3 is about just as light and thin as the Flip 5G, though the new phone is slightly smaller. Samsung is offering the Flip 3 in seven colors this time around, and while I still love the purple version, the green option is also gorgeous. Oh, and don’t forget the Thom Browne edition that will also be available in a Team USA color scheme in a nod to the Olympics.

Everything else about the Flip 3 is pretty much the same as before. You’ll still get a 3,300mAh battery, a 12-megapixel rear camera and a 10-megapixel one for selfies, which produced nice enough samples during my hands-on. But battery life and image quality are among the many things we’ll need proper review units to test out in the real world.

Though I’m excited that Samsung has managed to drop the Z Flip 3’s price down to $1,000 while adding water resistance, improving the overall build and Cover Display, I’d like to see how the software updates add to its experience as a daily driver. But from my brief preview, the Z Flip 3 might be the first foldable device I’m ready to invest in and could finally make the category ready for the mainstream.