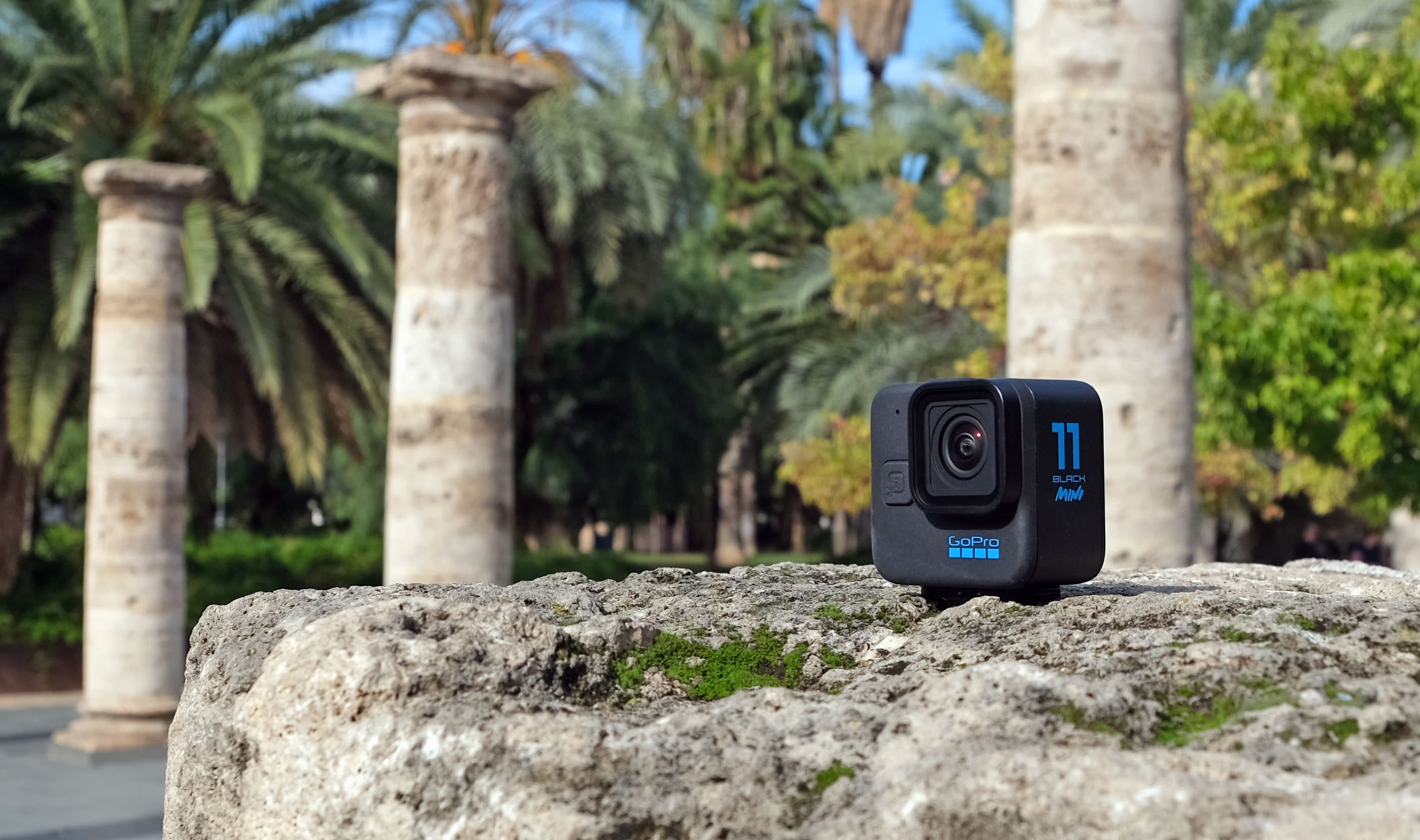 The smaller camera won't be for everyone but for some it'll be everything.

GoPro’s annual Hero Black update came with a small surprise this year. Instead of just the usual flagship camera, a “Mini” version was also unveiled. Alas, only the regular Hero Black was available when they were announced, so if the diminutive version caught your eye you had to wait until Oct 25th. And then you had to wait just a little bit longer. But finally it’s here and it’s an interesting proposition.

Of course, the pitch is simple: A Hero 11 Black but smaller. The Mini is about 3/4 of an inch narrower than the regular Hero 11 Black when you look at it head on. But it’s also a teensy bit taller and about 5mm deeper. It’s obviously smaller overall, but there’s much less of a difference than there was with the Session cameras and the flagship of the time. As with that camera, though, the main trade off is the lack of viewfinder/displays. That’s a big deal, so that reduction in size really has to appeal to your use case. And I can say right up top here, for most people, it likely doesn’t.

To put things in perspective, at the time of writing, the Mini sells for $299.98 with a GoPro subscription, while the regular Hero 11 Black is listed for $349.98 with the same deal ($449.98 / $549.98 respectively if for some reason you can’t take the subscription offer). That’s either a $50 or $100 difference, depending, for the overall compromises and relatively minor difference in size. And there are additional differences beyond the lack of screen that you’ll want to consider. For example, there's no photo mode this time around.

To be clear, yes you can get photos out of the camera (there’s one right above this sentence) but you’ll be pulling frames from video. And while that’s pretty easy, it’s definitely not as simple as choosing photo mode and pressing a button (also your photos might end up 16:9 if that’s what the source material is). Taking photos is definitely something you might assume you can do natively and I am obliged therefore to tell you that you cannot.

Of course, as mentioned, there’s no touchscreen which affects how you access the menu. You can navigate the settings via a small display on the top that will send GoPro veterans right back to the Hero 4 (and earlier) days. The options here are slightly limited, with just shooting mode, mode settings and some (but not all) general settings up for grabs. Everything else you’ll be doing through the app.

I personally prefer doing most things on the camera itself, and then use the app when the camera is mounted out of reach, but I didn’t find it hard to transition to doing most everything in Quik. This only really becomes an issue if you’re doing something where your phone isn’t nearby. Surfing, for example, might need a little bit of pre-planning to make sure you’re set up before you get in the water.

Relatedly, I noticed the camera goes into standby very quickly. After just eight seconds of inactivity the Mini will turn itself off (15 if you’re in the settings menu). This is obviously to save battery life, but it also means if you were just pausing for thought, you have to turn the camera back on, and possibly re-connect to the camera over WiFi and then pick up where you left off. It feels like an easy fix to add an option to change the amount of time, but for now, that’s how it is.

If you are used to using GoPro’s video presets, it’s worth knowing there’s only one here on the Mini. Unlike the regular Hero 11 that offers many along with the option to create your own for different shooting scenarios, the Mini has the essentials and not much else. It just means you need to change your video settings on a per-shot basis (like life before GoPro introduced presets) but it was something I found myself missing.

As for battery life, there’s good news and bad news. The bad news is that the sealed-design means you can’t swap out a new cell should you run out of juice. The better news is that the Mini uses the new longer-lasting Enduro battery. GoPro claims you should get about an hour of continuous recording at the highest quality, or nearer to two hours are less demanding settings. This feels about right based on the short time we’ve had with the camera and also inline with the Hero 11 Black, which uses the same battery.

Since the latest redesign and addition of 5.3K video modes, some people had issues with the camera overheating while recording indoors, with the camera in a fixed position. The company issued a software update in response including a new “stationary/tripod” mode.

When we tested our Hero 9, 10 and 11, we didn’t experience that issue, but with the Mini, it happened pretty quickly (in under 10 minutes) when recording at 5.3K/60fps. In less power-hungry modes the issue disappeared, so anything 1080p, for example, was fine. GoPro’s messaging here is that the Mini is an outdoor camera, designed for mounting on you or your gear. So, if you were looking at this for a potential static/indoor application, it’s not the camera you want, even according to GoPro.

If that seemed like a lot of words about things you can’t or shouldn’t do, then the good news is that, from here on out, it’s all about what the Mini can do. The short version of that is, mostly everything it’s bigger sibling can. But it’s worth calling out some specifics, and even a couple of things that are unique to the smaller camera.

The first thing I wanted to confirm was that the Mini had full 360-degree horizon lock. This was something new to the Hero 11 Black and it was one of the standout features this year. There was no reason why the Mini wouldn’t be able to do this, with it having the same sensor and all, but consider this confirmation of that nonetheless.

The same goes for the new Hyperview mode, which squeezes every pixel from the sensor into a 16:9 video. It’s incredibly immersive and makes even the most mundane of activities seem surprisingly dynamic. And of course, full-frame shooting is also here, so you can grab everything the sensor sees and then punch out different mobile-friendly or desktop videos from the same source file.

Where the Mini excels, unsurprisingly, is with anything body mounted. The smaller form-factor and lighter weight make it a much nice experience for head or helmet mounting. In fact, I’d go as far to say that the Mini is all about being a helmet cam. Not least because of the second pair of mounting fingers on the rear that make it easier to fix in a forward-facing position.

And this really feels like what the Mini is all about. If you don’t want all the bells and whistles and just want an honest-to-goodness action camera with all the Hero 11 Black video credentials, then the Mini is it. It also feels like it would make a good secondary camera for a different angle. Similarly, if you use a full-size GoPro for drone FPV footage (rather than the dedicated “Bones” camera) then the Mini is also a great option for that - plus you get a camera you can use elsewhere, too (unlike Bones).

All products recommended by Engadget are selected by our editorial team, independent of our parent company. Some of our stories include affiliate links. If you buy something through one of these links, we may earn an affiliate commission. All prices are correct at the time of publishing.
View All Comments
GoPro's Hero 11 Black Mini fills a small niche