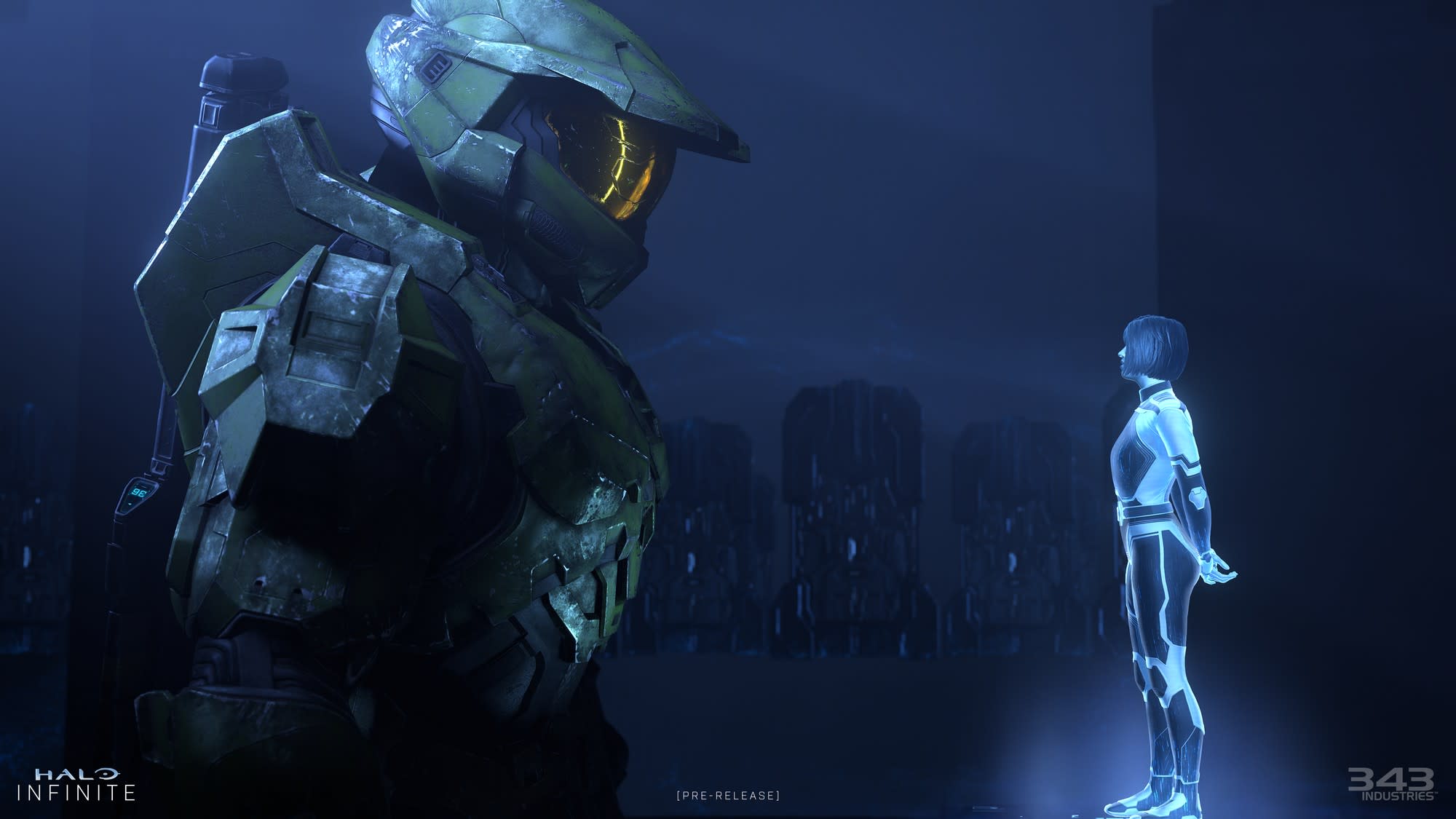 'Halo Infinite' is best when it stops being 'Halo'

The Master Chief returns, and this time you finally have choices.

Stop me if you've heard this one before: In Halo Infinite, you play as the Spartan super-soldier Master Chief who must defeat a dastardly group of aliens (somehow, the Banished returned!) before they take over a mysterious ring world. Playing through the game's first few missions is like plowing through an abridged Halo campaign, for better or worse. It starts off with Master Chief drifting in space, where he's miraculously rescued by a human soldier. In short order, he was back in action taking down feisty grubs, plowing helmet-first into increasingly bigger firefights and going toe-to-toe with angry looking space ape. Been there, plasma grenaded that.

To be blunt: Halo Infinite's opening had me worried, especially after its year-long delay. Sure, it was nice to be back in Master Chief's shoes after six years, but it still felt like a retread, even with the addition of a new grappling hook. It was as if I was walking down the same corridors and fighting enemies that I already faced in Halo 4 and Halo 5: Guardians, the previous two games developed by 343 Industries. Once again, I feared that the studio would be too afraid to push Halo into fresh territory and reach the heights of Bungie, the franchise's creator. (Bungie's Halo 3: ODST, in particular, was a unique attempt at delivering a human-focused story in a world filled with super soldiers.)

But a few hours in, once I showed that ape who was boss and acquired a Cortana-like AI called "The Weapon," Halo Infinite finally opened up. I made may way to the nearby semi-destroyed ring world, dubbed "Zeta Halo," along with my soldier buddy. After clearing out a Forward Operating Base (or FOB) filled with baddies, I was presented with something rarely seen in Halo: choice. Before me lay a chunk of Zeta Halo that I could explore freely. Judging from my map, which was populated by taking over that FOB, there was plenty to do. I could rescue some nearby soldiers, go hunt for new equipment, or take on notorious targets. This Halo was my oyster (or more fittingly, a broken disc-shaped sea creature of some kind).

I chose to embrace the freedom. My next story mission could wait. As I wandered around Zeta Halo, a grassy environment that's clearly reminiscent of the first entry, I quickly learned that the grappling hook was more than just a way to climb up. It also gives you a bit of a speed boost as you traverse the open world. Movement in Halo has always been slow, a quirk that likely made the game easier for players to grasp when console shooters were rare.

Halo Infinite still feels a bit like you're trying to hop around on the moon, but I appreciated being able to zip forward quickly by grappling onto a nearby hill or tree. You can also dash, something that the series didn't have until its fourth major entry, Halo Reach, but this time around it's more like a light jog. Time and again, it was the grappling hook that saved my Spartan butt if I needed to quickly run from a battle. It also gives you the freedom to approach enemies from multiple angles. When I noticed some soldiers pinned down by the Banished, I was able to scale up the side of a cliff and clear out the aliens easily.

While Halo Infinite technically presents you with an open world, it's more akin to a slimmed-down Far Cry map than something filled with detail like Assassin's Creed or Grand Theft Auto. Zeta Halo feels large, but it's not exactly teeming with life (though it's nice to see a few stray animals hopping around). Still, the ability to chart my own path felt thrilling, and investigating waypoints was well worth it. Helping those soldiers, for example, gave me valor points which can unlock new weapons at FOBs. There are also Spartan Cores throughout the map, which can be used to upgrade your equipment (I was quick to beef up my shields and make my grappling hook faster.) Everyone will be able to turn Master Chief into their own customized super soldier.

As you'd expect, everything in Halo Infinite ultimately comes down to you blasting aliens into a pulp. Sometimes, you blow stuff up. But 343 Studios still found a few ways to change up the gameplay. When you go after a High Value Target, for example, you have to be prepared take on a over-powered enemy that's typically surrounded by plenty of goons. Some of those encounters took me several tries on the Heroic difficulty setting, which forced me to optimize and reassess my attack strategy. Taking down those notorious bad guys nets you unique guns and plenty of valor points.

For a bigger challenge, you could also try to take over Banished Outposts teeming with enemies. Tackling one of those down was a multi-step process: I sniped the tougher looking soldiers from afar, grappled along the rooftops, and manually opened up and destroyed four fuel cores. What started out as a semi-stealth mission turned into an all-out frag fest—at one point I hopped into a trusty Battle Tank and started blasting Banished ships left and right. The escalation of that encounter left me breathless.

I waited until the very last moment before I tackled that overdue story mission—I just wanted to explore every nook and cranny of the world before my preview session was up. By that point, my shields and grappling hook were upgraded several times, and I fully grasped the importance of approaching combat encounters thoughtfully. As I peered at the looming tower before me, I noticed a rocky outcrop along one side. A bit of grappling led me to a sniper's nest, where I found a rifle that helped me take out some of the more dangerous Brutes.

I could only do so much damage remotely, though. So I held my breath, took a running start, and leaped towards several Banished soldiers patrolling a nearby tower. I couldn't quite clear the distance on my own, but thankfully my trusty grappling hook pulled me right up. At that point, I was in a typical Halo firefight, but it felt all the more special because I chose how to get there.

Once I made my way into the center of the tower, a new tool awaited me: the threat detector. Think of it like a three-dimensional radar that can be deployed on any surface. It shows you exactly where enemies are hiding for a limited period. That was particularly useful as I made my way up every level of the tower, which was filled with Banished aliens waiting around corners and hiding behind debris. The threat detector was also key to defeating that mission's boss, a Banished leader who spent the entire fight cloaked in invisibility. (Not so sportsman-like, I know.)

Despite the rocky start, I came away from my glimpse at Halo Infinity's campaign with the urge to keep exploring. I wanted to optimize my Master Chief build, and I was eager to see if the game would somehow wrap up his relationship with Cortana, his previous AI who turned into a galactic threat. Mostly, though, I was curious to see what else 343 Industries had in store. After a decade leading the franchise, it seems like the studio is finally ready to let Halo evolve.

That's also true of Halo Infinity's free-to-play multiplayer mode, which Microsoft launched this week as a celebratory surprise. As someone who mainly plays Halo for its campaign, I really didn't expect much from the game's multiplayer, but it still managed to hook me during 343's closed betas. Now that it's open to everyone (though still a beta), I'm even more impressed. The maps are fun and inventive, the gunplay feels tight, and every match feels like a life-or-death battle between super soldiers. It's the closest the franchise has come to replicating the glory days of Halo 3 (or back when I was hooked on the first game in college). And judging from its massive popularity on Steam, where more than 270,000 people were playing on launch day, it seems like for many gamers, the wait was worth it.

All products recommended by Engadget are selected by our editorial team, independent of our parent company. Some of our stories include affiliate links. If you buy something through one of these links, we may earn an affiliate commission. All prices are correct at the time of publishing.
View All Comments
'Halo Infinite' is best when it stops being 'Halo'