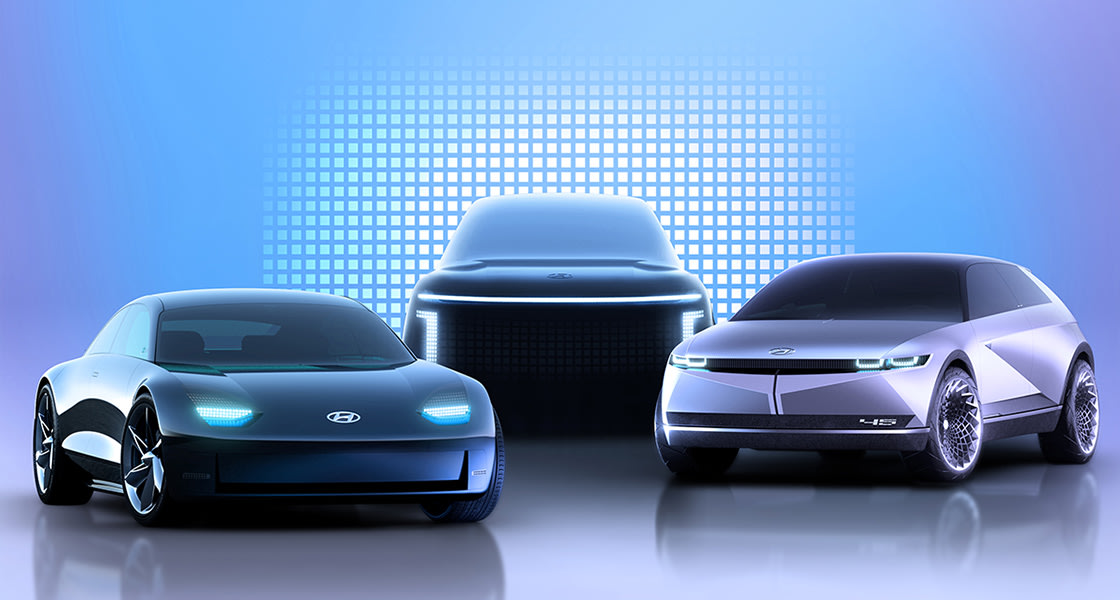 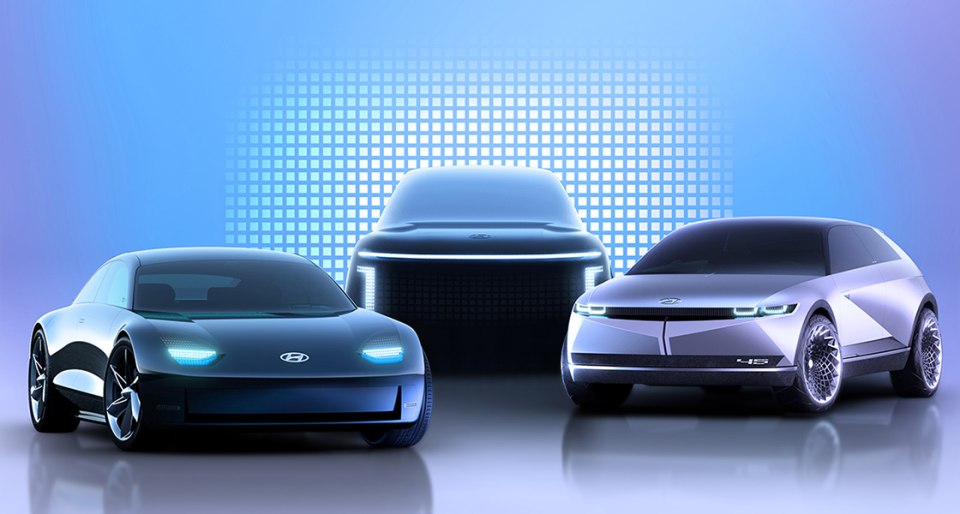 Hyundai has announced that it will transform the Ioniq name used for its current EV into the Ioniq sub-brand dedicated to all-electric cars. That means Ioniq could become much like to Hyundai what Polestar is to Volvo.

Hyundai revealed plans to launch three EVs under the new brand, starting with the Ioniq 5 in 2021 and the Ioniq 6 and Ioniq 7 scheduled for 2022 and 2024, respectively. In Hyundai’s new naming scheme, odd-numbered vehicles represent crossovers or SUVs, while even-numbered models will be sedans.

The Ioniq 5 will thus be a crossover (shown above, at right) and based on Hyundai’s angular Frankfurt Motor Show concept, the retro-styled, Pony-inspired 45 EV. As Autoblog pointed out, the Ioniq 5 may have already been seen in testing, and while heavily camouflaged, it bears only a passing resemblance to the concept vehicle.

Meanwhile, the Ioniq 6 (top left) is based on the Prophecy, a slippery concept car that Hyundai said would eventually be produced in some form. Finally, we’re seeing a tease of the Ioniq 7 for the first time. Hyundai said it will be a “large SUV” and the illustration shows a slim Rivian-like light that covers the front of the car, along with side lights that may use the same dot matrix tech featured on the 45.

All the vehicles will use Hyundai’s E-GMP electric vehicle platform shared with Kia’s electric cars. Like with other EVs, E-GMP keeps the powertrain below the floor, opening up what Hyundai calls a “‘smart living space’ with highly adjustable seats, wireless connectivity and unique features such as a glove box designed as drawers.” It also said that infotainment and dash displays will be “simple, intuitive and ergonomically designed.”

The current Ioniq model comes in EV, PHEV and hybrid versions and will carry on separately from the Ioniq brand with the current models: Ioniq Hybrid, Ioniq Plug-In and Ioniq Electric.

Hyundai wasn’t able to hold a live launch event for the new brand due to the pandemic, but it did try to make a splash. To celebrate, it added some electric lights to the London eye to transform it into a giant “Q.” We’ll no doubt hear more about the upcoming vehicles over the next year.

In this article: Transportation, Hyundai, EVs, Ioniq, Ioniq 5, Ioniq 6, Ioniq 7, brand, news, gear
All products recommended by Engadget are selected by our editorial team, independent of our parent company. Some of our stories include affiliate links. If you buy something through one of these links, we may earn an affiliate commission.