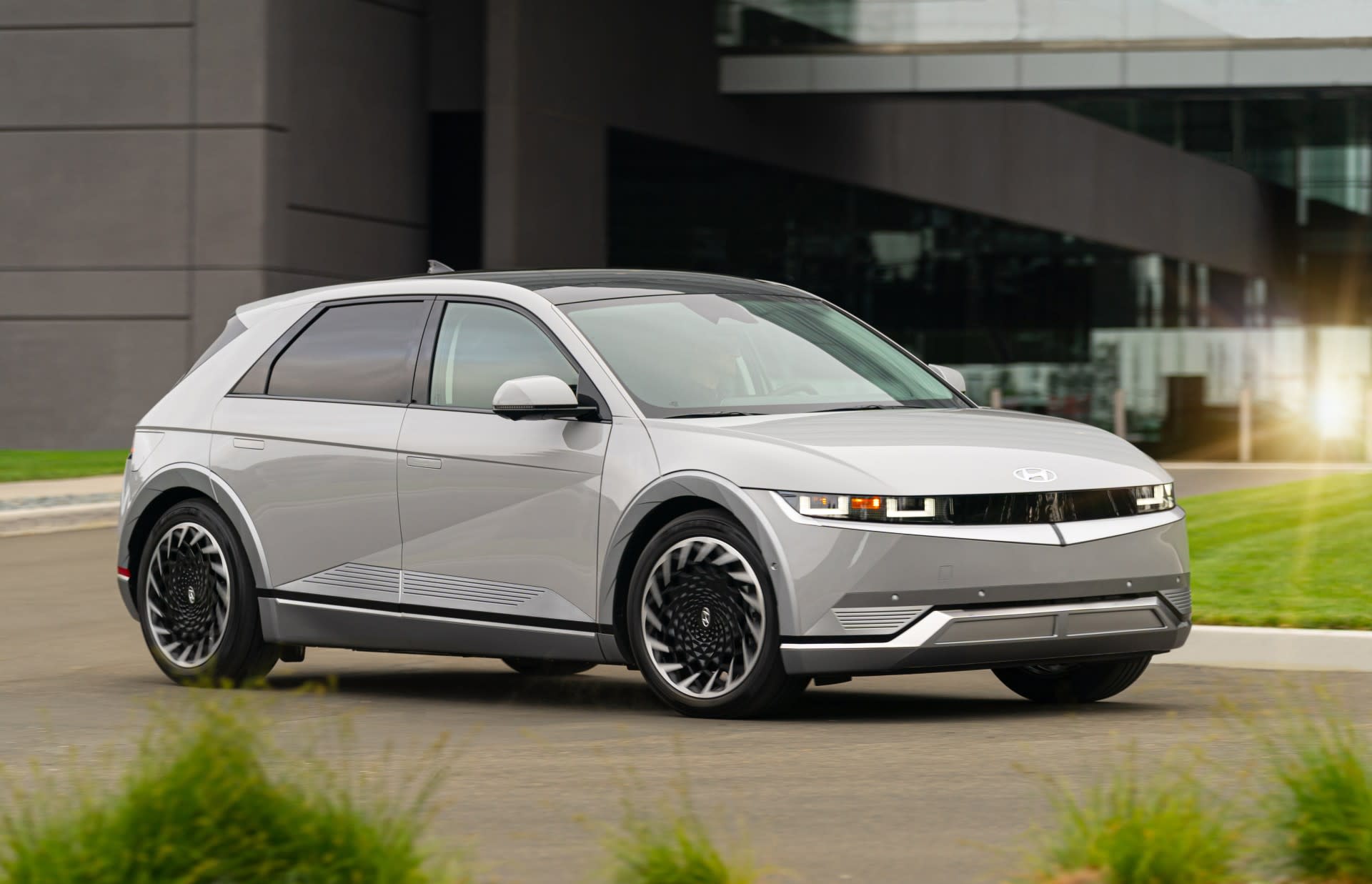 Its 800V electrical architecture can add 62 miles of range in just 5 minutes.

Hyundai has been slowly dropping clues about the capabilities of its upcoming 2022 Ioniq 5, the first EV built on the company's new E-GMP vehicle platform, since its initial teasing at the Frankfurt Auto show last August. But the time for hints has passed as the Ioniq 5 made its official North American debut on Monday.

We've already gotten a pretty good look at what will be under the Ioniq 5's hood when it reaches dealer showrooms: a 72.6-kWh (or optional 77.4-kWh) battery drives either single (2WD) or dual (4WD) e-motors to deliver up to 300 miles of range, 320 horsepower, 446 pound-feet of torque, 1,500-pound tow capacity and a 0 to 60 MPH in under 5 seconds, depending on your vehicle's loadout.

Its 800V electrical architecture allows it to charge at up to 350 kW meaning it can fill from 10 percent to 80 in 18 minutes or add 62 miles of range in just 5 minutes. A level 2 charger will do the job in 6 hours and 43 minutes. As an incentive to prospective buyers, Hyundai is offering unlimited free 30-minute charges on Electrify America's 600-station network for the first two years of Ioniq 5 ownership.

The Ioniq 5 will also be the first EV to offer Hyundai's new windshield-based AR HUD. The Kona EV that we reviewed back in the pre-COVID beforetimes featured a slick pop-up HUD that emerged from the steering column when in use. This new one instead projects information — navigation instructions, ADAS warnings, and even an unobstructed 360 degree view of the vehicle's exterior out to 4 feet — directly onto the windshield itself.

The HUD is paired with a 12-inch central infotainment system that could become quite handy in the near future. See, Hyundai is currently developing a secure in-car payment system that would essentially store the driver's credit card info in the infotainment system, enabling them to pay for anything from EV charging port time to fast food and coffee to parking spots. Imaging never having to rummage through the back seat cushions looking for quarters ever again. That's living the dream right there. There's no word on when this feature might actually roll out but Hyundai has set its biannual OTA update schedule for April and October so, fingers crossed for fall.

Apple Carplay and Android Auto compatibility both come standard and the Ioniq 5 will work with the latest version of Hyundai's Bluelink connected car service which enables drivers to control various onboard systems and receive status updates through their smartphones. While in the vehicle itself, drivers and passengers alike can control any number of features — including the AC, heated seats and steering wheel, even opening and closing the trunk hatch — with simple voice commands.

We still don't know what Hyundai plans to ask for the Ioniq 5, though we do now know where we'll see them first. According to the automaker, the Ioniq 5 will be "sold in Hyundai stores in the 10 zero-emissions vehicle (ZEV) states" plus Texas, Florida, Illinois, Georgia, Pennsylvania and Arizona in the second half of this year, before a wider rollout happens in 2022.