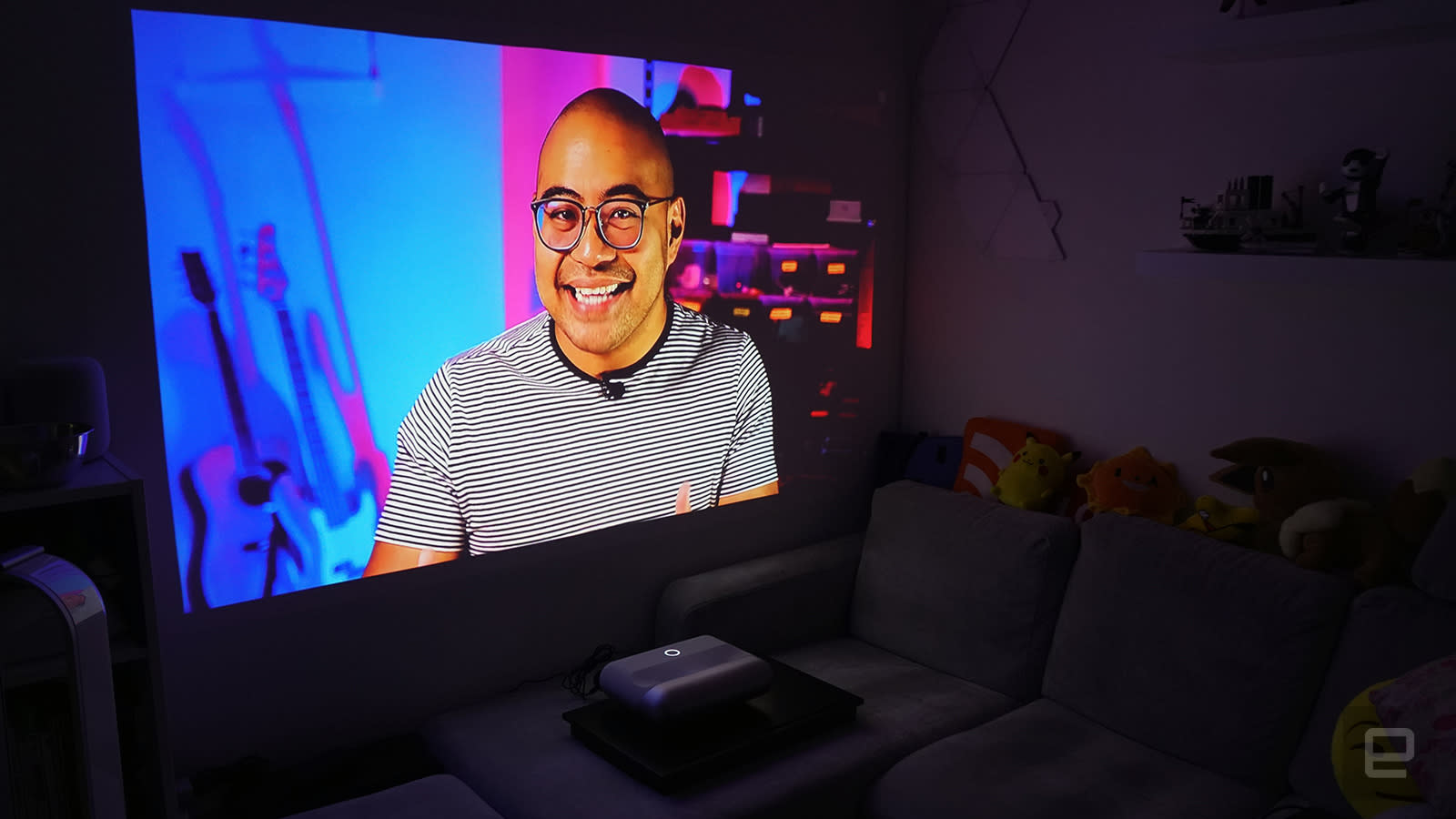 Ultra-short-throw projectors save you the trouble of finding space somewhere in the middle of the room, which is ideal for cramped apartments like mine. These machines come at a cost, though, with decent models starting at around $2,800 as we note in our recent projector guide. Xiaomi's Mi Laser Projector is a little more affordable with a sub-$2,000 list price, but an up-and-coming Chinese brand called JMGO wants to significantly lower the entry barrier to ultra-short-throw projectors. It's launching two models: the $699 O1 and $859 O1 Pro, the latter "co-engineered" with Leica.

Chances are you might not have heard of JMGO, but it's actually been around for 10 years and claims to be one of the top projector brands in China. It's certainly hard to miss this brand's projectors around shops here in Hong Kong, at least. Given that this is Engadget's first time trying a JMGO device, though, and given that both models are launching globally via Indiegogo, we borrowed a Chinese version of the futuristic-looking O1 to see if there's a catch.

The O1 is an Android-powered ultra-short-throw projector, with an LED light source rather than the sort of laser light source you'd find on more expensive machines. With a throw ratio of 0.25:1, it projects a recommended 80-inch screen size when it's placed 10 inches away from the wall. You can push this up to a 100-inch screen by increasing the wall distance to 14 inches, or go down to a humble 65-inch screen with a 5.5-inch distance.

The projector has a native 1080p resolution, along with 120-percent coverage of the NTSC gamut, 800 ANSI lumen brightness and 5,000:1 contrast ratio. While this is far from the brightest projector on the market, the O1 still has a smart eye protection system, which automatically dims the picture when a human or pet is detected within the projection range, just in case they look directly at the light source.

While some of the specs are nowhere near as impressive as the competitors' laser counterparts, LED does bring the benefit of a longer lifespan — 45,000 hours here instead of, say, the 20,000 hours Xiaomi's model offers. Auto focus and auto keystone correction are available, and you can also tweak these manually if needed. There's also a wall color calibration feature to help boost accuracy.

On the back, there are two HDMI sockets, two USB connections, a LAN port and an optical-in socket for audio. For those who really care about specs, the O1 has a quad-core, 4K-friendly MediaTek MT9669 processor plus 3GB of RAM and 16GB of internal storage. As you might have guessed, you also get WiFi and Bluetooth connectivity. The latter is primarily for the remote control, but it also comes in handy if you just want to blast music out of the pair of 7W Dynaudio speakers.

For streaming and mirroring, iPhones can simply use AirPlay, but Androids will have to use a third-party app called EShare. It's unclear whether JMGO can add Google Cast support in the future, so for now, I have to plug in a Chromecast dongle.

Removing the shiny O1 from its box, I was surprised by how light it felt — 2.3 kilograms (about five pounds) is insubstantial compared to most projectors. I was able to set up the kit within minutes by hooking it up to my WiFi network, followed by pairing the Bluetooth remote control.

When I turned on the O1, I was greeted by the Android-based Luna OS' "message board" homescreen. This is simply a big clock widget hovering above a music widget, a weather widget and a voice assistant widget (this will be Amazon Alexa in the global firmware). These modules stand in front of a black backdrop, and the dark interface blends nicely into my wall, especially when the room is almost pitch black.

From the homescreen, you can toggle the music player which offers various visualizers to go with the tune and, if available, lyrics. Scrolling left walks you through a digital art gallery, which basically turns the wall into an artistic dynamic wallpaper. I could see these coming in handy for your next house party (if you can even remember what those are like).

In terms of picture quality, you can probably guess from the specs that you'll have to lower your expectations somewhat: This isn't a $3,000 projector. But on the other hand, the projection is pretty good for a $699 device, let alone an ultra-short-throw one.

If I may nitpick for a moment, the colors are a little over-saturated, which is likely the result of a limited dynamic range. But I found the picture absolutely fine for my casual video watching. I also struggled to get auto keystone correction to work at the top right corner of the projection, as you can see in the image above. This tends to happen if my projection is above 55 inches wide on that wall, and it's possible that the surface isn't smooth enough for this feature to function properly. It's easy to fix this manually, anyway. Maybe someday I'll buy myself a dedicated projection screen.

The biggest surprise was the audio performance. The Dynaudio stereo speakers produced clear sound with adequate bass, so much that I could see myself using the O1 for background music when my friends are visiting — the music visualizer on the wall would be something to talk about, at least.

Even though I didn't get to test JMGO's larger and heavier O1 Pro (pictured in the right half of the above image), it's worth pointing out the differences. Supposedly with help from the high-end camera brand Leica, this machine offers a better throw ratio of 0.21:1, higher brightness at 1,250 ANSI lumens, lower picture distortion rate (less than 0.5 percent instead of 1 percent) and higher contrast ratio at 6,000:1. Apparently, Leica also had a say in contrast, color reproduction, sharpness, noise reduction and more, so it'll be interesting to compare the picture quality between this and the O1, especially given the cheaper model's over-saturated color.

The O1 Pro also comes with more powerful 10W Dynaudio speakers in a larger sound cavity, which should produce more cinematic audio. You'll also find two additional "AI cameras" on this machine: the front camera is for gesture control and brightness adjustment, whereas the rear camera is for auto frame fitting when using the device with an ambient-light-rejecting screen.

The one thing I'm baffled by here is JMGO's decision to launch two relatively affordable ultra-short-throw projectors with "just" a $160 price difference, which is probably why most backers as of writing have opted for the O1 Pro instead. For me, having already seen what the O1 is capable of, if you're set on buying one of these projectors then the O1 Pro is most likely a no-brainer at this price. That is, unless you have tight requirements on the size of the machine, or maybe just can't wait an extra month for the Pro to launch. (The O1 is slated to ship in August, while the O1 Pro won't arrive until September.) Either way, I'm impressed by what JMGO has achieved in such a low-cost product. Hopefully it inspires other brands to play catch-up.