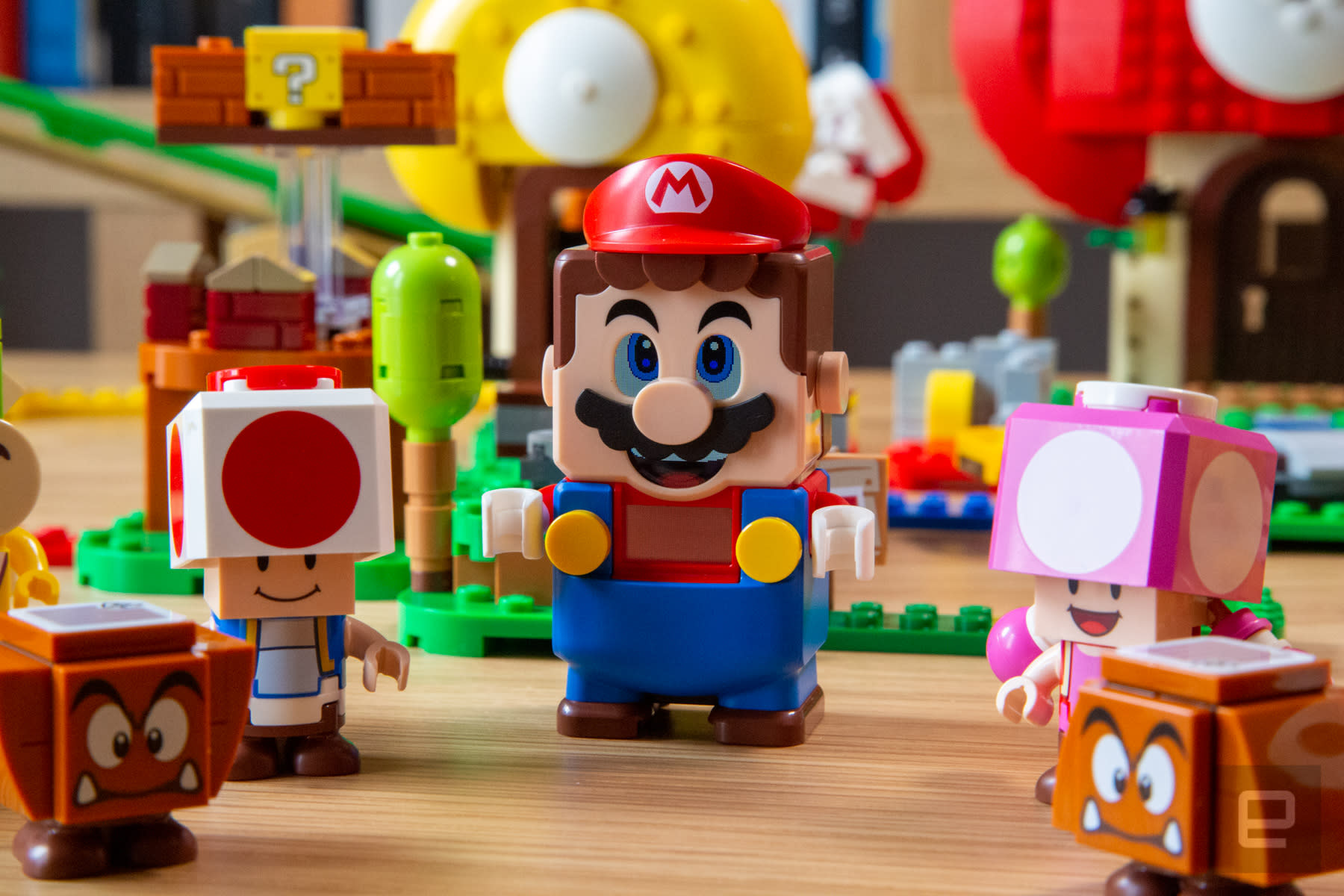 For the first time, I feel compelled to 'play' with my Lego creations.

Lego is no stranger to video game collaborations. The legendary brick maker has already developed sets based on Mojang's Minecraft phenomenon and Blizzard’s popular Overwatch shooter, for instance. The company’s upcoming Mario range is a little different, though. The sets replicate not only the visual splendor of the Mushroom Kingdom, but what it’s like to play through levels with a controller or handheld console.

Or at least, that’s the idea.

The most important part of Lego’s new product line is, unsurprisingly, Mario himself. The special minifigure is roughly seven centimeters tall — almost twice the size of a regular Lego character — and has tiny LCD screens where his eyes, mouth and chest should be. These components, combined with a loudspeaker positioned on the back of his head, allow Mario to blink, grin and deliver fully voiced lines like “yahoo,” “Lego Mario time” and “I’m-a-tired.”

The real magic lies within, though. Mario has an accelerometer, gyroscope and a color sensor that, with the help of two downward-facing lights, can identify terrain and special Action Bricks.

Place the character on a green square, for instance, and a grass-themed icon will appear on his chest. Blue and red bricks, meanwhile, represent water and lava, respectively. Action Bricks are special symbols that allow Mario to 'see' power-ups and enemies and select pieces of the environment, such as floating clouds and sliding platforms. Place the figure on the appropriate tile — it looks a bit like a QR code — and he reacts with recognizable sound effects and animations.

Mario collects coins as he moves through the course (you can indicate that he's walking by tapping his shoes on the ground) and interacts with Action Bricks.

Of course, you need to build every level first. The aptly named Starter Course kit comes with a Mario figure, Goomba, Bowser Jr and Question Block, as well as some basic environmental pieces. Other iconic characters, including Yoshi, Toad and Bowser, are in different expansion packs. Lego will also sel optional suits and booster packs that contain randomized enemies, such as Bloopers, Bob-ombs and Buzzy Beetles.

Sporadic videos explain how Mario is supposed to interact with each enemy or environmental hurdle.

Following Lego tradition, each set comes with a paper booklet. The ‘instructions’ merely point you to the Lego Super Mario companion app, though. The free software has 3D models you can rotate and zoom into to ensure you’re lining everything up correctly. If you’ve built one of Nintendo's cardboard Labo kits before, you'll feel right at home. Sporadic videos explain how Mario is supposed to interact with each enemy or environmental hurdle. A tutorial for the Piranha Plant Power Slide set, for instance, shows that you need to hop on a Koopa Troopa twice to “defeat” it and earn a coin.

Once you’ve built a course, the Lego team hopes you’ll play through it. Place Mario on the Start Pipe and a 60-second timer will appear on his abdomen. You also hear the classic Mario theme tune through the minifigure's speaker, emphasizing a new run has begun. Your goal is to get through the level and collect as many coins as possible before reaching the iconic flag pole at the end.

It's a familiar setup, though the 'play' experience is dramatically different to Nintendo's beloved platformers. In the real world, Mario’s movement is effectively limitless. That’s because it’s on you — the human player — to pick up and move his chunky body around the level. I’m sure some will try to replicate Mario’s run and triple-jump perfectly. Others, though, will want to wave their hand around like a maniac, leaping over trees, lava pits and triple-Goomba-stacks in a single bound. Beyond the protests of a potentially miffed sibling, there’s nothing to stop you from giving Mario the strength, speed and flight of Superman.

Nintendo’s classic side scrollers, meanwhile, are more restrictive. Mario’s pace and jumping power are carefully tuned to make each level a challenge to overcome. The joy of each Mario game is learning and mastering the control scheme so the plumber moves through each level like a ballerina.

Lego's designers did consider trying to replicate Nintendo's ‘pixel-perfect’ platforming. It was difficult to communicate what the player could and should do in any given moment, though. A video game-inspired ruleset also suggested there was a ‘right’ and ‘wrong’ way to play with the sets. “If you make hard boundaries for players, or hard criteria, then a lot of people are just going to fail,” Jonathan Bennink, the lead designer on Lego Super Mario said. “And it's us telling you exactly what to do.”

That’s why it’s impossible to die in Lego Super Mario. The only way to ‘fail,’ in fact, is to run out of time. Takashi Tezuka, a veteran game designer who directed Super Mario World, was adamant the brick-based character shouldn’t have any health or lives. “He said that Lego Mario needs to be a toy that makes kids happy,” Bennink explained. “If Mario dies, he's not happy, and kids aren't going to be happy.”

Instead, the two companies adopted a ‘right and more right’ philosophy. Mario will gain a coin multiplier, for instance, if you keep his body balanced inside a minecart on the Piranha Plant Power Slide. Hitting the toothy enemies on either side will cancel the multiplier, but you won’t lose any of your previously collected coins. If you want to ignore the slide entirely and accrue coins another way on the course, that’s fine too. “It comes from a place of rewarding right behavior and not necessarily punishing the wrong one,” Bennink said.

Mario's final score will appear on his chest once you've landed on the flag pole Action Brick, giving you a chance to jot it down or, more likely, wave it triumphantly in your best friend's face.

If you’ve connected Mario to the app over Bluetooth, you'll also see a screen that shows your total and everything that you did to accrue coins. It’s a useful tool if you want to know how someone beat your previously held record or triple-check that all of your Action Brick stomps registered correctly. If you're hurrying through a long and complicated course, you might not have time to check whether you landed squarely on a Goomba's head or waited long enough to accumulate coins on a floating cloud.

Once you grow tired of Lego's official designs, you're free to break them down and create something new. Every set is modular — large, squarish base pieces connect with long and thin bricks — so it's easy to move the environmental set pieces around and create something that feels fresh. If you're feeling extra creative, it's also possible to build a course from scratch and mix in bricks that you've accumulated from other Lego product lines. All that matters, really, is that you have a Start Pipe and Flag Pole. There's nothing to stop you from placing Bowser's Castle on a shoebox, for instance, or using a generic spaceship set to create a Galaxy-themed course.

It's easy to move the environmental set pieces around and create something that feels fresh.

To get you started, Lego has made an inspiration-focused star section in the app. It includes a Weekly Challenge and the option to share your own creation using the camera on your smartphone or tablet. You can also view other people’s submissions and, provided they’re well photographed, attempt to replicate them with your own kits. (Or build something close to them, if the original creator has used a bunch of bricks you don't have.)

Photographed creations will also appear in a special gallery section of the app. If you've just completed a run, you can also add a lower third that shows your score and some of the Action Bricks you interacted with. The Lego team included this section so you can break down your creations and easily recreate them at a later date, whether that's for display purposes or so a friend can try to beat your high score.

Lego Super Mario is the first time I've ever felt compelled to really 'play' with the company's colorful bricks. As a child, I would build something, show it off and then immediately break it down and create something new. I never really played with them like a Matchbox car or action figure. To me, Lego was a brilliant construction kit and nothing more.

The new Mario sets are different, though. The special minifigure means I have an incentive to sit down and play with the course I’ve just built. The coin collect-a-thon doesn’t compare with Nintendo’s video games — at least, not if you’re interested in precision platforming — but it’s compelling enough and encourages you to set up miniature tournaments with friends and family.

The underlying ‘game’ also serves as a prompt for your own creations. Before, my only concern was whether something looked cool or not. With Lego Super Mario, I’m also considering what my courses will be like to play. Is the build too hard or easy? Does it have enough variety and make good use of all the Action Bricks I own? These questions test a different and embarrassingly underutilized part of my adult brain.

The obvious parallel is Super Mario Maker. Both are built to make you feel like an accomplished video game designer. But in reality, the two experiences are wildly different. In Super Mario Maker, for instance, you’re constantly questioning whether a ledge is too high or guarded by an unfair number of Koopa Paratroopas. It’s also restricted to a 2D plane, whereas Lego Mario courses can sprawl in any direction. Still, the two evoke the same feeling of creativity and nostalgic delight.

Lego sets have always been expensive, and the new Mario-themed product line is no different. The Starter Course alone will cost $59.99 at launch later this summer, which is the same price as Super Mario Maker 2 on the Switch. Any Lego fan will tell you, however, that the company’s colorful bricks are a great investment. They’re ridiculously durable (I swear they’re stronger than Adamantium) and, through custom builds, have near-infinite replayability.

I’m excited to see what Mario-themed sets come next, and if the app can nurture a community similar to the one that’s blossomed around Super Mario Maker. And maybe, just maybe, we can get a Lego Super Luigi next. I would kill for a Luigi’s Mansion-inspired figure that can find hidden ghosts with a flashlight.