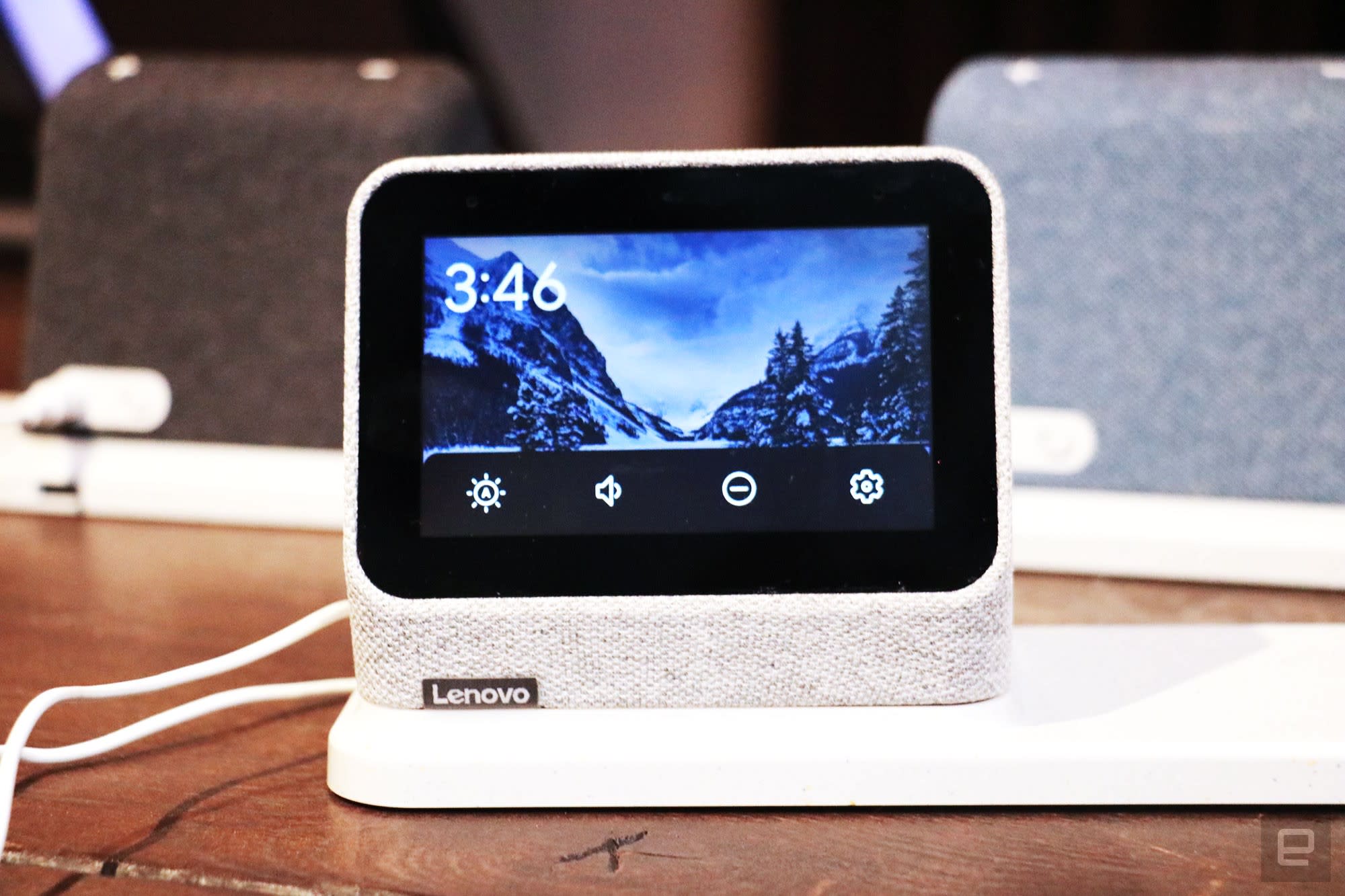 That doubles as a nightlight.

Lenovo is back with more smart clocks. It’s one of a handful of third-party companies that make Google Assistant-powered displays, and we were impressed by the original Lenovo Smart Clock’s simplicity and low price. Lenovo then followed it up with the Smart Clock Essential, which was basically a smaller alarm clock with speakers and a mic for you to talk to Google’s Assistant. This time around, the company is launching the Smart Clock 2, and it offers some improvements over its predecessor for $10 more. Plus, it comes with a wireless charging pad that lets you juice up your compatible devices and doubles as a nightlight.

Like its predecessor, the Smart Clock 2 is a four-inch display encased in a cute, sort of pyramid-shaped frame. It looks nearly identical to the last model, except it has a taller base below the screen now. This is likely because Lenovo moved the device’s speakers to the front, so they now fire outwards, which is nice for people who place these clocks in front of walls or on shelves.

The fabric covering the Smart Clock 2 is also pretty much the same as before, but there are two new color options to choose from: black and blue. They’re both subtle hues and are inoffensive enough to blend into most living spaces or bedrooms.

The most obvious hardware difference on the new Smart Clock is the addition of the wireless charging dock. It’s not quite clear whether this is included everywhere yet — a press release says this is an optional accessory, but Lenovo told Engadget that the $90 price includes the pad. It’s possible those in the US will only be able to purchase the bundle rather than get the clock on its own for cheaper.

Whether the mat comes with or you choose to buy it, you’ll be getting a wireless charging surface for your Qi-compatible devices. There’s also a USB-A socket on the back edge for wired charging, since there is no longer one on the screen’s rear. The left half of this dock is reserved for the clock, which attaches and is powered via pogo pins. A little tube encircles the device’s base and it lights up when you lift the clock slightly.

Lenovo said a software update is coming that will also let you trigger the nightlight by swiping down on the screen. Both methods are meant to let you activate the bulb without having to say anything to the Assistant, so you can avoid waking light sleepers when you need illumination for your midnight pee.

The software control wasn’t available when I checked the Smart Clock 2 out at a recent demo in New York, but the night light did turn on when I popped the device off its charger. It emitted a soft glow that wasn’t at all glaring in our conference room, but I can imagine it’d be plenty bright in a dark bedroom.

The rest of the Smart Clock 2’s features are pretty much the same as the original — swipe on the screen to see and set alarms, get the weather forecast, control your smart home devices and more. You can pick a new dark theme to make the interface easier on your corneas at night, and the Assistant is available for your spoken requests. There’s also a microphone mute switch if you’d rather the device not hear you, and as with earlier models, there’s no camera here.

I’ve been a fan of Lenovo’s smart clocks and am happy to see the line get some love, even if it’s in the form of a minor update. While I don’t use wireless charging much and would rather get the clock on its own, I could see myself using it more for things like earbuds and smartwatches. At $90, the Smart Clock 2 is less tempting than the original but since it’ll only be available in September, there’s time to wait till we get a review unit in to tell if the updates are worth the price hike.