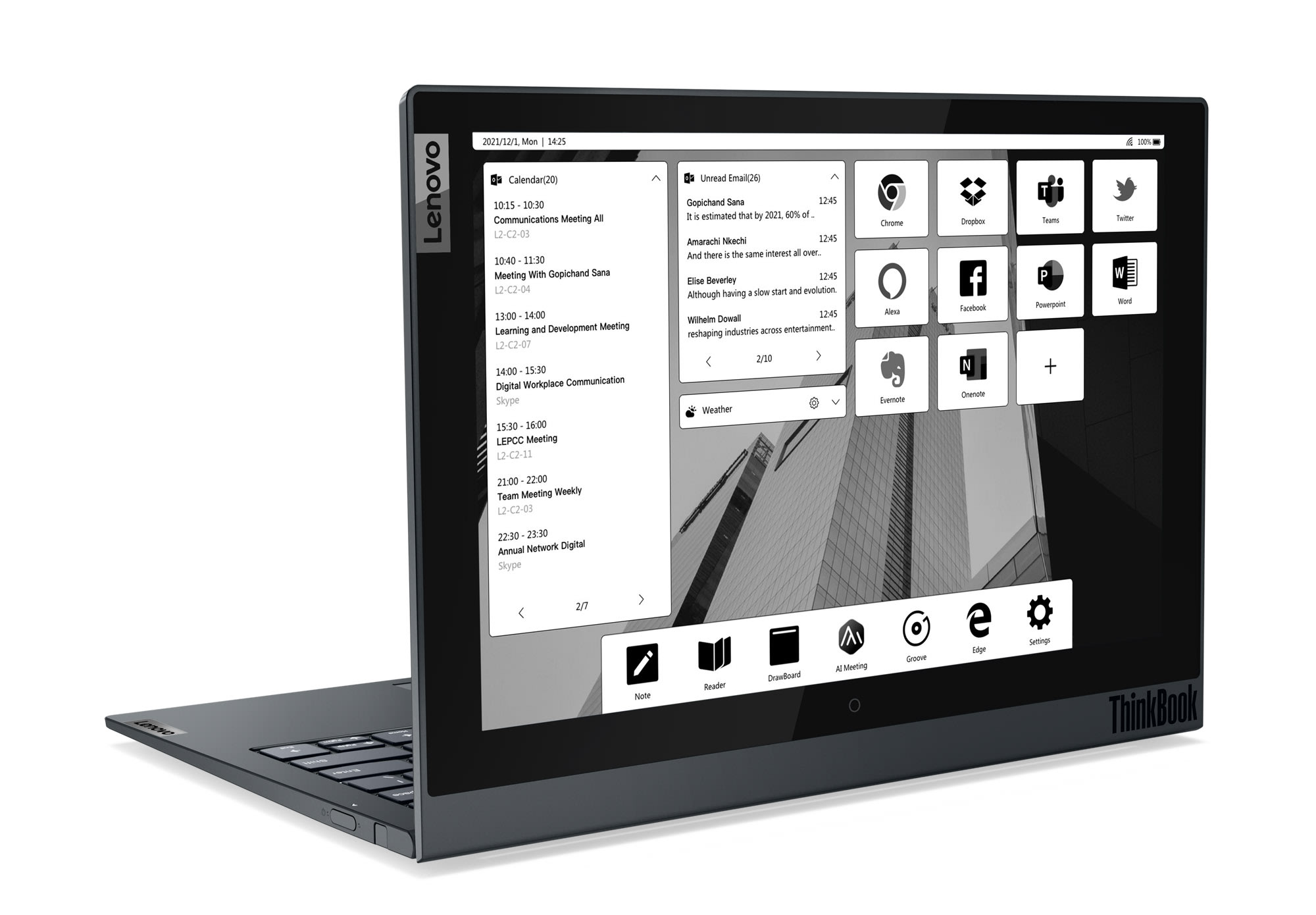 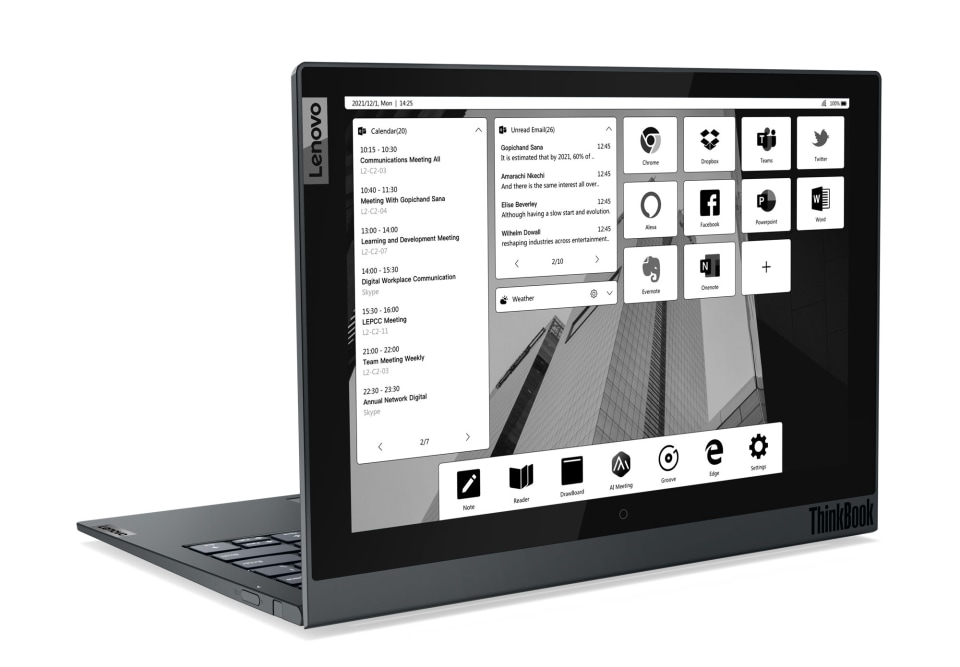 Pop quiz, hotshot: when's the last time you seriously thought about buying a laptop with a standard screen on one side and an E Ink display on the other? If you answered "never," well, fine -- that's probably true of most people. But that didn't stop Lenovo from taking a hard look at last year's ThinkBook Plus and cooking up a $1,549 Gen 2 i model for 2021.

The big draw here is that the second display is, well, bigger: last year's ThinkBook Plus packed a 10.8-inch E Ink screen while this year's model uses a more spacious 12-inch panel that matches the 13.3-inch main screen's 2560x1600 resolution.

The interface seems to have gotten a pretty significant revamp, too. There's a more pronounced focus on managing your calendar and incoming messages through dedicated widgets, and even better, the Gen 2 now lets you launch certain productivity apps -- seemingly including Microsoft's suite of Office software -- without having to open the ThinkBook. Curiously, there's no word on Amazon partnerships this year, so while the Gen 2 appears to include an Alexa shortcut, it's unclear if you can read Kindle books on the external display again. (Since this is a strictly business-oriented machine, we sort of doubt it, but we'll update this story if we hear differently.) 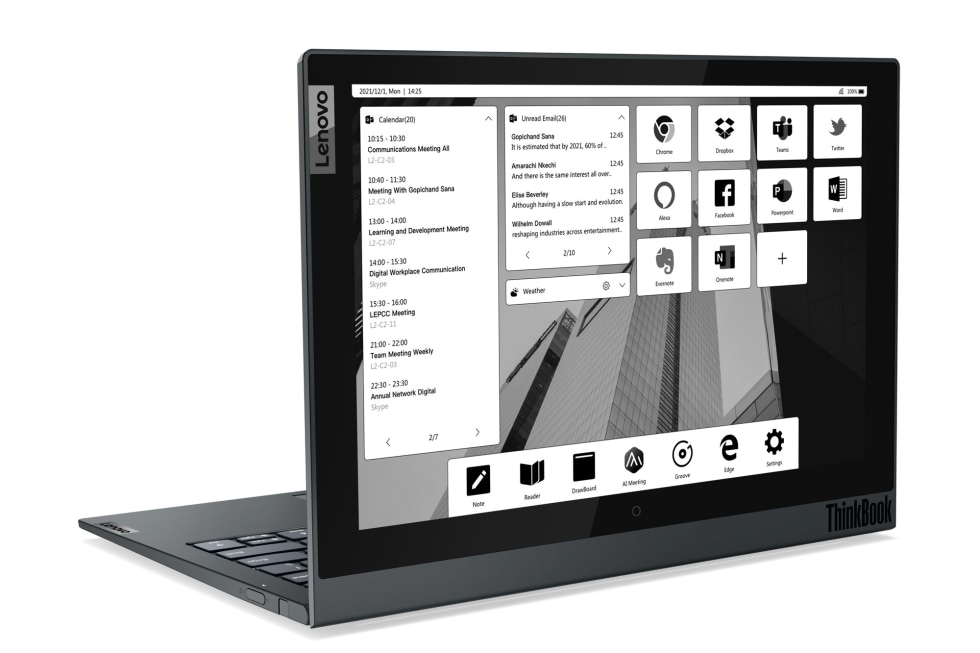 And then there's the stylus: you'll be able to doodle or jot notes on this second screen just like last time, but there are a few notable changes to remember. For one, the stylus fits inside the notebook this time, rather than magnetically -- and somewhat awkwardly -- snap to the side of the screen. More importantly, the stylus can also be configured to launch specific apps once it's removed from its housing, a move that makes it feel not unlike one of Samsung's trademark S Pens.

Meanwhile, the rest of the machine is fairly standard road-warrior stuff. You can kit it out with up to an 11th-gen Intel Core i7 chipset and up to 1TB of storage, while the 16GB of RAM, integrated UHD graphics, WiFi 6, 2W stereo Harman Kardon speakers, and two Thunderbolt 4-compatible USB-C ports are common across all configurations. Lenovo says you can expect up to 15 hours of use from the ThinkBook Plus's 53Whr battery, though you can squeeze considerably more life out of this notebook if you only use that E Ink screen -- think 24 hours or so.

The original ThinkBook Plus was charming in its strangeness, but some of Lenovo's software and feature choices felt incongruous with the notebook's focus on business. This time, though, the company didn't just flesh out that second screen's functionality -- it focused it. Sure, that means it's a little less fun than before, but hey: these changes also make the Gen 2 i an easier sell for IT departments, and a great conversation starter for the professionals who ultimately wind up with these things.

In this article: e ink, laptop, ces, ces2021, personal computing, lenovo, thinkbook plus gen 2 i, thinkbook plus gen 2, thinkbook plus, news, gear
All products recommended by Engadget are selected by our editorial team, independent of our parent company. Some of our stories include affiliate links. If you buy something through one of these links, we may earn an affiliate commission.