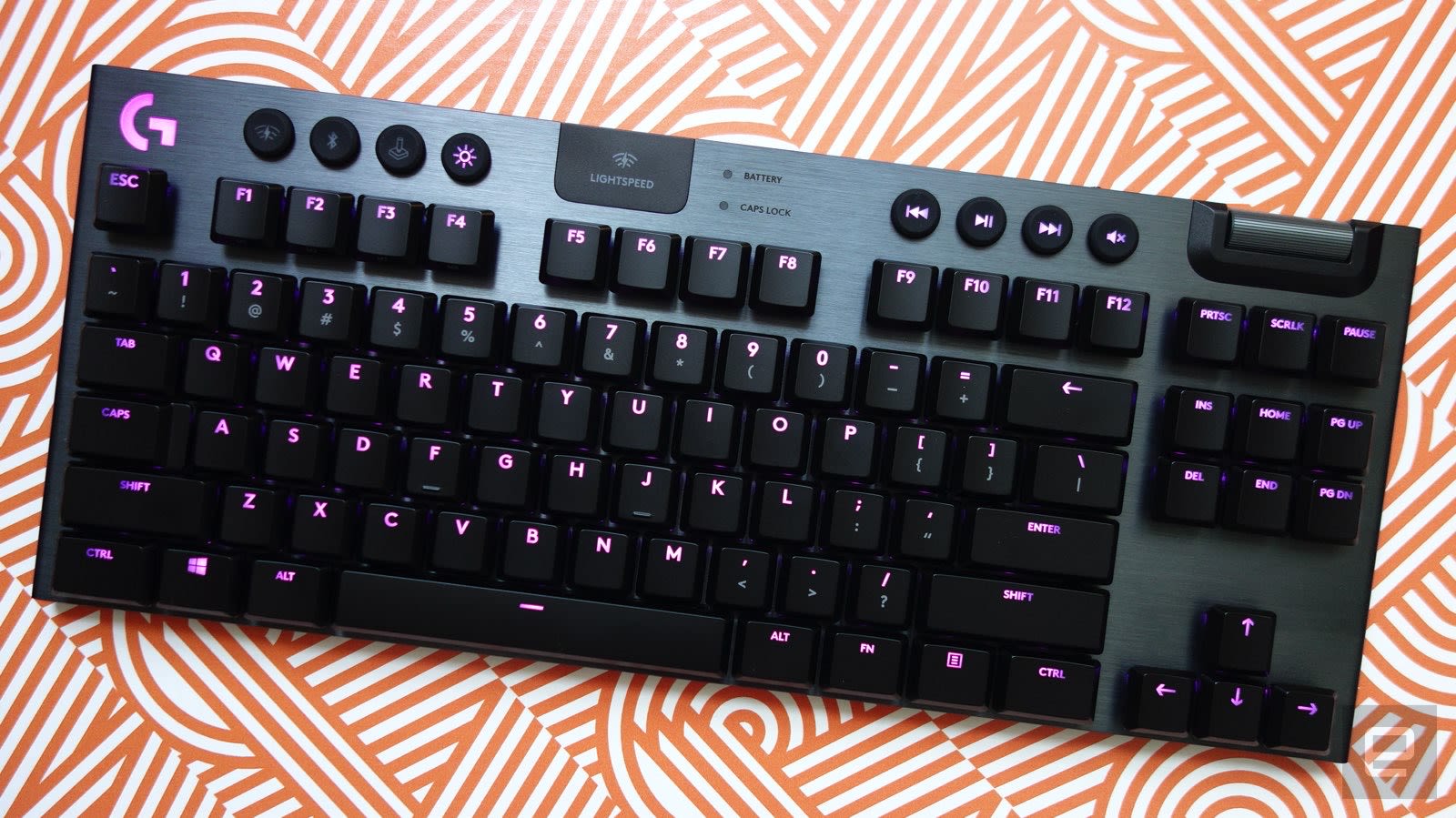 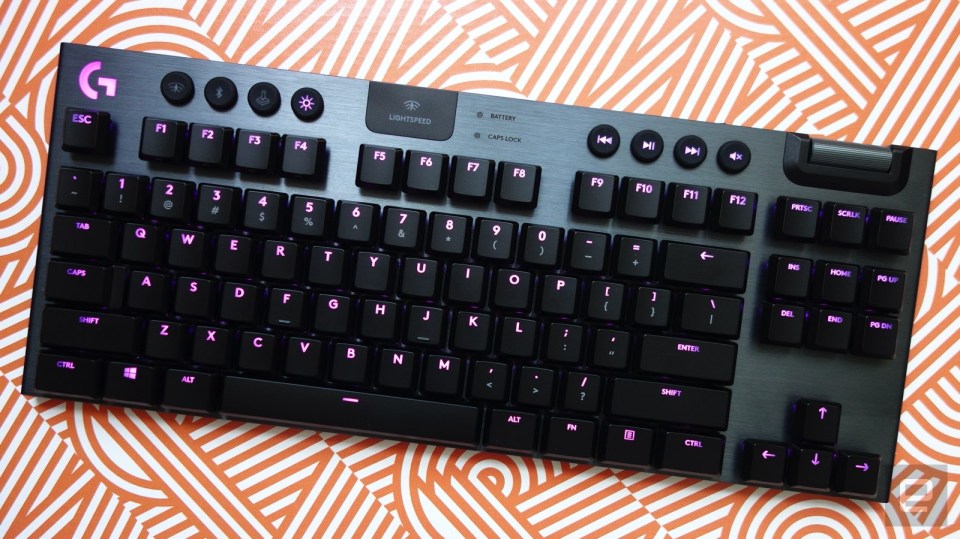 I’ve been spending a lot of time working in soft chairs. Oh, I have a perfectly good desk with a perfectly good monitor and keyboard, but sometimes I just wanna get comfortable in my living room … or in bed. The problem is, this forces me to use the keyboard on my three-year-old MacBook Pro. Yes, the one with the infamous butterfly switches. It feels horrible, and my N key has a tendency to not respond.

That makes Logitech’s announcement of the G915 TKL so welcome at this time. It’s a smaller version of last year’s wireless G915 keyboard, which packed mechanical keys into a thin, study deck that could easily be used almost anywhere with any device — laptops, tablets and even phones. This year’s update is a tenkeyless version, which means it forgoes the number pad for an even slimmer profile. Now it’s more lap friendly, perfect when so many of us have moved our work and even gaming into a more informal setting.

At the Engadget office, my daily driver since September has been the MX Keys. That’s marketed more toward office work, meant to accompany the excellent MX Master mouse. I liked it a lot, though at the time I noted its lower profile took some getting used to.

The G915 TKL (and presumably the original G915, which I have not tried) feels like the gamer’s version of the MX Keys. It’s thin and light, and it offers the same versatility when syncing with your devices: I had no problems getting it set up with my MacBook or even my Pixel 3 via Bluetooth, though gamers will likely prefer to use the included Lightspeed dongle for wireless connectivity.

One annoyance I encountered here is that the dongle is a standard-size USB plug and not USB-C; this makes sense considering most gamers are playing on desktops, consoles and gaming laptops. But it’s a pain if you wanted to use it with anything in the growing “slim and light” device category that’s fully embraced USB-C (which is every single machine I use now). I want to eliminate as many wires from my setup as possible, but now I have an awkward dongle dangling off the side of my machine.

For use on a desk, the G915 TKL has three height adjustments and rubber feet to keep it from sliding around. Oh, and because this is a gaming keyboard, it has the requisite customizable LED lighting under each key. Logitech claims the system supports 16.8 million colors, which you’ll get a taste of as the keyboard cycles through the rainbow after you plug it in. The keyboard is supported by Logitech’s G Hub software, which is easier to use than most customization suites. There’s also a physical button to quickly adjust the brightness of the lighting and eventually shut it off.

The G915’s LED lighting is not as distracting and flashy as other setups I’ve tried, so I’m perfectly happy to leave it on as I work. But there’s one good reason to turn it off: With the LED lighting on, the G915 TKL is rated for 40 hours of battery life, meaning you’ll need to charge it roughly once per work week, or after a weekend-long grinding session in your favorite MMORPG. Switch that lighting off, however, and the claimed battery life jumps to more than 1,100 hours. Still, I wouldn’t necessarily advise that; the keys become hard to see when completely dark. But in a pinch you’ll be thankful for the option.

The battery life on the MX Keys is much better, listed at 10 days with the lighting on, which seems about right based on my experience using it at the office. But the typing experience on the G915 TKL is way better. And mind you, the key feel on the MX Keys was excellent. What the G915 offers is a crisper, more springy experience aimed at gamers who value sensitivity and physical feedback in their keyboards. The G915 uses Logitech’s own GL switch design, developed with the help of Kailh — a company not as famous as industry leader Cherry but still a well-known brand to keyboard geeks. The model I was sent has a linear key setup, which is the quietest of the bunch but still generates a lot of noise, thanks to the impact of the plastic keycaps hitting the metal deck. The keyboard also comes in tactile and clicky models as well.

I’ve been switching back and forth between the G915 TKL and my MacBook as I write this review, and it’s the difference between heaven and hell. Compared with my trusty Corsair K95, it puts up a good fight but doesn’t come close to matching the sensitivity and solidness of that wired deck. The closest competitor to the G915’s feel is the Roccat Vulcan, which also offers a low-profile typing experience similar to that of a laptop keyboard. The G915 probably bests the Vulcan in how it feels more weighty despite being thinner. Way thinner.

The G915 TKL is a keyboard I’d be happy to have at my workstation or gaming rig, but personally, when I need to get serious work done I like having a number pad at my fingertips: The usefulness outweighs the small amount of desk real estate the extra keys would take up. But if I wanted to step back from my monitor or attach a keyboard to my PS4 or TV and just relax on my couch, the G915 TKL is enormously appealing. The excellent battery life ensures that I won’t have to worry about charging it too often, and the solid build means that it can survive a tumble or two off my couch.

The biggest caveat is price: The G915 TKL costs $230, steep even for a gaming keyboard, given that you can buy a solid mechanical deck for less than $150. Meanwhile, the non-gaming MX Keys costs only $100 if you just needed something solid and portable for work. But if you often find yourself switching between use cases (and rooms), the G915 TKL might be worth it when it comes out in June.

In this article: keyboard, keyboards, wireless, G915, logitech, G915 TKL, tenkeyless, feature, gear, gaming
All products recommended by Engadget are selected by our editorial team, independent of our parent company. Some of our stories include affiliate links. If you buy something through one of these links, we may earn an affiliate commission.