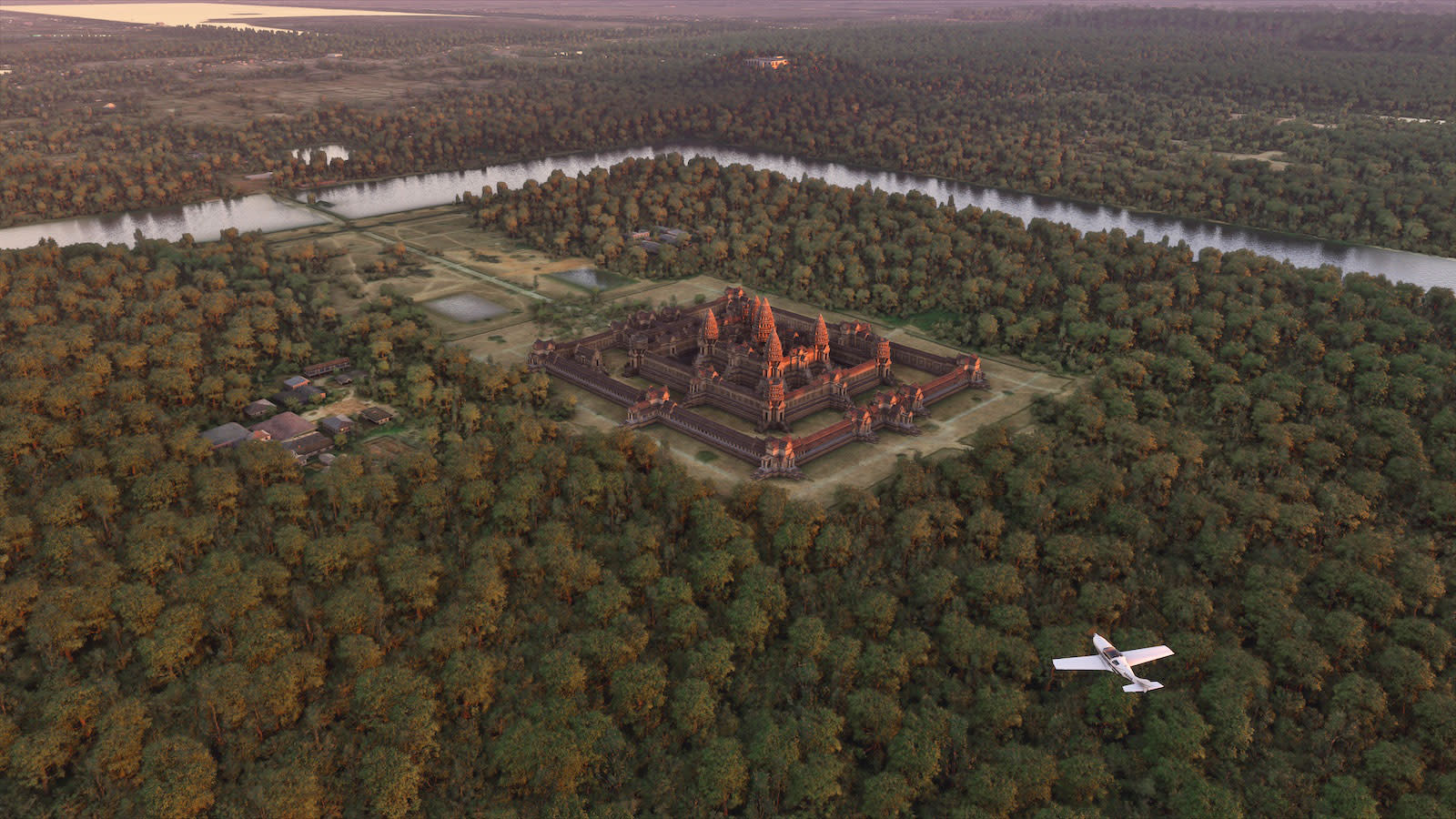 Asobo didn't predict the quarantine, but it made the perfect game for it.

That sound has been playing on a quiet loop at the base of my brain for the past few days, propping up all of my other thoughts with soothing white noise. It’s the background tone of Microsoft Flight Simulator, which I’ve been playing in preview ahead of its full launch on August 18th. The sound is subtle, buzzy and distinctly mechanical, and it reminds me of traveling. Mostly it evokes those calm moments on an airplane, in between the stress of boarding and deplaning, when all you can do is sit as your body is flung over the planet and on to new adventures. With global travel restrictions in place for yet another day, I find myself craving that small, strange bubble of peace. I miss that sound.

When they began building Microsoft Flight Simulator some years ago, developers at Asobo Studio had no idea how prescient the project was (even if Bill Gates kinda did). They didn’t calculate the exact date of a global pandemic or factor in the pent-up energy of a million canceled travel plans, but they ended up building an ideal playground for the self-quarantine era. Flight Simulator is impressive, attractive and deeply soothing, especially right now.

Even without quarantine-colored glasses, Flight Simulator is a spectacular feat. Using a combination of photogrammetry, procedural generation and hand-crafted code, developers have recreated the world in ridiculous detail, with particular attention paid to populous Western cities, famous landmarks and airports. There are 117 million lakes on Earth and all of them are in Flight Simulator, in the correct spots and with realistic reflections, ripples and even tide pools. Players can buzz the Eiffel Tower, Taj Mahal, or Grand Canyon on a whim, or attempt to land in their own literal backyard. Time and weather are malleable.

Each plane -- and there are 30 total, from single-engine crafts to passenger jets -- has 1,000 fully simulated points that respond to a variety of factors, including the atmosphere, weather and player input.

Flight Simulator is dense, with hours of practice exercises and challenges. The main menu features Flight Training, Activities, News, Live Events and the World Map. Training is where I learned to use a controller instead of the keyboard of my Alienware m15 R3, which doesn’t have a number pad. The default Flight Simulator controls require a separate number pad or a significant amount of key reconfiguration, and it’s impossible to gently control a plane’s yaw, pitch and roll without pressure-sensitive keys. But the second I connected a wireless Xbox gamepad, the entire training scenario made sense. Analog sticks are crucial to a peaceful Flight Simulator experience.

Input methods aside, the best mode in Flight Simulator is the World Map.

The World Map is the sandbox portion of Flight Simulator. Pick literally any spot on Earth, adjust the weather, air traffic and clock, and start flying in the plane of your choosing. Or, use the “live” settings to soar around the actual, real-world conditions of any region, at any time. The globe is pockmarked with thousands of white-and-blue dots showing off airports and featured locations, but you’re able to take off from any area, marked or otherwise.

This is the heart of Flight Simulator. A rush of giddy adrenaline hits my stomach every time a new region loads, and the buzz of the engine first hits my ears. Each plane has its own sound, and each location its own mood. From the air, the planet feels equally vast and accessible. Keeping the aircraft aloft isn’t difficult once you get the hang of basic controls, but it requires constant attention and small adjustments. Quiet focus is the game. I put on a podcast, or some music, or a livestream, and I fly.

I fly over London, through Beijing and across the Sahara. I adjust the clock in each location to my favorite time of day -- just as the sun is setting, when the sky catches fire -- and my favorite weather conditions -- broken clouds to catch the fading light. I fly by Neuschwanstein Castle and let my plane glide over impossibly lush mountains, before heading to New York to watch the sun set behind Lady Liberty. I see the street lights flicker on in Berlin. I fly by the Russian White House and mentally flip off Putin. I watch night consume Antarctica.

Antarctica is quietly terrifying, even with a soft orange glow emanating off the horizon. It’s vast and untouched, hidden at the very bottom of the globe and usually blanketed in darkness, surrounded by deep, cold waters. The majority of the continent is flat and barren with no landmarks in sight, and flying over it in any aircraft, it feels impossibly, horrifyingly large. Flight Simulator visibly struggles with this setting more than others, with the unending terrain popping in as I fly. I don’t stick around for long.

Flight Simulator uses data from Bing Maps, Azure and a handful of partners to pipe in accurate buildings and environmental features, and mirror flight conditions in real-time. Largely because of this reliance on existing datasets, most of the starred sites on the Flight Simulator globe are concentrated in North America and Europe, with vast bare spots across Africa, Asia and South America. The in-game globe looks a lot like the coverage map for Google Street View, in fact. These naked areas haven’t been edited by hand or chosen as featured locations by developers, but they’re still explorable and realistically depicted by the simulator’s AI systems.

Flight Simulator isn’t going to stay stagnant. Asobo plans to support the game for the next 10 years at least, and has outlined a DLC schedule that drops free world updates every two to three months, expanding its hand-crafted code into untouched regions. Developers will also release “meaningful” content every month, and some bigger bits of paid content (like, helicopter-sized). And Flight Simulator is heading to VR platforms, starting with a debut on the HP Reverb G2 this fall.

Flight Simulator is a sensory feast, so once you get your hands on it, take your time. Do the training, adjust your input methods and discover the plane that works for you. They all fly differently, and you’ll easily find a few favorites, depending on the type of challenge you’re up for.

Playing Flight Simulator can feel a lot like meditation (Hummm), and that’s not a bad thing, especially today.