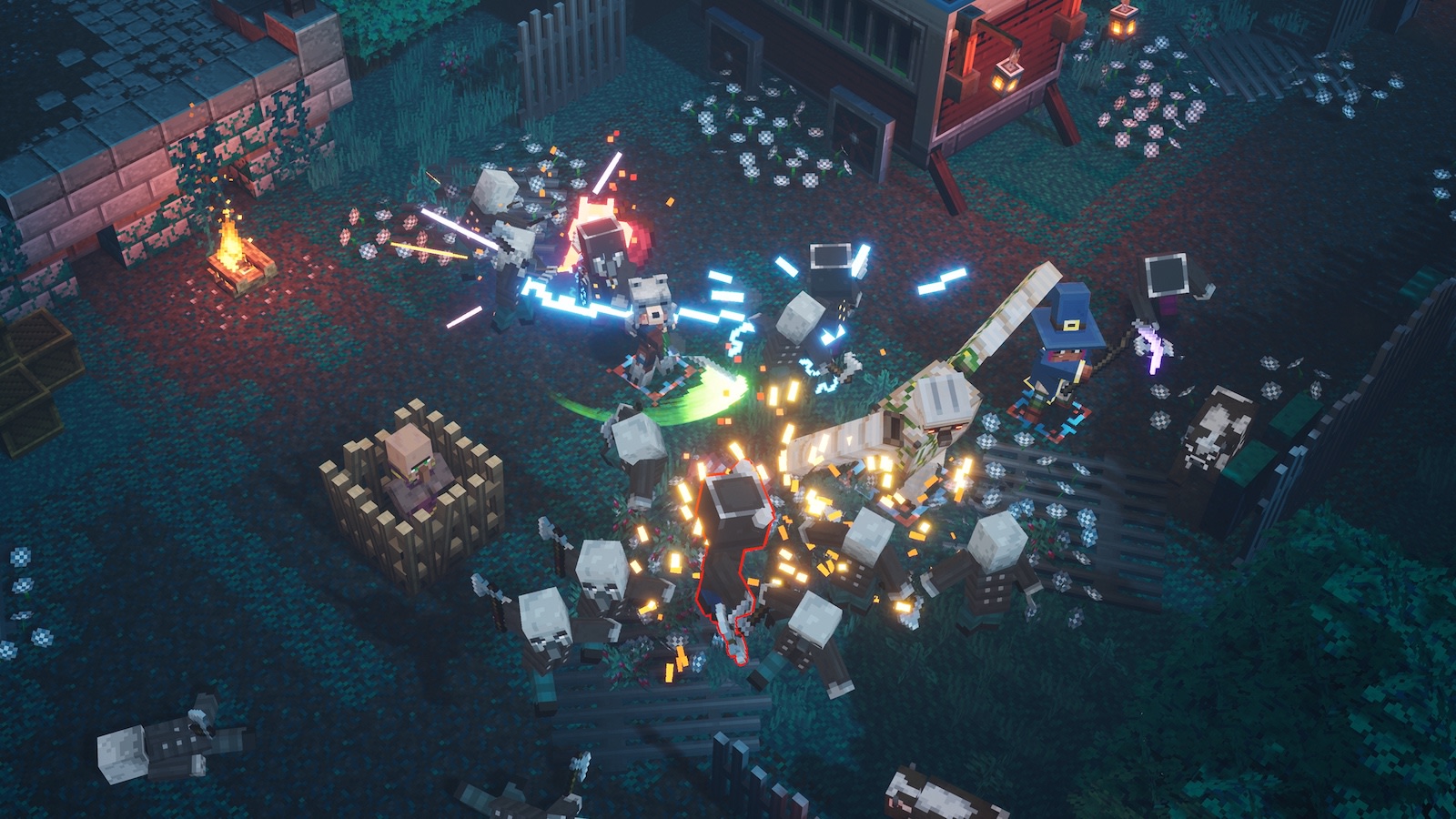 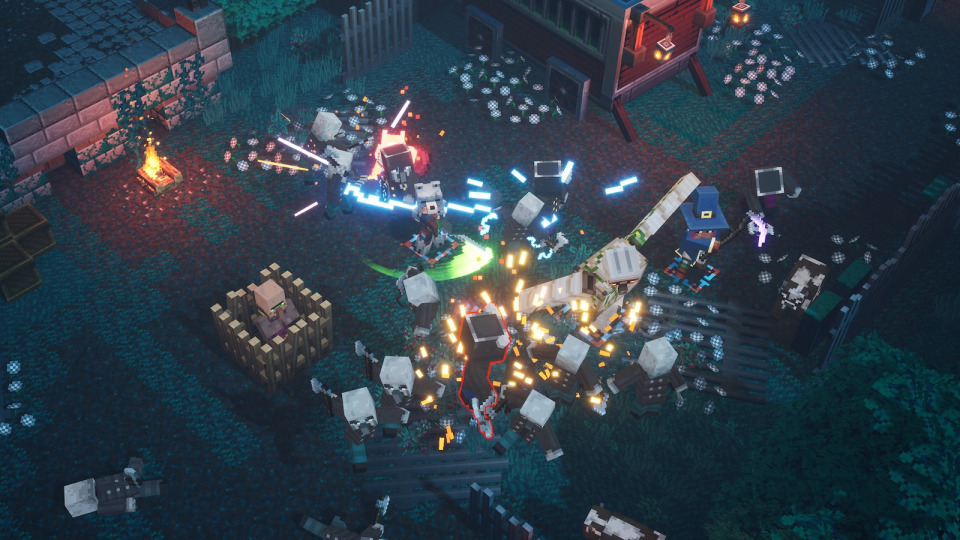 David Nisshagen squeals in delight as he directs his blocky character down a narrow, raised platform surrounded by violet flames. He’s just discovered a secret room in Minecraft Dungeons, and even though he’s the title’s executive producer, he doesn’t know what’s about to happen. The smile on his face is audible through our Discord call.

“Yes,” he replies, “I haven't seen it in this level. This is so cool. OK, so actually, as you see, we do have a couple of quite spooky and mysterious things here. I just collected something that will be very, very useful for me later in the game, or if I play the game again.”

Minecraft Dungeons is an adventure title inspired by classic dungeon crawlers like Diablo or The Binding of Isaac, but with the franchise’s patented kid-friendly flair. It features local and online multiplayer, randomly generated levels, and hordes of new and familiar enemies, including skeletons, creepers and spiders. The whole thing looks a lot like Minecraft, but it represents a new approach to game development for Mojang.

Microsoft purchased Mojang, the Swedish studio behind Minecraft, for $2.5 billion in 2014, and today it operates under the Xbox Game Studios umbrella. This doesn’t mean Minecraft Dungeons will be exclusive to Microsoft platforms -- the full game is scheduled to hit PlayStation 4, Switch, Xbox One and Windows on May 26th.

For more than a decade, Mojang has focused on Minecraft, the global phenomenon that’s introduced generations of kids and adults to sandbox-style video games. Minecraft Dungeons is the studio’s first real attempt at a new genre, and it’s been in production for at least four years.

The game’s storyline is simple and fittingly epic: An outcast villager -- known in-game as an illager -- found an orb of power and is using it to invade the overworld with armies of illagers at his command. Players travel through distinct regions battling the Arch-Illager’s minions, until finally facing off with the orb-holder himself.

Mojang introduced illagers to the base Minecraft game in 2016, though Nisshagen said these creatures actually started out in the Dungeons development room.

“We needed an enemy that was humanoid, and that had a ranged attack, and that had a fast-follow hunting mechanism,” he explained. After all, Nisshagen said, it was possible to just run from the zombies in Minecraft, rather than fighting them, and Dungeons developers wanted something that would encourage combat. “They do run after you with axes and hunt you down, and that was so appreciated by the Minecraft team that they implemented it in that game before we had released Dungeons.”

In fact, Dungeons began as an internal concept for the Nintendo 3DS.

“You can't fit Minecraft, such a complex game, on that,” Nisshagen said. That’s why developers went with a top-down perspective, rather than the original game’s first-person view, and they focused on building a world filled with opportunities for surprise and discovery.

“You can't take the whole Minecraft game,” he said. “You need to, not simplify it, but focus it down to its core elements. ...We doubled down on exploration and also the sense of adventure. The players should really feel like they're on an adventure. And then we take the creativity that Minecraft players use when they create all the awesome stuff in the game. We try to let them use that in our sort-of progression system, I guess is the word.”

Minecraft Dungeons doesn’t use a traditional, RPG-style progression system, and it doesn’t force players into specific roles. Instead of having rigid classes like “healer” or “tank” in the game, players can swap out their gear on the fly and combine items to infuse their weapons with whatever abilities the situation calls for.

“You can think of us transforming that sandbox thought into the progression system,” Nisshagen said. “There's absolutely no constraints. You can do pretty much whatever you want. There's really bad choices you can make, and there's certainly extremely good choices or very overpowered choices that you can make.”

There isn’t a wrong way to play Minecraft Dungeons. This is important to developers, especially because of the audience they’re targeting: kids and their parents. As a brand, Minecraft is geared toward younger players, while dungeon-crawler games are generally built for adults, with dense progression trees and inventories, and challenging combat arenas. Minecraft Dungeons is an attempt to appeal to both of these markets.

“We think that we'll see parents playing with children, or older and younger siblings playing together,” Nisshagen said. “There's quite a bit of depth in the system. Anyone that has a bit of gaming experience will probably find cool combinations of things to explore, from a game mechanics point of view. And then the other people, you can just go in and button-mash and have a good time as well.”

The game features drop-in multiplayer, both online and local, and each stage adapts according to the number of players. There’s no friendly fire, except for TNT boxes, which can hurt allies and familiars alike as they explode.

Cross-platform play won’t be available at launch, but it’s “absolutely” going to happen down the line, Nisshagen said.

“We're not a very big dev team,” he said (Mojang’s About page lists 71 employees). “Just being able to ship the same game on the PlayStation, Nintendo Switch, Xbox and Windows, that is quite the thing actually. And then having cross-play, we want to get it as soon as possible, but we want to make sure we have a good multiplayer experience on your own platform first.”

In this article: Minecraft, minecraft dungeons, mojang, Microsoft, feature, gaming
All products recommended by Engadget are selected by our editorial team, independent of our parent company. Some of our stories include affiliate links. If you buy something through one of these links, we may earn an affiliate commission.