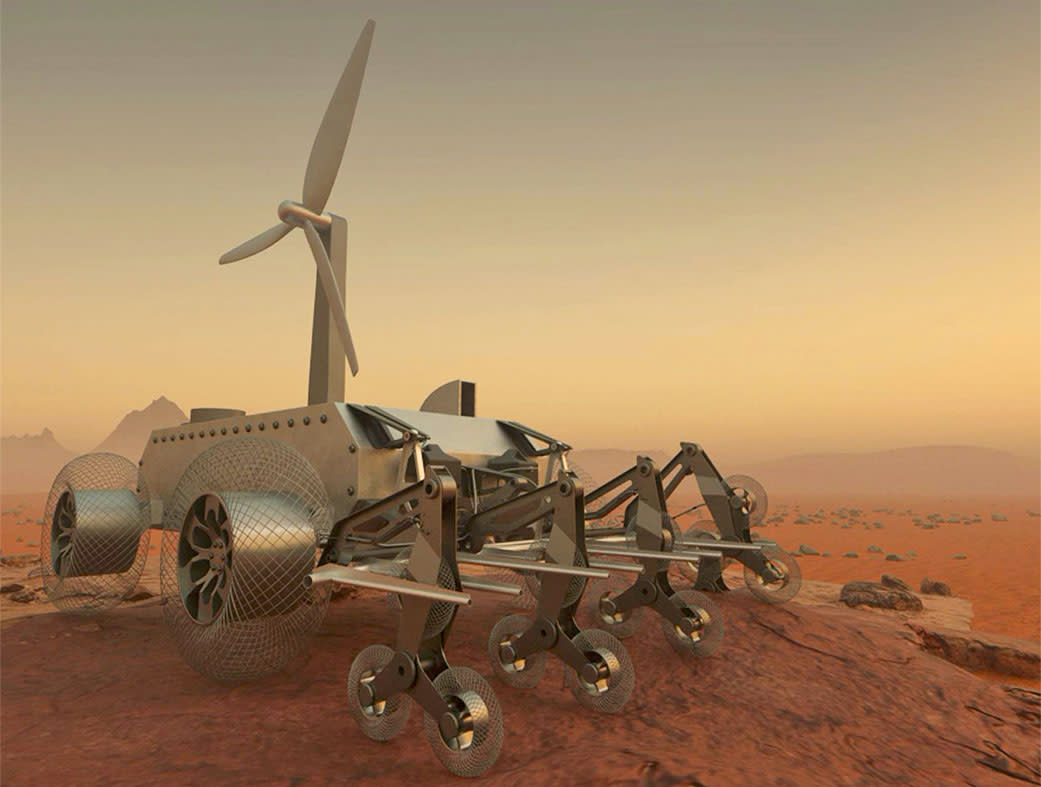 Designers help a rover navigate the crushing furnace of Venus

Venus is closer to Earth than Mars, but because it’s a hellhole that’s unforgiving to rovers, we still don’t know much about its surface. NASA and JPL recently launched a heroX design contest for mechanical sensors that would help its AREE (automaton rover for extreme environments) detect and avoid rough terrain. It recently picked the winner, and said it received such an “incredible” response from the community that it added two finalists and 10 honorable mention entries.

The $15,000 winner, “Venus Feelers,” uses triple-wheeled front “feelers” to help the rover avoid large rocks, steep slopes and holes. It does all that using pendulums, cams, rollers, levers, springs and flexible shafts, with no fragile hydraulics or electronic sensors in sight. It was designed by Egyptian architect and product designer Youseef Ghali, who summarized it as “back to basics from a new point of view.”

The $10,000 second prize went to “Skid n’ Bump” from Team Rovetronics out of California. It packs an “all-mechanical, mostly passive” system of cams, springs, gears and shafts that allow a metal probe to detect obstacles and relay the information back to the probe, according to the team. Meanwhile, third place and $5,000 went to Callum Heron for his “direction biased obstacle sensor” (DBOS). It uses a truss with a rock sensor out front, hole sensor legs in the back and a tilt sensor mounted on the rover body.

On top of the designs, NASA and heroX awarded $2,000 for best prototype to Kob Art from Latvia. That group created an impressive full-scale prototype “AMII sensor” that uses caterpillar tracks, a pin ramp, wire rope, springs and other basic materials to help their “rover” avoid rocks, holes and steep slopes. It also offered another $2,000 to Matthew Reynolds for “ECHOS” (evaluate cliffs holes objects & slopes) which uses “mechanical SONAR” to detect obstacles.

NASA awarded honorable mentions to other designs that solved the terrain using other unique and wild ideas. All told, 572 entries from 82 countries were received, with the best being considered for inclusion in AREE’s design as development for the rover continues.

The goal is to have a rover that can survive for months at 850-plus degree F temperatures and barometric pressures 92 times that on Earth. That’s an eternity, considering that the former Soviet Union’s Venera 13 — the longest surviving rover on Venus — only functioned for 127 minutes before dying.

All products recommended by Engadget are selected by our editorial team, independent of our parent company. Some of our stories include affiliate links. If you buy something through one of these links, we may earn an affiliate commission. All prices are correct at the time of publishing.
View All Comments
Designers help a rover navigate the crushing furnace of Venus
design
The Big Picture
space
rover
sensors
competition
thenewbigpicture
venus
NASA
news
tomorrow