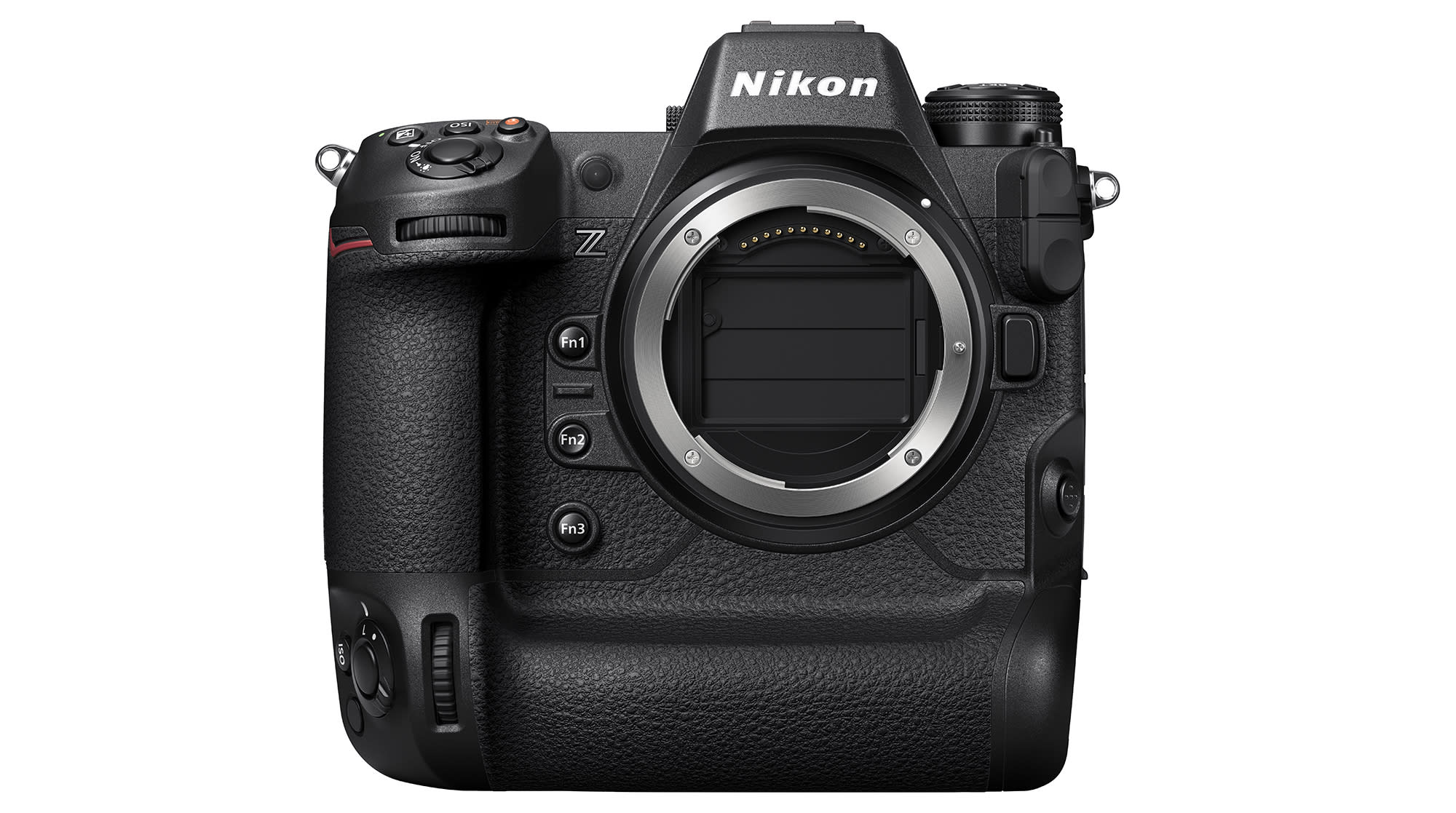 Nikon has officially unveiled its new flagship mirrorless camera, the $5,500, 45.7-megapixel Z9 with 8K 30p video and up to 20 fps RAW burst shooting speeds. It's Nikon's first camera to use a stacked sensor with built in memory that allows for very fast readout speeds. In fact, Nikon is so confident in the electronic shutter that it has abandoned the mechanical shutter entirely, so the Z9 is the first high-end professional camera without one.

With that high-speed sensor (which has the same megapixel count as the Z7 II), the Z9 allows a flash sync of up to 1/200th of a second, which looks like the fastest sync speed ever for an electronic shutter. That should also make it very resistant to rolling shutter, which is crucial if the camera is to be used for sports or action photography.

The faster sensor allows JPEG burst shooting at up to 30 fps, or RAW photos at 20 fps. If you're willing to drop down to 11 megapixels, you can shoot photos at an astounding 120 fps. As with other stacked sensor cameras, the Nikon Z has much improved buffering, letting you capture up to 1,000 frames at once with either JPEG or the new HE (high efficiency) RAW compression algorithms.

Nikon's autofocus (AF) system is also all-new, and makes even more extensive use of AI algorithms. Much like Canon's EOS R3, it can now track a wide range of subjects, including the eyes, faces and bodies of people, along with dogs, cats and birds, planes, trains, motorbike and bicycles. And unlike other AI cameras, there's no need to tell it what you're shooting — the camera will figure that out if you set it to "Auto" (or, you can set the subject type manually). It also offers a "3D tracking" system much like you can find on Nikon's DSLRs. All of this falls into line with the Z9's purpose as a sports/action/wildlife photography camera.

Nikon has also improved its in-body stabilization system (which it calls "vibration reduction" or VR). Now, it can combine in-body and lens stabilization system for steadier video or fewer blurry photos. This will only be available with several lenses to begin with, however, namely the Nikkor Z 70-200m F/2.8, Z MC 105mm f/2.8 VR and freshly announced Z 100-400mm F/4.5-5.6 VR S.

Video performance is equally impressive, as Nikon teased earlier this year. The Z3 will be able to capture 8K at 30p at launch, along with oversampled 4K 30p from an 8K capture that should be incredibly sharp. If you don't mind pixel binning or line skipping, it will also be able to capture 4K at up to 120 fps.

To start with, you'll be able to capture these formats at up to 10-bit with H.264 or H.265 long GOP codecs. On top of that, Nikon is offering the very useful option of capturing video with ProRes 422 HQ compression, which is much easier to edit straight out of the camera.

Things will get even more interesting later on, though. Nikon plans to introduce a future firmware update that will enable 12-bit 8K 60fps capture in a new, proprietary N-RAW format or using Apple ProRes RAW HQ capture at 4K/60p. Nikon promises that you'll be able to capture the oversampled 4K/30p for more than two hours at "normal" temperatures.

The Z9 has a large pro-style body with controls about where you'd expect them, other than a repositioned play button and AF button near the front. It uses dual CFexpress Type B slots (backward compatible with XQD) for maximum performance for video and burst photos. The new large, EN-EL18d battery is rated for up to 740 shots per charge with the LCD, or 700 shots with the EVF enabled.

It has a 3.69 million dot OLED viewfinder with just a 60 fps refresh rate, but Nikon said that it always delivers that speed and never downgrades it no matter what you're doing. It uses a multi-direction rear LCD and not a fully-articulating screen, but you can tilt the screen up either in the horizontal or vertical configurations.

With the Z9, Nikon has taken some of the best aspects of Canon's EOS R3 and the Sony A1 and married them into a single, large body. It falls a bit short of those models in terms of shooting speed, and the electronic viewfinder isn't too impressive on paper. However, Nikon seems to have vaulted ahead of both Sony and Canon in terms of video specs, particularly when the firmware update arrives — though we'll have to wait and see if video autofocus is up to snuff. The Nikon Z9 will arrive by the end of the year in the US at $5,500 for the body only.

Along with the camera, Nikon also launched two new apps, NX MobileAir and NX Tether. NX MobileAir allows photographers to transmit images to a smartphone at high speeds via USB cable, then upload them over 5G. It also supports image-editing functions like trimming and IPTC metadata editing. The NX Tether app, meanwhile, allows for tethered studio shooting so photos to be tweaked immediately after shooting.

All products recommended by Engadget are selected by our editorial team, independent of our parent company. Some of our stories include affiliate links. If you buy something through one of these links, we may earn an affiliate commission. All prices are correct at the time of publishing.
View All Comments
Nikon officially unveils the 45.7-megapixel Z9 with 8K video and 20 fps burst speeds