Nikon Z7 II review: A solid upgrade that lags behind its rivals

At a time when the global camera business is struggling, Nikon may be struggling the most. While it kicked off its mirrorless lineup well with the promising new mirrorless Z-mount system and the full-frame Z6 and Z7 models, it has lagged behind rivals on the technology side. That’s been reflected by the company’s reported flagging profits in its most recent quarter.

Nikon is reportedly working hard on an upcoming Z-series camera that should arrive sometime in 2021 with 8K video and other impressive features. In the meantime, Nikon launched the Z6 II and Z7 II, successors to the original models.

As its name suggests, the 45.7-megapixel Z7 II is more like a refresh than an all-new camera. However, it does have some significant new features like improved autofocus, dual card slots and 4K 60 fps video. I’ve recently tested its main rivals, including the Sony A7R IV and Canon R5 -- and both were very impressive. Now, I’m curious to see how Nikon’s latest model fares in comparison.

Since the Z7 II body is nearly identical to the Z7, there’s not a lot to discuss here. Other than the logo change and a slightly larger memory card door (to accommodate the new SD memory card slot), you’d swear you were looking at the original model.

That’s not a bad thing. I liked the Z7’s handling, thanks to the generous complement of manual controls and its deep, comfortable grip. All the dials, buttons and joystick are well-positioned to make the camera both fast and easy to shoot with. The Z7 II is also built like a tank, so I’d feel confident taking it nearly anywhere.

The menus and interface are also largely unchanged. You can navigate the menus using the joystick or touch display, though the menus are a bit dense. As such, it can be a bit difficult to find a setting compared to Sony and Canon’s latest cameras, so your best bet is to take some time to set the camera up using the custom settings menu.

The 3.2-inch, 2.1-million dot rear display is very sharp, matching Canon’s R5 and beating the Sony A7R IV. However, it only tilts one way and doesn’t swivel, so you can’t use it for vlogging or selfies. It’s generally fine for its intended landscape shooting purpose, though.

While the display may be sharp enough, the Z7 II packs a 3.69 million dot OLED electronic viewfinder, which is a bit too low-res for a camera with this many megapixels. All of its main rivals, including the R5, A7R IV and Panasonic S1R have 5.76 million dot EVFs.

One of my biggest problems with the original Z7 was the single XQD card slot. Luckily, Nikon addressed that on the Z7 II by adding a second slot, so you now get both a CFExpress and UHS II slot. That will give professionals a backup while shooting, or let you choose between faster CFExpress storage or cheaper UHS II cards.

Another key flaw that Nikon addressed is battery life. A new battery design allows for 420 shots, nearly double the previous model -- though still well below Sony’s A7R IV, which can hit up to 670 shots on a charge. It greatly extends video recording times as well -- I was able to get nearly two hours of 4K 25 fps video recording on a charge if I avoided using the EVF.

The ports remain unchanged: You still get mini HDMI, USB 3.2 and microphone and headphone ports -- a full complement suitable for video shooters. The USB-C port can power the camera externally while shooting, which is a good option for studio photographers.

Along with improvements in the display, storage and battery life, Nikon has made some gains on the performance front too. The sensor hasn’t changed, so most of that is thanks to an update from single to dual Expeed 6 processors.

As before, it shoots at up to 5.5 fps with continuous AF enabled, or 10 fps in single-shot AF mode. However, it now has a much larger buffer, so you can take 77 12-bit RAW photos before it will stop -- not bad, considering the 45-megapixel image size. The EVF is more responsive too, so it blacks out less during continuous shooting.

More of those shots will be in focus as well, thanks to some AF improvements. It now works better for continuous shooting -- if you touch to select a subject, it will stay locked on pretty tenaciously. I also saw improvements in face and eye-detect mode, as it tended to keep a lock even if my subjects turned around or stayed out of frame. And you can focus in lower light down to -3EV, or even darker using the “Low Light AF” feature. 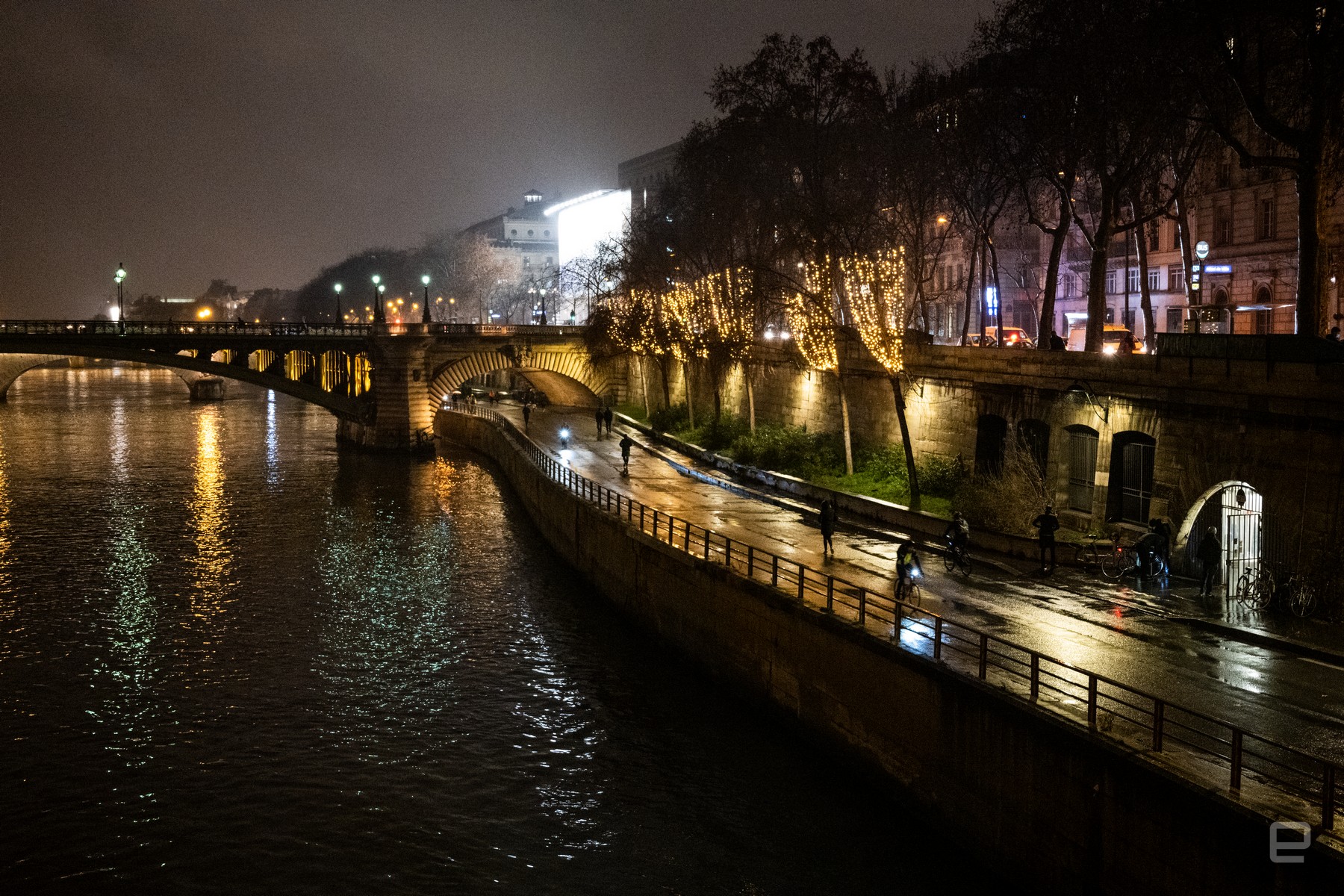 Subject and face/eye tracking is also made easier with a new feature. If you’re shooting in groups, you can keep it limited to one area so that it doesn’t jump over to the wrong subject. That was a problem before with Nikon’s eye AF in particular, as it tended to jump between subjects if more than one was in the frame.

If you want to use the silent electronic shutter to avoid disturbing your subject, there’s one big negative with the Z7 II. It has a severe rolling shutter effect, so if you pan quickly you’re likely to get skewed vertical lines.

The Z7 II does have in-body stabilization, but it offers only 5 stops of shake reduction compared to 8 on the EOS R5. In real-world use, that means you might need to shoot at a slightly higher shutter speed, or else crank up the ISO and risk a slightly noisier image.

Luckily, the Z7 II delivers excellent high-ISO performance for low-light situations, second only to Sony’s A7R IV for high-resolution full-frame cameras. I was able to get good photos with usable noise up to about ISO 12,800. And even at higher ISO levels, I didn’t lose much in terms of sharpness and color reproduction.

It also works very well at the other end of the ISO scale. As before, you get a base ISO of 64, which is very handy for outdoor shooting in bright light. At such a low ISO level, I got extremely clean, noise-free images, so I could expose for highlights and boost shadows in post without adding much noise, even in sunny, high-contrast conditions.

When it comes to video, I’d recommend Nikon’s Z6 II over the Z7 II, as the latter isn’t really designed for that purpose. Still, the Z7 II is pretty competent for video and much improved over the first model.

As usual, image stabilization works well for handheld video as long as you don’t try to walk or move around. With Nikon’s latest improvements, video autofocus generally tracks moving or still subjects better than ever, but it’s still not quite up to Canon or Sony’s latest standards.

You can shoot 8-bit 4K/60p video with a small 1.08X crop, rather than just at 30 fps like the original Z7. As before, however, the Z7 II does do line-skipping for 4K video when you use the full sensor width, unlike the Z6 II. You can only get sharp, oversampled video if you crop down to an APS-C sensor size -- meaning you lose depth of field and get a 1.5x zoom.

On top of the line-skipping, another issue with shooting video using the full sensor width is rolling shutter. If you try to pan the camera quickly, you’ll get very noticeable jello or line skewing. This is far less noticeable when shooting with an APS-C crop.

You can output 10-bit N-Log or HLG HDR footage, but only via the HDMI port to a compatible recorder. And unlike the Z7 at launch, the Z7 II supports external RAW video recording at up to 4K (with a crop) or in HD using the full sensor.

I shot video both internally and on external recorders using the N-log mode. Even using the full sensor, it was relatively sharp and delivered rich, accurate colors. Thanks to the excellent dynamic range, I found I had a lot of room to adjust the video in post, particularly when shooting in log or HLG modes. That said, the lack of internal 10-bit, log and RAW recording is a drawback for pro videographers, compared to the Canon R5.

When Nikon and Canon released their first full-frame mirrorless cameras, I gave the edge to Nikon. Now that Canon and Nikon have both released new standard and high-resolution cameras, what’s the verdict in 2021?

This time, Canon wins. While the Z7 II has slightly better image quality, the R5 is superior in nearly every other way. It’s far better for video and has superior autofocus, stabilization and shooting speeds.

I’d chalk this up to the fact that with Canon’s improved technology, the EOS R5 is a giant leap over the EOS R. Nikon only made iterative improvements, so the Z7 II lacks that wow factor.

That doesn’t mean the Z7 II is a bad camera, and at $3,000, it’s nearly a grand less than the R5. It’s also $500 cheaper than Sony’s A7R IV. If image quality is crucial and you have a limited budget, I’d recommend the Z7 II. If money is less of an issue, I’d point you to Sony’s A7R IV for landscape and studio work, or the Canon R5 if video is equally important -- unless you want to wait for Nikon’s next-generation models.