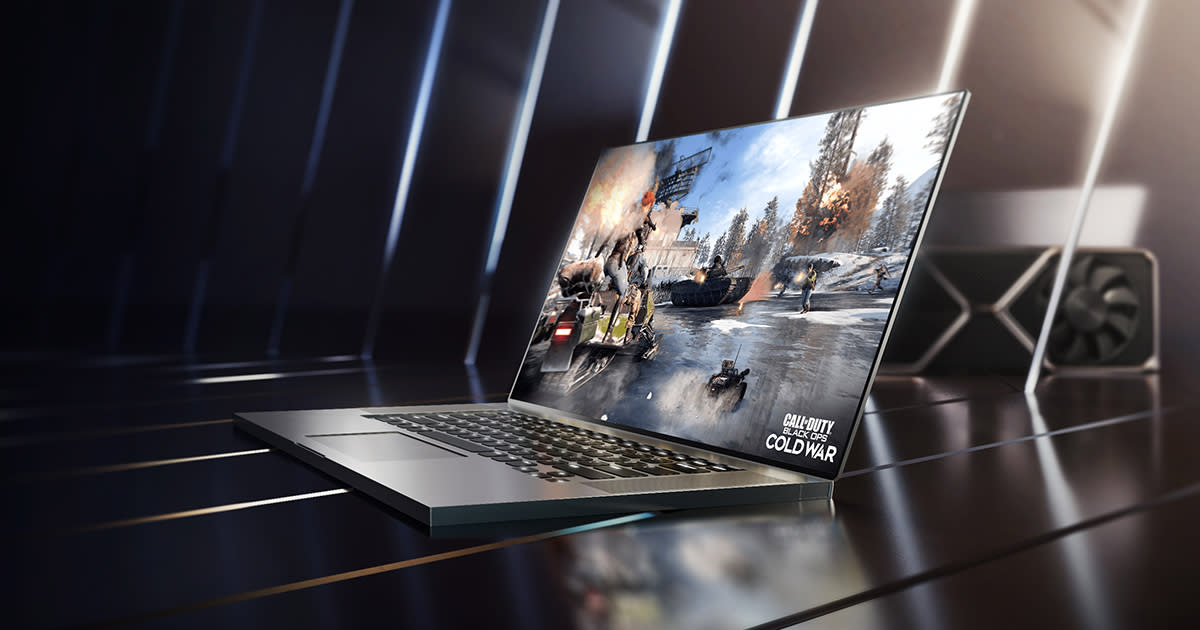 You can finally say goodbye to the GTX 1650.

After Samsung spoiled the surprise last month, it was only a matter of time until NVIDIA confirmed the existence of its new mainstream laptop GPUs. Today, the company is officially unveiling the RTX 3050 and 3050 Ti. They deliver the ray tracing and AI features from the rest of its RTX line, but with a much lower starting price around $799. While they're not nearly as powerful as NVIDIA's beefier GPUs, the RTX 3050 and 3050 Ti will offer some serious upgrades for gamers on a budget. And for once, it means they won't have to settle for NVIDIA's aging Turing laptop GPUs, like the GTX 1650 Ti.

In Call of Duty:Warzone, NVIDIA claims the RTX 3050 Ti can reach over 80 FPS in 1080p with medium graphics settings, and upwards of 95FPS when you flip on DLSS. That technology renders a game at a lower resolution and then uses AI to upscale what you're seeing, delivering higher framerates in the process. In comparison, the GTX 1650 Ti reached around 55FPS in Warzone. The new GPU can also reach upwards of 70FPS in Outriders, whereas the 1650 Ti couldn't even crack 40FPS in 1080p.

Of course, the raw power upgrade is to be expected. What makes the RTX 3050 and 3050 Ti intriguing is their support for RTX ray tracing, which can deliver realistic lighting effects in modern games. NVIDIA claims you'll be able to play Control in 1080p with medium graphics and ray tracing settings, along with DLSS, above 60FPS. That game has been my ray tracing stress test for the last few years, and I'd be truly impressed if NVIDIA is able to make it playable with ray tracing on systems below $1,000.

Under the hood, the RTX 3050 and 3050 Ti feature 2,048 and 2,560 CUDA cores, respectively. That's well below the 3,840 CUDA cores on the RTX 3060, but they should still be powerful enough for gamers focused on 1080p performance. It's also worth noting that NVIDIA is only sharing RTX 3050 Ti benchmarks at the moment. I'd be interested to see if the 3050, which also has fewer tensor AI and RT cores, will actually perform with ray-traced games. Both GPUs also come with 4GB of GDDR6 RAM and a 128-bit memory interface, specs that'll limit their performance mainly to 1080p gaming. These are also Max-Q GPUs, which means their performance can be optimized to squeeze into thin laptops. (There's no word of an RTX 3050 desktop GPU yet.)

Just like the GTX 1650 and 1660 Ti, I'd also expect to see the new RTX GPUs in mainstream laptops that go beyond the world of gaming. They feature the NVIDIA's hardware encoder and decoder, which should help beef up video rendering. And since they're still RTX video cards, you can also use the NVIDIA Broadcast app to clean up your audio or video on streams and video calls. Personally, I've found NVIDIA's video background blur implementation to be particularly smooth on my desktop, and I'd wager it would be a huge upgrade for laptop webcams.

You can expect to find RTX 3050 and 3050 Ti laptops in the coming months, including Samsung's new Galaxy Book Odyssey.