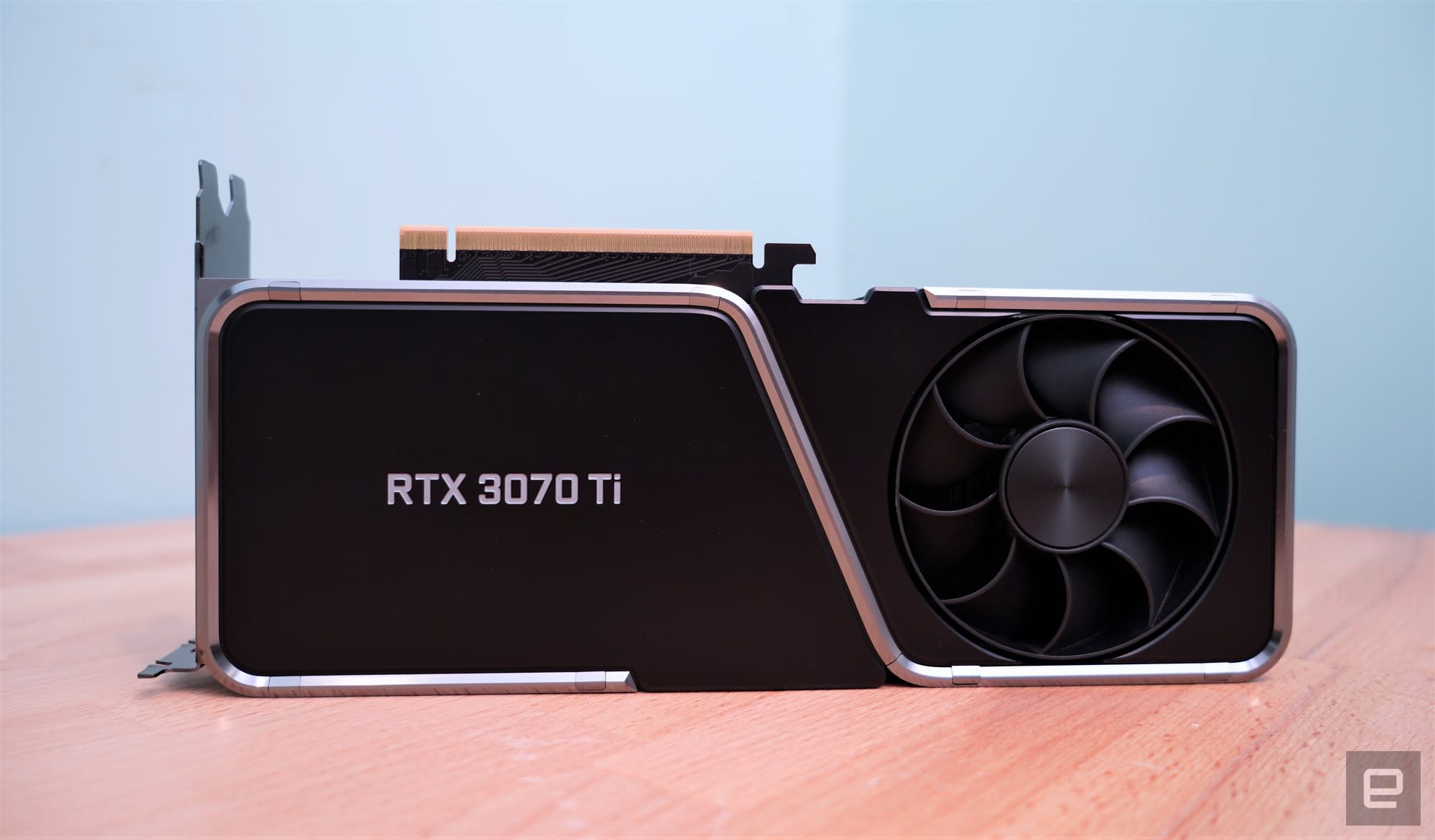 In one of my grand fantasies, a world where video cards actually cost as much as their retail prices, NVIDIA's RTX 3070 was an absolute steal. When we reviewed that GPU in October, the Founder's Edition was supposed to cost $499 and be just as fast as NVIDIA's previous flagship, the $999 RTX 2080 Ti. In reality, though, the global chip shortage and a proliferation of scalpers drove the cost of the 3070 up to $1,500 on eBay. On the rare occasion you could find it in stores, it typically sold for around $800.

So really, who knows how much NVIDIA's new mid-range GPU, the RTX 3070 Ti, is actually going to sell for. The company says its retail price is $599, though, so that's what we'll run with for now. The real question: Is it really worth a $100 price increase over the 3070, especially when the far more capable RTX 3080 is listed at $699? Yes and no.

Given the minimal spec bump over the 3070, I didn't expect a huge performance jump from the Ti model. The benchmarks just proved my hunch: The 3070 Ti hit 6,842 points in 3DMark's TimeSpy Extreme test, compared to 6,226 on the previous card. Similarly, I saw close to a 10 percent improvement in the Port Royal raytracing benchmark. That's nice to see, but it's not enough to make 3070 owners regret their purchase. Unfortunately, I didn't have a RTX 2070 Super to compare on my current rig — which is powered by a Ryzen 5800X and 32GB of DDR4 RAM — but it scored 4,474 in TimeSpy Extreme with my last system. NVIDIA claims the 3070 Ti should deliver up to 50 percent faster speeds than the 2070 Super.

The comparison was similarly small once I flipped ray tracing and DLSS, NVIDIA's feature which renders games at lower resolutions and upscales them with AI processing. The 3070 Ti reached up to 55fps while running Control in 4K with 1440p DLSS rendering and medium ray tracing settings. The 3070 hit up to 52fps. 2070 Super owners will definitely notice a bigger difference though. That card scored 5,845 points on the Port Royal benchmark on my old system, compared to 8,745 with the 3070 Ti on my new build. (And since that's a mostly GPU-bound test, the numbers are still worth assessing.)

Since it's more power-hungry, the RTX 3070 Ti also ran hotter than the 3070 after hours of gaming and benchmarking. I reached up to 78 Celsius (the same as the RTX 3080 Ti), whereas the 3070 leveled out at 70 Celsius. This isn't too surprising, though, given that the Ti is using the same case and cooling design as the earlier card. Fan noise was more persistent too, but that's to be expect for a hotter card.

In a world where GPUs were actually easy to buy, the 3070 Ti doesn't strike me as a major leap ahead of the 3070. If you're willing to spend $599 on a video card, what's another $100 to reach touch heights of gaming nirvana with the RTX 3080? That card would be even more capable with 4K and 1440p performance, and it's better equipped to crank up ray tracing settings. Perhaps NVIDIA just needs some better naming conventions so we can really tell its GPUs apart. As we noted in the RTX 3080 Ti review, that graphics card is basically a less powerful 3090, hence the $500 price bump and the more noticeable performance gain from the 3080. The 3070 Ti, meanwhile, is a slightly souped-up 3070.

My big takeaway: it's hard to tell what GPU you'll actually be able to buy. So if you're desperate, and need something for your new rig, you'd probably be satisfied with the 3070, the 3070 Ti or the 3080. Buy what you can and run before someone notices what you're holding.