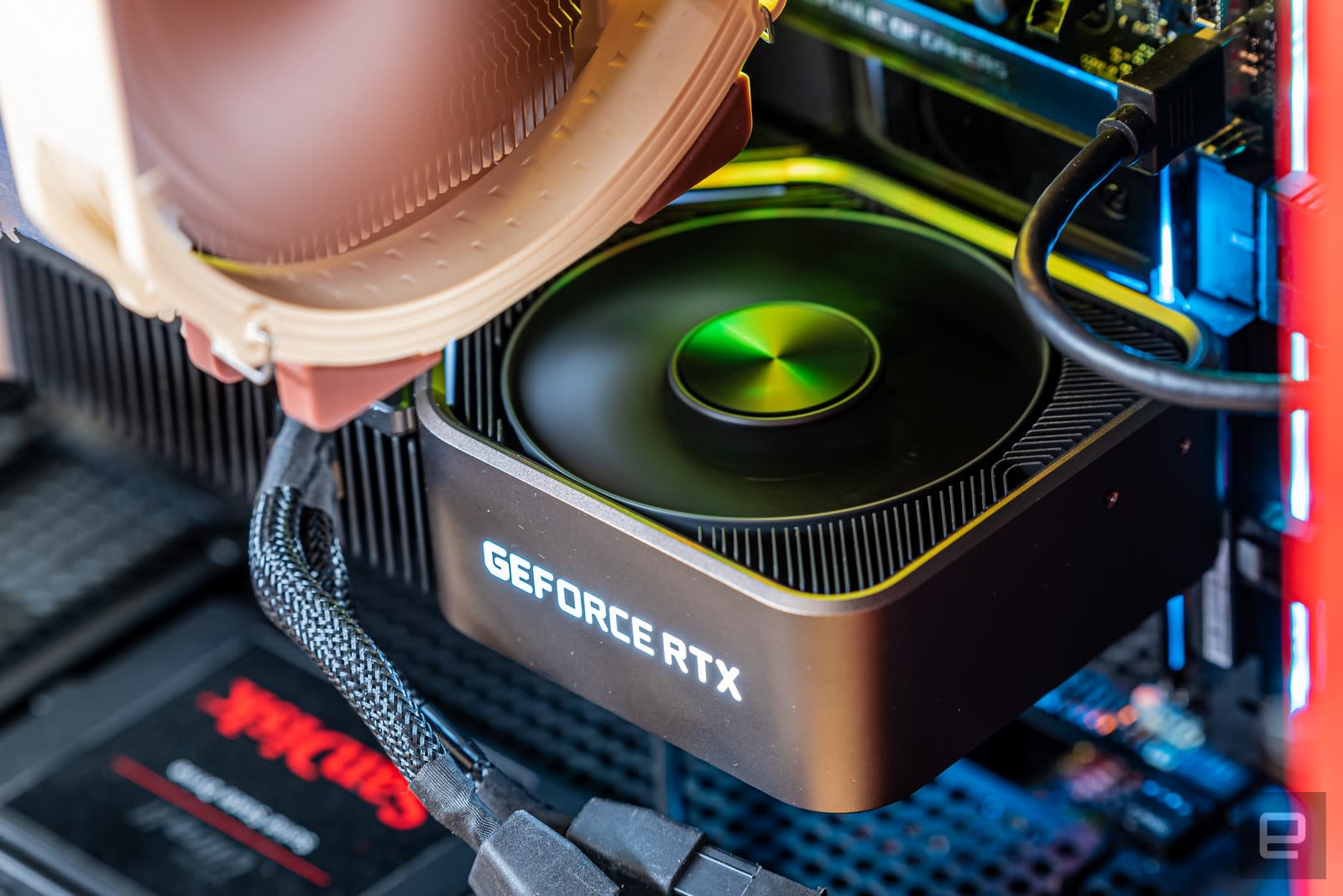 NVIDIA spent the past two years selling the idea of real-time ray tracing. And I mean, really selling it. There was the slick Star Wars demo that showed where the technology could lead. There were partnerships with EA to bring it to games like Battlefield V. But there was also a big problem: Ray tracing is a serious resource hog, even with the top of the line RTX 2080 Ti. (Just ask anyone who’s played Control.)

That’s where the GeForce RTX 3080 comes in. Its Ampere architecture is more powerful than its predecessor, Turing, in every way. But most importantly, it can finally tackle ray tracing in 4K while still keeping you close to 60 frames per second. And at $699, it’s pricey, but it’s still far more accessible than the absurdly powerful $1,499 RTX 3090.

What’s truly compelling about the RTX 3080 is that it’s more than just a successor to the $699 2080 — it genuinely blows away the $999 2080 Ti. No matter what you think of NVIDIA’s hype-fueled marketing, that’s an impressive feat. And if you held off on upgrading last generation, this is a no-brainer.

Before we dive into specs, it’s worth exploring why there’s so much fuss around ray tracing. Basically, it’s a more realistic way of rendering light in games. Ray traced light sources can do things like cast accurate shadows, and make reflections bounce off of surfaces naturally. It may sound superfluous, but based on what I’ve seen in Minecraft and Control, it can seriously help with immersion. 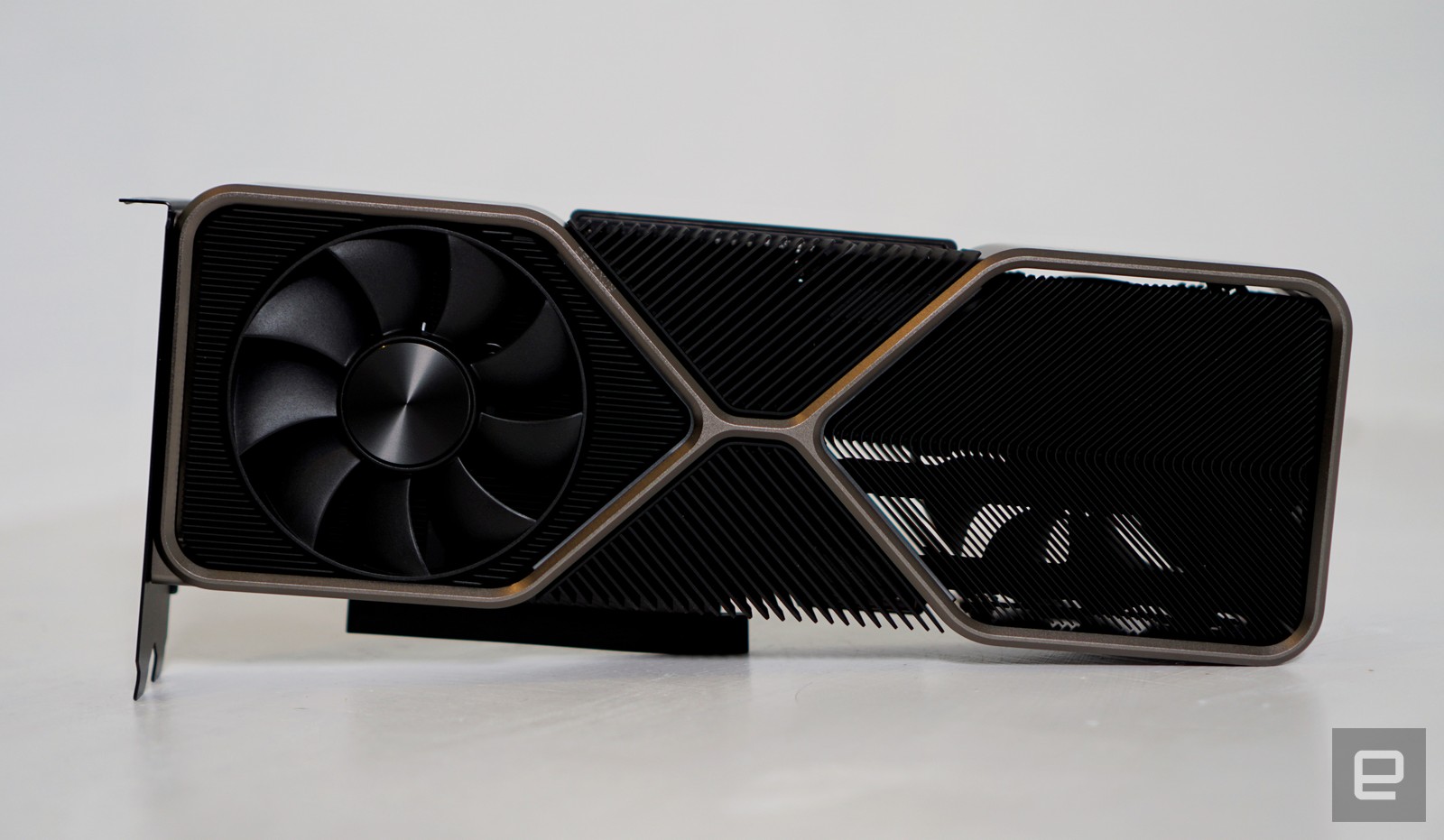 The 3080 Founders Edition card we reviewed isn’t much bigger than the 2080 Ti. It has a sleek, almost office-professional aesthetic that’s a nice contrast to the gaudy third-party cards we’ll inevitably see. The cooling is also dramatically different: NVIDIA made the PCB more dense to fit a fan that blows air directly through the card, while another ejects warm air from the rear. There’s also a new compact 12-pin power connector that opens up more room on the PCB (and yes there’s a dongle in the box for two 8-pin cables).

Under the hood, the RTX 3080 is powered by 8,704 CUDA Cores, 68 RT ray tracing cores and 272 tensor AI cores. It has more than twice as many CUDA cores as the RTX 2080 Ti, and while its RT count is the same, the new architecture is around twice as fast.

Surprisingly, its tensor core count is dramatically lower than the 2080 Ti, just 272 compared to 544. But again, NVIDIA claims this new generation of tensor AI cores is significantly faster than before. And if all that isn’t enough, NVIDIA also stuffed in 10GB of GDDR6X RAM, a new type of memory that’s making its debut in the RTX 3000 GPUs.

All of that hardware is in the service of one thing: Making the RTX 3080 the fastest GPU we’ve ever tested (that is, until we get our hands on the 3090). It reached 82FPS in the Shadow of the Tomb Raider benchmark, while running in 4K with maxed out graphics settings and “ultra” RTX shadows. In comparison, the 2080 Ti hit only 52 FPS. It clocked in around 2,500 more points in the 3DMark Port Royale ray tracing test, as well as 1,400 more points in the TimeSpy Extreme 4K benchmark. The big takeaway: this GPU isn't just a modest improvement over NVIDIA's last card, it's a huge leap forward.

The 3080 also made Control playable in 4K with all of the graphics and ray tracing settings dialed up. It sat comfortably between 53 and 60FPS. I had to turn on DLSS to reach those speeds, though. That's NVIDIA's technology for upscaling low-res textures with its AI cores. The 2080 Ti, topped out at around 40FPS. Running Control natively in 4K on the 3080, without DLSS's help, I hit a middling 32FPS. Clearly, ray tracing can still crush this hardware, which is why NVIDIA is investing so much in other ways of delivering high-res gameplay.

If you're lucky enough to have a high-refresh rate 4K monitor or TV, the 3080 will also help you get the most out of that. I was able to play Wolfenstein: Youngblood in 4K with DLSS and ray tracing settings turned on at around 119 FPS. The 2080 Ti, meanwhile, could only hit around 70 FPS. I've argued for a while that framerates matter more than rendering resolution -- the 3080 will finally let you have both. 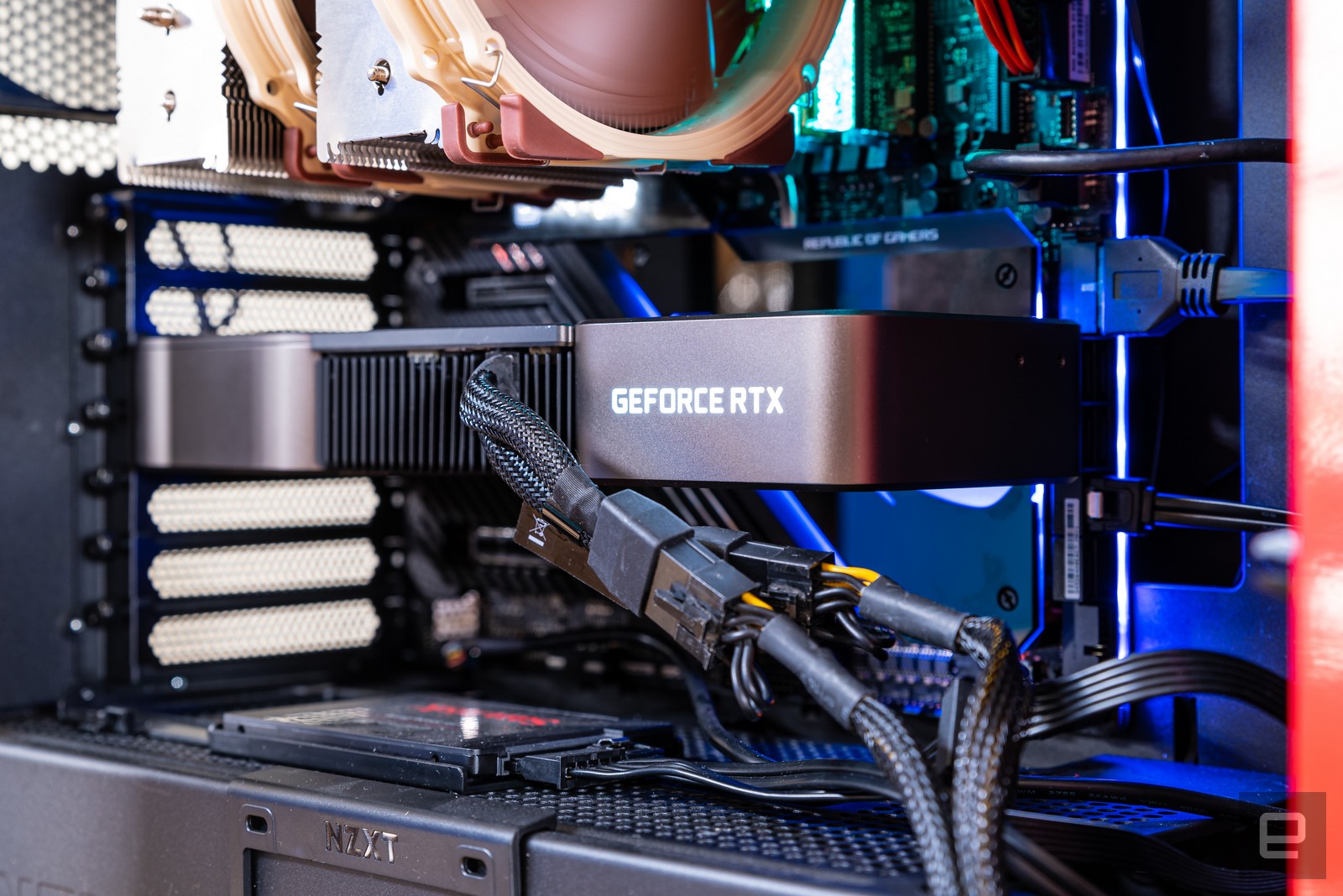 And as it’s delivering incredible performance, it still manages to stay relatively cool. While running benchmarks and playing Control, the 3080 typically warmed up to around 80c. And once I stepped away from a 3D heavy app, it quickly cooled down to 35c. The 2080 Ti, meanwhile, idled around 41c and got up to 86c under load. The 3080 is pretty loud when you're stressing it, but that's true of every air-cooled CPU. I noticed a significant difference in idle noise, though. The 3080 barely sounds like it's running when I'm just browsing the web, whereas the 2080 Ti’s fans spin up and whine regularly.

The 3080 also comes in handy for compute heavy operations like video and 3D rendering. In the Luxmark Luxball HDR benchmark, which tests the GPU’s performance for parallel processing work, the 3080 scored 68,701. The RTX 2080 Ti, meanwhile, hit 40,331 (a score that blew us away at the time). It also reached a whopping 200,536 CUDA score in Geekbench 5, about the same as the Tesla V100 datacenter GPU, which typically costs over $8,000.

So if you're in the content creation business, or just like to dabble in media for fun, you could justify the 3080 as an actual work tool too. If you're a professional, you may also want to wait until the $1,499 3090 is available on September 24th. That's out of reach for most consumers, but it could be a lifesaver if you're regularly shooting and editing in 4K and higher resolutions. 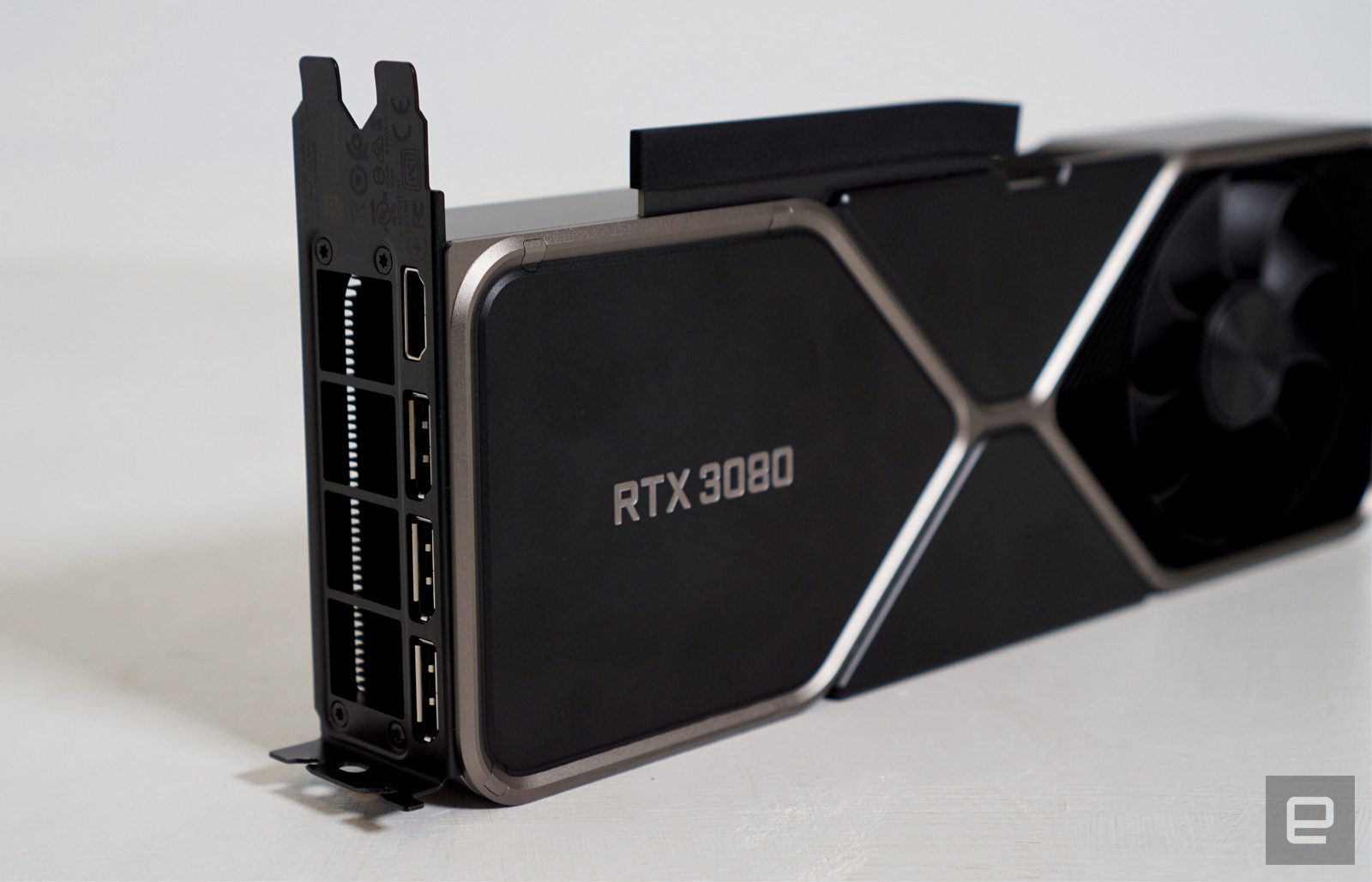 Here’s the real question: Do you need the $699 RTX 3080? Right now, it's a tremendous value for PC gamers with deep pockets. But, the $499 3070 card also looks very compelling, and will deliver speeds beyond the 2080 Ti. This GPU seems aimed squarely at the people who shelled out big bucks for the GTX 1080 four years ago. Ray tracing wasn't enough of a draw with the 20-series cards, but it's hard to deny the call of realistic lighting alongside fast 4K gameplay.

And if you don't need a brand new card right away, it's always smart to wait a bit to see how the competition responds. AMD hasn't announced its next-generation GPUs yet, but we know its tech will be headed to the PlayStation 5 and Xbox Series X and S. There's a good chance we'll see GPUs from AMD soon that are cheaper than the 30-series delivering similar speeds.

While NVIDIA's first RTX GPUs were all about the potential of ray tracing, the 3080 is built for a world where it finally exists. It's an expensive GPU, but a great value considering the performance.