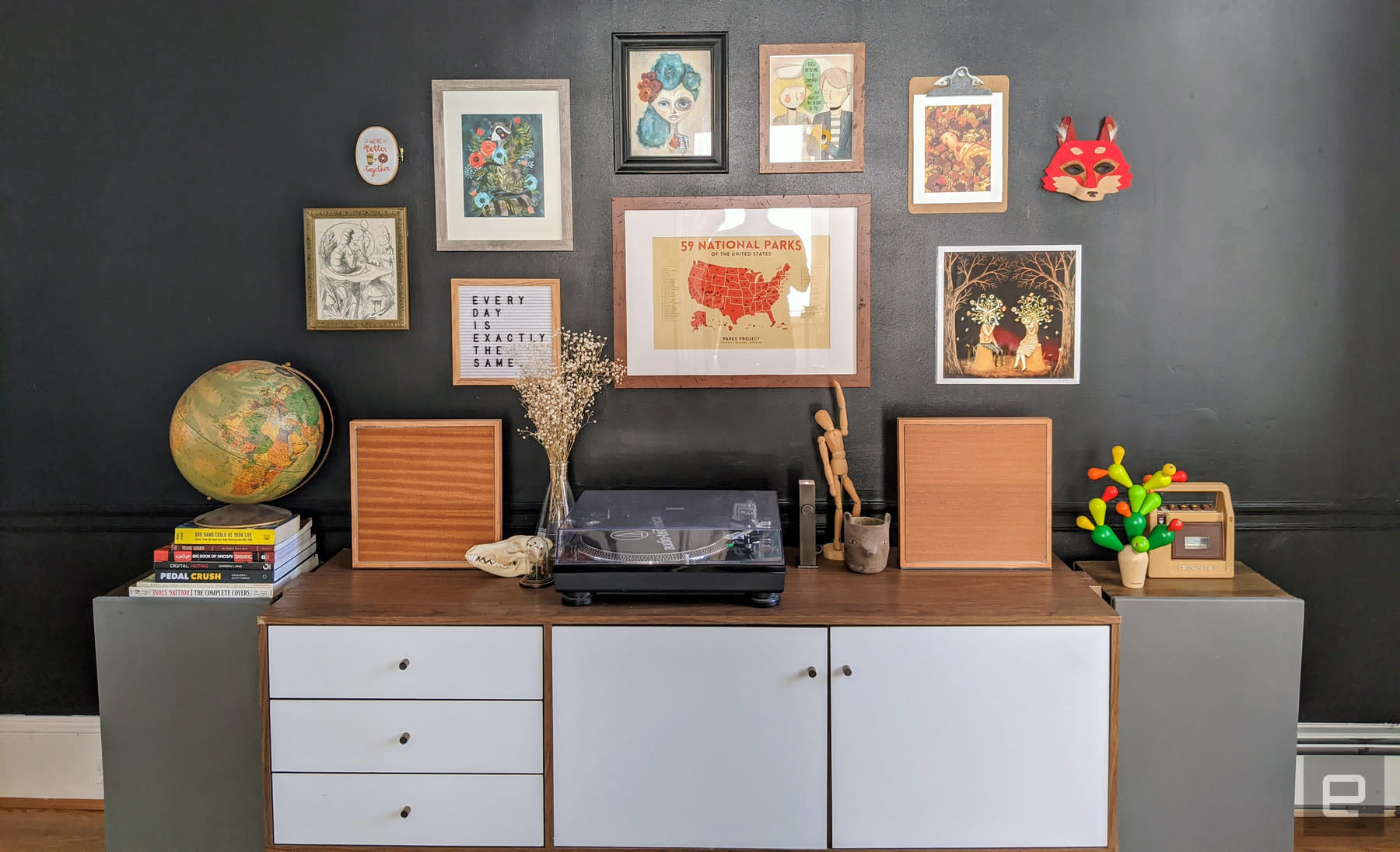 Unfortunately, there's no low-commitment way to give the service a try.

I am a bit of a live music junkie.

In my twenties I would usually go to at least one show a week (and often many more). Even now, as I unenthusiastically race towards 40, with a career, a small child and generally a lot more obligations, I try to see at least one concert a month. When the pandemic shut everything down in mid-March I already had four shows scheduled through the middle of May. Obviously those have all been cancelled or rescheduled. As such, I’ve been going through what can only be described as live music withdrawal.

So of course, the proposition of Oda seems appealing to me. It’s a pair of speakers where the main selling point isn’t the speakers themselves -- it’s the access they grant to an exclusive subscription of live music and artist “station” takeovers.

A three-month season of Oda will cost $79 when the first one starts on December 21st, and that’s in addition to the speakers, which are $299 if you preorder them. (That price will later increase to $399 .) Now, $79 for three months of live performances, interviews, etcetera isn’t cheap. But Oda has built a pretty impressive lineup right off the bat, with performers across a variety of styles including Don Bryant and Ann Peebles, Madlib, Arca, The Microphones, Bradford Cox (Deerhunter / Atlas Sound), Jessica Pratt, Standing on the Corner and KeiyaA. Not to mention, legendary experimental minimalist composer Terry Riley and Harlem jazz icon Marjorie Elliot are among the artists in residence.

I did not get to experience any of those acts, sadly. But I was treated to short live performances from Andy Bey and Angel Bat Dawid during my two days of testing.

Let’s start at the beginning, though: Setting up the speakers is quick and painless. You just stick the panels on their magnetic bases, plug them into the “lighthouse,” fire up the app and follow the onscreen instructions. It only took five minutes from the moment I unpacked them to get everything hooked up and streaming.

Even though I’d seen them in photos, the speakers were still smaller than I expected. Instead of using traditional drivers, Oda are distributed mode loudspeakers (DML), which means they use exciters to vibrate a flat panel instead of a cone. There are some advantages to DML systems, size being the obvious one. The speakers would blend into most rooms nicely thanks to their simple, mostly wooden design. The units I had were not completely final, and the retail models will be made of cherry wood. They might be a little too minimal for some, but sometimes it’s better to be plain than too ostentatious.

The panels themselves attach magnetically to a pair of deceptively heavy baseplates. They’re made of dark gray, slightly worn-looking steel. The cold texture matches that of the lighthouse, which houses the DSP and all the necessary streaming hardware. The lighthouse -- so called because of its status light on top -- is also an exercise in minimalist design. The light on top, which tells you when there’s a livestream happening, is also a button that switches between the stream and the line-in or bluetooth connections. On the front there’s a volume knob and… that’s it.

Around back are the connections for the speakers as well as an ⅛” line-in jack. Basically, you’re getting the bare necessities in order to keep the focus on the live music.

Before we get to the live programming part of things, let’s pause quickly to address the sound quality. These speakers sound pretty damn good. They’re bright and airy with a lot of presence. The clarity across all frequencies is solid, but especially in the mids and highs. My one complaint is that these flat panels simply can’t produce enough bass. I volume matched Oda to my unbranded vintage stereo speakers and then switched back and forth to compare.

Oda were obviously better-quality speakers overall, with a lot more clarity and more natural frequency response. They just had no thump. At volumes where my stereo would rattle the windows, Oda couldn’t even manage a mild tremor; the bass was always heard, never felt. That’s not necessarily a huge deal for a live Andy Bey performance where the only instruments are a piano and his voice. But, when it comes time for the skittering electronics of Arca and the boombap-inspired beats of Madlib, that lack of lowend might be a bigger concern.

Not too mention, Oda isn’t going to be streaming live music 24/7. In between those performances you’ll no doubt be using them to listen to your personal music collection. And if your tastes tend toward the bass heavy, these probably aren’t going to satiate your thirst for thump. The company is working on a subwoofer add-on, which should help alleviate that pain. But there’s not word on when that will land, what it will look like or how much it will cost.

That lack of lowend notwithstanding, the livestreams did sound fantastic. This is largely thanks to the top-notch production quality. Oda isn’t just having artists fire up Skype and sing into their laptops. They’re putting a lot of effort into the live mixing and sound quality.

The Andy Bey performance in particular was engrossing. You could hear him turning the pages in his song book and talking to himself between songs. But it didn’t feel sloppy; it felt intimate, like I had been invited into his home for a private performance. And knowing that this would be my only opportunity to hear it made me sit in rapt attention. There are no archives or reruns on Oda. Once a performance is done, that’s it.

The avant garde jazz of Angel Bat Dawid was similarly demanding of my attention, though it ended rather quickly and abruptly, just as she seemed to be finding her groove. Of course the difference in styles between Bey and Dawid also helped elucidate the strengths and weaknesses of Oda a bit. Both were quiet, small-scale affairs. This plays well to the warmth and spare jazz piano arrangements of Bey. But Bat Dawid is often at her finest when she’s in wild freakout mode with a full band. Here the stripped-back experimental (and seemingly improvisational) performance sometimes felt like a warm-up exercise, rather than the main event.

Considering the lineup for the first two seasons of Oda and its origins, that its strength lies in quieter, vocal-focused styles of music is unsurprising. According to founder Nick Dangerfield, the project was first conceived back in 2017 when his friend, singer-songwriter Phil Elverum (Mount Eerie / Microphones), couldn’t tour behind the release of his latest album.

Once things get moving, though, Oda’s streams won’t be limited to live performances. While that will certainly be a cornerstone of the service, artists who have signed on for weekend takeovers are being given freedom to do almost whatever they want: curated playlists, interviews, readings, etcetera. So there’s value here --  the ability to get to know an artist beyond them simply singing a song for you.

It’s also worth noting that, when the speakers aren’t streaming artists live, you can tune in to the ambient sounds of the outside world. The location will change occasionally -- a forest in Vermont and a spot in Costa Rica are among some of the planned spots. But during my two days of testing, Oda was streaming live from Tompkins Square Park in the East Village. I’m a native New Yorker, so the sound of sirens and car horns is weirdly soothing to me. But the best part was catching snippets of people’s conversations as they strolled through the park, gems like: “He pissed blood on Sunday night and then on Monday he called me…” had me literally LOLing.

The biggest challenge confronting Oda: There’s no low-commitment way to test out the service. If you want access, you need to buy the speakers. Right now there is no plan to sell a separate subscription to the streams. Which is a bit of a shame.

Considering the artists lined up for the first two seasons, I’d consider paying $79 to at least give the service a shot. But, I don’t necessarily want to also drop $299 on a pair of new speakers, especially when I’ve already got a perfectly serviceable (if slightly beat-up) pair connected to my stereo. And that’s not counting the five Google Home speakers strewn about my house, the decent 2.1 system connected to our desktop computer and the studio monitors in my office. In short, I have enough speakers. What I don’t have is enough live music.