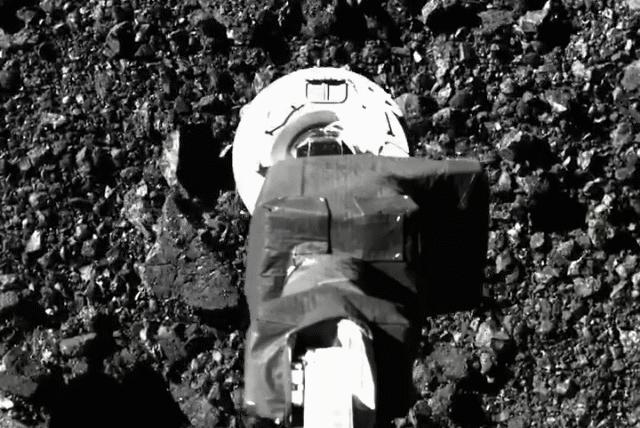 OSIRIS-REx became the first mission to gather samples from an asteroid in space after it successfully collected rocky “regolith” material from the surface of Bennu. Now, NASA has released several videos showing exactly how that six-second collection process looked, and the best way to describe it is “controlled chaos.”

NASA prepared for this moment for a long time, as OSIRIS-Rex first started orbiting Bennu in early 2019. It conducted surveys early on that revealed organic carbonaceous material spread widely over Bennu’s surface, particularly at the Nightingale site chosen for the sampling process. That gave NASA confidence that it would collect a sample with organic material, which was a central goal of the mission.

The sample collection process was a carefully orchestrated dance. OSIRIS-REx extended its 2 meter (6.6 foot) TAGSAM robotic arm with the 30 cm (1 foot) wide sampling head attached, while folding in its solar panels to protect them. The probe then slowly approached the surface, eventually touching down to within a single meter (3.3 feet) of the selected target. The entire process was monitored by the SamCam imaging camera mounted above the arm.

The camera shows the TAGSAM head approaching and then impacting Bennu’s surface at just 0.2 mph, penetrating in to the regolith. At first, it appears to crush some porous rocks below, and then a second later, fires a nitrogen gas bottle. That stirred up “a substantial amount of the sample site’s material,” NASA said, to put it mildly. It spent around five to six seconds collecting material, with the majority gathered in the first three seconds.

The head is designed to catch and store that stirred-up surface material. OSIRIS-REx will first take a picture of the collector head to confirm the presence of regolith, and then on Saturday, measure the mass of rock and dust by spinning on its axis like a centrifuge.

NASA said that the sampling “went as good as we imagined it could,” since it crushed a lot of material that should have been collected in the sample chamber. Scientists have already learned a lot about Bennu just by watching the video of the impact, but we’ll have to wait three long years for the spacecraft to return to Earth, before we can verify what it’s actually made of.