Fitbit will replace some Sense smartwatches due to ECG problem 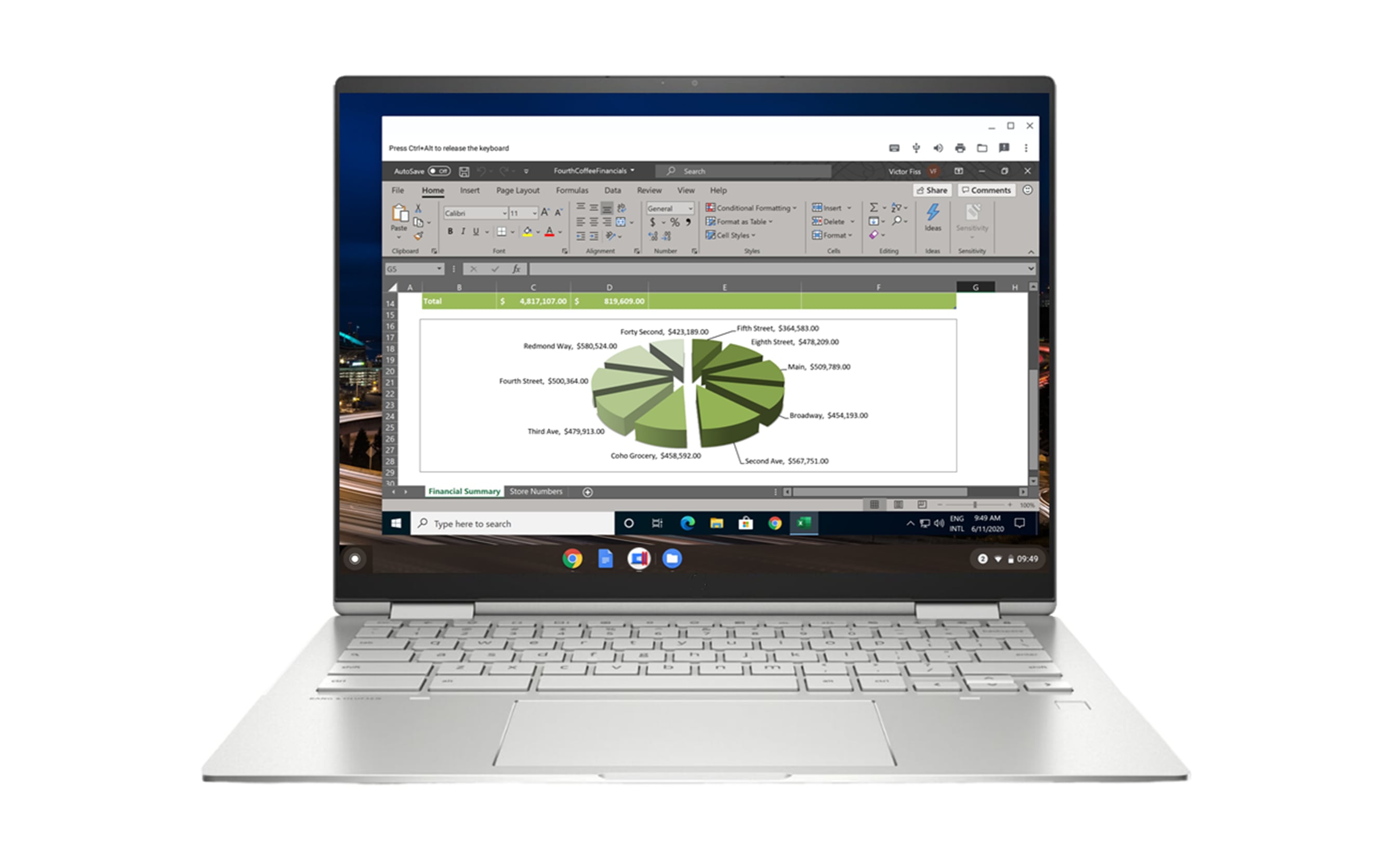 Chromebooks have become increasingly popular in both schools and businesses in recent years, but they still carry a bit of stigma when it comes to software compatibility. And it’s true that there are lots of apps you can get on a Mac or Windows PC that you can’t use on a Chromebook. That changes in a pretty massive way today, as Google and Parallels are announcing Windows virtualization support for Chrome OS. This means that, provided you have a Chromebook with the right specs, you’ll be able to run Windows apps side-by-side with everything else in Chrome OS.

There is a lot of fine print for how Parallels works on Chrome OS -- but at a high level, it’s not effectively different than the product the company has sold for the Mac for years. Provided you have a valid Windows 10 license, Parallels installs a virtual Windows machine in Chrome OS, providing a few different ways to interact with Microsoft’s OS. Like on the Mac, you can run a Windows instance full-screen, letting you fully interact with Windows. Or, you can open specific Windows apps and run them side-by-side with documents and apps on the Chrome OS side.

If you’re a Chrome OS fan and interested in this potentially big expansion of what your computer can do, there are a few things you need to know. Perhaps the biggest is that, at least for now, WIndows / Parallels support is only available for Chromebooks enrolled in an enterprise setting. Basically, if your business manages Chromebooks it deploys to employees, the administrators can enable Parallels and push out an update to install a specific virtual Windows machine to the organization.

That means that a normal consumer or enthusiast can’t try Windows on Chrome OS, at least not yet. Given that Parallels for the Mac has long been widely available for anyone who wants to use it, it seems likely that the same will happen with Chrome OS sooner or later. But for now, it’s only for use in this business setting.

Parallels did make it sound pretty easy for administrators to use. It can be managed from the Google Admin console, where IT departments can set up teams of users and decide whether they need access to Parallels and Windows. Furthermore, IT departments can also specify different virtual Windows machines with different software and settings relevant to each set of users -- so a design department could have access to Adobe apps, while a finance group would get QuickBooks, for example.

There are also a handful of integrations between Chrome OS and Windows to make working across the different systems easier. Copy and paste for both text and graphics works between the two systems, and a Windows installation will automatically recognize any printers that are set up in Chrome OS, as well. There’s also a “open with” feature built into Chrome OS that’ll let you select apps installed in Windows, so opening a Word doc will automatically launch Windows and open it in Word, instead of trying to import it into Google Docs. Similarly, you can decide where web links open -- they can be set to always be open in the Chrome OS browser, or they can be set to open in any browser installed in Windows.

As for the file system, the traditional Windows Explorer and its folders are present, but those folders also link to the local storage in Chrome OS. So, anything you save to the Windows “documents” folder will be reflected locally in the Chrome OS files app. This means that if an IT administrator needs to shut down the Windows virtual machine for whatever reason, any documents a worker has saved will be preserved. And since the Chrome OS keyboard differs from the Windows layout, there’s a toolbar with quick access to important Windows shortcuts that might not be immediately obvious, like Control-Alt-Delete.

Of course, there are tons of Chromebooks out there with widely varying specs. Given what Parallels is attempting to do here, the minimum specs for using Windows on Chrome OS are pretty high. You’ll need a Chromebook with an Intel i5 or i7 processor, 16GB of RAM and 128GB of storage. That much space isn’t all necessary for running Windows, but trying to run Windows on a Chromebook with only 64GB of space could get tight in a hurry, so it’s a reasonable requirement. Parallels also simplifies things by having a list of recommended devices, including Google’s Pixelbook Go, HP’s new Elite c1030 Chromebook Enterprise, the ASUS Chromebook Flip C436FA and a handful of others.

Along with today’s Parallels for Chrome Enterprise launch, Google is announcing a handful of things it’s doing to make Chromebooks more attractive to businesses. There’s a free software tool for IT admins to install on Windows computers to run a Chrome OS “compatibility check.” It basically analyses if a user’s workflow would be conducive to switching to a Chrome OS device.

Google also announced a new “Chrome Enterprise Recommended” program to help IT departments and users alike find apps that’ll work well with Chrome OS.Finally, Google is making it easier to deploy enterprise Chromebooks to employees without IT needing to set anything up -- organizations that opt-in can have devices shipped that’ll auto-enroll in the company’s Enterprise program.

Windows is such a dominant force in big business that Windows support on Chrome OS won’t remake the enterprise landscape overnight. But on the other hand, there’s a lot of data that businesses are increasingly interested in Chrome OS thanks to less expensive hardware, easier security management and fast deployment time, among other things. John Maletis, Google’s head of product, engineering and UX for Chrome OS, told Engadget he had seen NPD data showing as much: From January through August of this year, Chrome OS device shipments increased 20 percent year-over-year, while the rest of the market was down three percent. Being able to easily keep a few key pieces of Windows software around for some users while moving a business to Chromebooks could help keep that momentum going.

In this article: google, parallels, chrome, chrome os, windows, windows virtualization, news, gear
All products recommended by Engadget are selected by our editorial team, independent of our parent company. Some of our stories include affiliate links. If you buy something through one of these links, we may earn an affiliate commission.