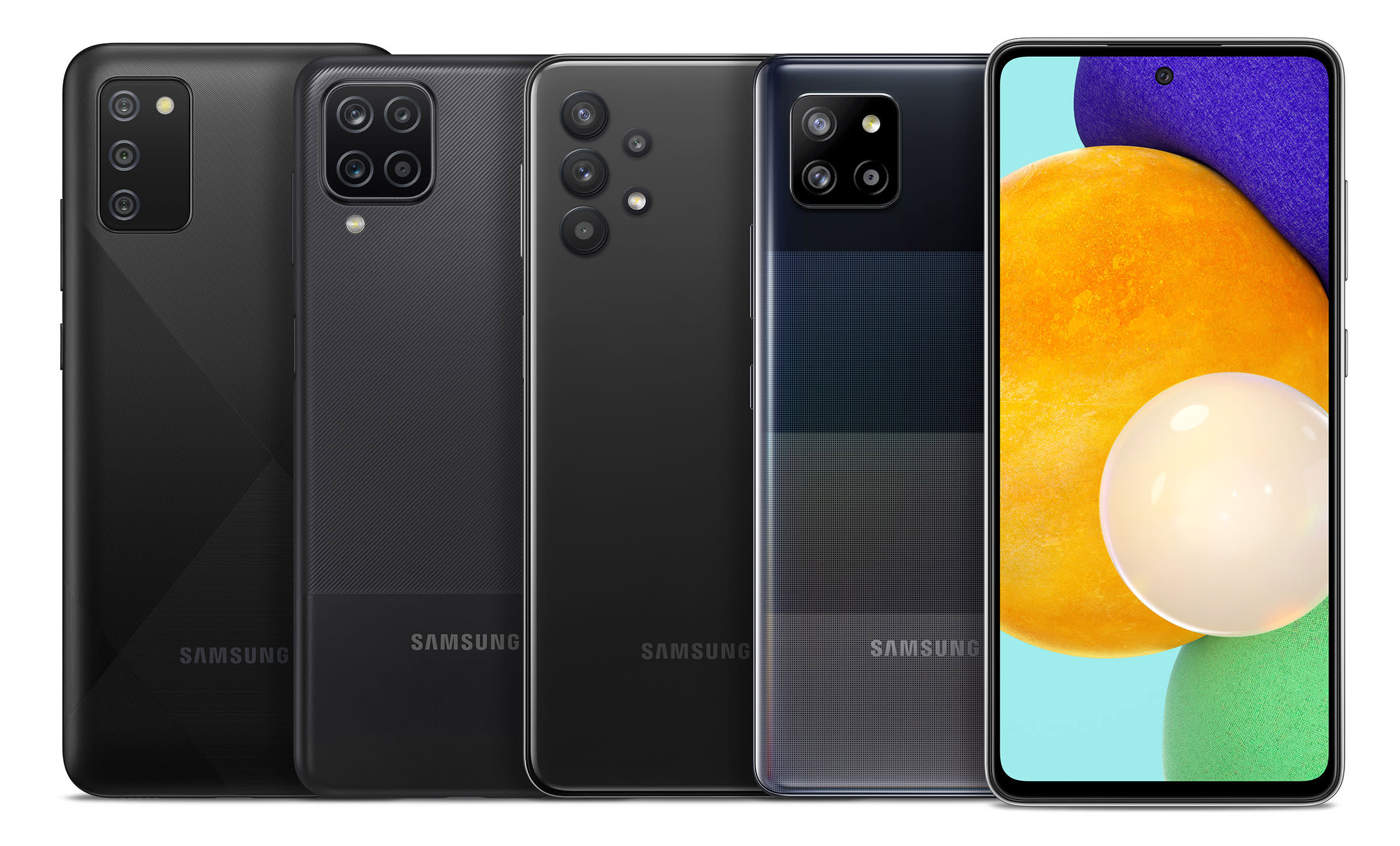 All five new smartphones go on sale this month.

Between the Galaxy S21 series and the foldables it plans to release later this year, Samsung is pretty much set with premium smartphones for 2021. For anyone who doesn’t want to drop flagship levels of cash, though, Samsung just pulled back the curtain on a bevy of new affordable models for the US, including the company’s cheapest 5G smartphone yet.

At the top of the range is the $499 Galaxy A52 5G, which Samsung talked about at length during its Galaxy Awesome launch event back in March. In case the salient details escape you, the A52 packs a 6.5-inch Super AMOLED display with a 120Hz refresh rate, a 4,500mAh battery, a quartet of rear cameras headlined by a 64-megapixel sensor, and one of Qualcomm’s relatively fresh Snapdragon 750G chipsets. As we mentioned last time, the A52 5G is in some ways a more impressive device than the LTE-only Galaxy A72 Samsung announced at the same time, which explains why Samsung didn’t bother bringing that pricier model to the US this year.

With all that said, there is one thing we’ve learned since the Galaxy A52 5G was first announced: like Samsung’s more premium models, this phone will get three years of Android updates.

The next step down from there is the Galaxy A42 5G, which pairs the same 750G chipset as its sibling with a more restrained set of specs — think 4GB of RAM instead of 6GB, a 13-megapixel front camera instead of the A52’s 32-megapixel one, and one fewer camera around back. (The A42 has a 48-megapixel main rear shooter with an f/1.8 aperture, flanked by an 8-megapixel ultra-wide and a 2-megapixel sensor for capturing depth data.) Even so, the A42 has a couple things going for it that the A52 doesn’t: it’s the only model Samsung announced today that supports mmWave 5G, and it has a slightly larger 5,000mAh battery.

Curiously, the A42 5G also has a very slightly larger display than the A52 5G does — at 6.6 inches diagonal, this notched screen is the biggest of all the displays Samsung used for its US selection of A-series phones. Of course, “biggest” hardly means “best” here, since this screen only refreshes at 60Hz and tops out at HD+ resolution.

And then there’s the A32 5G, which — at $280 — is the company’s first crack at making a truly inexpensive 5G device. Samsung managed to drive costs down by using one of MediaTek’s Dimensity 720 chipsets with 4GB of RAM and 64GB of internal storage, along with a 6.5-inch HD+ LCD screen instead of a more visually appealing AMOLED panel. (At least its refresh rate peaks at 90Hz.) Apart from that, the A32 uses the same battery and the same front and rear camera setups as the A42 does, just with one change: the A32 also packs a 5-megapixel macro camera.

Rounding out Samsung’s lineup are the A12 and A02s, which share the same 6.5-inch Infinity-V display. That’s about where the similarities end, though. The $180 A12 runs with a MediaTek P35 chipset, 3GB of RAM, and 32GB of storage, along with an 8-megapixel front camera and a rear quad camera system headlined by a 16-megapixel main sensor. Meanwhile, the $110 A02s is considerably bigger than last year’s model thanks to its whopper of a screen, but you’d do well to keep your expectations for the 13-megapixel main and 2-megapixel macros in check. Similar caution is probably warranted for the A02s’s performance too since it uses a three-year-old Snapdragon 450 chipset, but you could do much worse for price.

As usual, Samsung went a little crazy with the sheer volume of these smartphone announcements, but what else did you expect? Samsung has never been coy about how important the A-series has been to its bottom line, and as usual, it’s expecting the cheapest of its new phones the be its bestsellers when they go on sale. And speaking of which, if one of these new models managed to strike your fancy, you won’t have long to wait before claiming your own: the A42 5G will make its US debut first on April 8th, followed by the A52 5G, A32 5G and A12 on the 9th, and the A02s on April 29th.