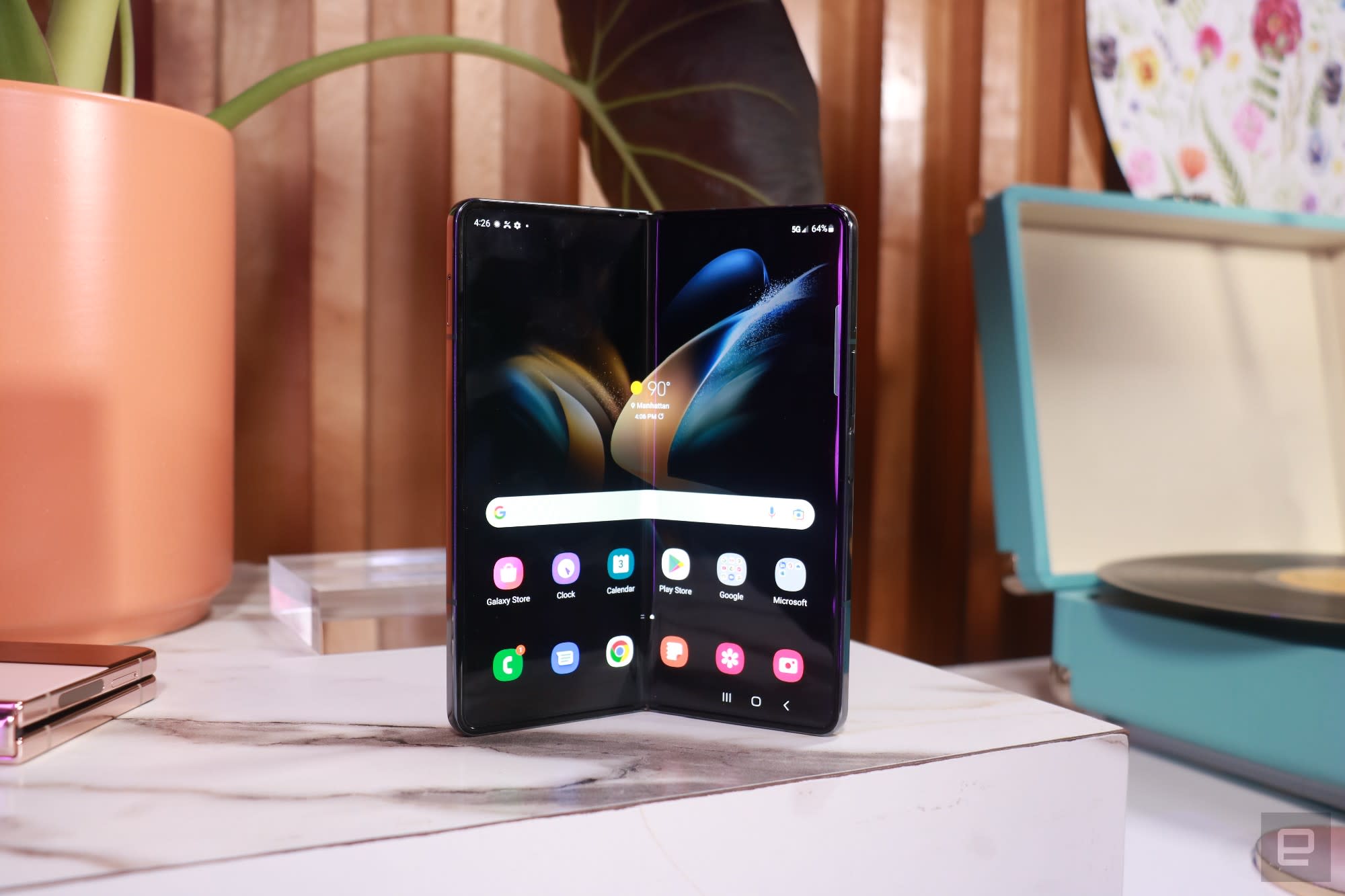 Samsung Galaxy Z Fold 4 hands-on: It's what you don't see that makes the difference

This year, Samsung’s focusing on refining the Z series, and that’s not a bad thing.

It’s hard to believe how far Samsung has come with the Galaxy Z series. Just three years ago when it launched the original Galaxy Fold, the idea of a functioning phone-tablet-hybrid with a bendable screen felt like a pipe dream. Yet, despite a rocky launch and durability issues, Samsung is today launching the fourth generation of its flagship foldable. After ironing out most of its kinks and adding fan-favorite features like S Pen support to last year’s model, the company has become the reigning king of foldables, keeping competition from companies like Motorola, Huawei and Oppo at bay.

In fact, Samsung has achieved so much with the category that it’s not surprising that this year’s updates are mostly minor hardware tweaks and software additions. The biggest differences this time are improved cameras, and Android 12L — an interface designed for larger and foldable displays.

But just because most of the changes are small doesn’t mind they’re not welcome, and many of them do bring meaningful benefits. The Fold 4 has a slightly wider aspect ratio and a stronger display panel, as well as a relocated taskbar and new touchpad interface.

From our brief hands-on at Samsung’s recent demo event in New York, I wasn’t able to tell if these tweaks will make for a substantial improvement in long-term use. But I can say that the Fold 4 feels less awkward to use in one hand, thanks to its slightly wider shape.

Its 7.6-inch internal display now has a 21.6:18 aspect ratio, compared to the Fold 3’s 22.5:18, while the external screen has a 23.1:9 format instead of last year’s 24.5:9. The difference is pretty minimal, but I felt like it was easier to stretch my thumb across the Cover Display and tap apps that would previously be slightly out of reach.

Another update that could make the Fold 4 more pleasant to use with one hand is its weight. It’s just 8 grams (or 0.28 ounces) lighter than its predecessor, and though I didn’t really notice the difference when I held a Fold 3 next to the new phone at Samsung’s event, I imagine even the littlest reduction will go a long way in the real world.

More importantly, the company said the Fold 4’s internal display is now 45 percent stronger than the last generation. This should offer greater peace of mind to those who worry about scratching their expensive foldable’s fragile panel, though from my coworker Sam Rutherford’s long-term experience with a Fold 3, it seems like you might need to be more concerned about the durability of the screen protector. Samsung told Engadget that though the material of the protector hasn’t changed, it did use stronger adhesive and improved how that’s applied. A company rep said that it “should help minimize some of the peeling issues that our users were faced with… six, seven months after launch.”

The demo units I spent hands-on time with all appeared pristine, which is to be expected, and we’ll have to wait till we have a sample for real-world testing to better evaluate the more-durable display.

Samsung said the new Fold had a slimmer hinge and bezels, but honestly, even when I placed a Fold 3 and 4 next to each other, I could barely tell that any of the borders around the internal screens were any different. Our video producer Brian Oh said it seemed like the bottom bezel on the latest device might be slightly thinner, but if the company hadn’t pointed out this tweak, neither of us would have noticed a thing.

The same goes for the Fold 4’s under-display camera (UDC), which Samsung said is better camouflaged and “less visible” thanks to a new “scatter-type subpixel arrangement.” But again, even with a side by side comparison at the hands-on, I didn’t notice any difference. The lack of discernible improvement isn’t a huge deal, though. What matters more is that, when I watched a fullscreen video on the Fold 4, I wasn’t distracted by the UDC. Samsung also said this would make for better selfies taken with the camera.

As usual, Samsung served up a gorgeous display here, with the AMOLED panels on both the inside and outside of the Fold 4 delivering sumptuous blacks and rich colors. I wish the 6.2-inch cover display was a little sharper, since it runs at a relatively low resolution of 2,316 x 904. But the company doesn’t seem to expect people to use the outer display that much, anyway.

In fact, most of the improvements to the Fold 4 are about enhancing the big-screen experience and making it better for multitasking. The most obvious change here is the relocated taskbar, which Samsung has moved to the bottom of the page instead of the sides. This takes the row of icons at the bottom of your Android home page and turns it into a Windows-esque bar that appears whenever you open an app. Go back home, and this bar goes away.

Not only can you find your recent and most frequently used apps on this row, but you’ll also see shortcuts to find all apps, return home or go back at the bottom right. You can drag and drop icons from this bar to launch apps in split-screen or full-screen views, and be able to run up to three apps side by side. Fans of Samsung’s floating Edge panel will still be able to enable it, and it’ll dock to the left or right of the display and offer additional shortcuts.

The company also updated Flex Mode, which cuts the screen into half when the phone is slightly folded, and turns the bottom part into a control panel of sorts for the top of the display. This year, Samsung added a touchpad tool so you can control a cursor up top by swiping and tapping on the bottom panel. It’s meant to make the Fold 4 feel more like a laptop when you fold it and prop it up on a table, but honestly, even in my brief hands-on session, it was just so much easier to actually tap what’s on the screen instead of trying to move a cursor over and click. This might be more useful when you’re using one hand to navigate a document, perhaps, but if you are able to poke at the screen, this touchpad feature is pretty useless.

Samsung’s also been working with developers to help third-party apps make better use of the larger canvas, and that, in addition to the fact that the Fold 4 uses Android 12L, presents a promising premise. Theoretically, the Fold 4’s interior display will feature content that’s better laid out — like a two-column notifications shade or, like Samsung showed us at its demo, resizable columns in Microsoft’s Outlook app. Unfortunately, I didn’t get to spend much time with Android 12L or even try the Outlook app during my hands-on, so I can’t judge how much more productive I’d be on the Fold 4 yet. This is also something that we can better evaluate in a review, where we’d have more time to gauge how useful small interface tweaks would be.

Other things that we’d need to test in the real world include battery life, charging, performance and camera quality. The Fold 4 has a 4,400mAh cell like its predecessor, and supports both fast wireless charging and Wireless Powershare so you can use the foldable to juice up your Galaxy Watch or Buds. It uses a Snapdragon 8+ Gen 1 chip and comes with a respectable 12GB of RAM. Also like last year’s model, the Fold 4 supports input from the S Pen Pro and S Pen Fold Edition on its inside screen.

One final area that got a serious upgrade is the Fold 4’s rear camera system. Instead of last year’s trio of 12-megapixel sensors, the new model has a 50-MP primary sensor, a 12-MP ultrawide and 10-MP telephoto camera. The UDC and selfie camera up front (where the cover display is) are the same 4-MP and 10-MP setups respectively.

With the new imaging hardware, Samsung was able to bring a combined 30x zoom to the Fold 4, thanks to a 3x optical zoom via its telephoto lens. There wasn’t a lot of room at the demo space for me to truly judge the quality of zoomed-in pictures taken with the Fold 4, but I was indeed able to get super close to somewhat distant subjects like hapless Samsung reps hovering near us. The company said it also improved its portrait mode and "nightography" to deliver clearer pictures in low light, and while it was hard to find a dim spot in our brightly lit space, the photos I took of a relatively dark corner did come out bright and crisp.

Like I said before, though, camera performance is one of the features I’d rather test in the real world. If you’re already sold on the Fold 4 though, you can already pre-order one for $1,800 from Samsung, Amazon or other retailers. It’s available in black, gray-green and an oddly boring beige color. Check out our guide to pre-ordering the Fold 4 to secure the best deals from Samsung or your preferred carrier. As always, though, I’d recommend waiting till we get a review unit to put the Fold 4 through its paces before actually buying one.

Follow all of the news from Samsung's Unpacked event right here!

All products recommended by Engadget are selected by our editorial team, independent of our parent company. Some of our stories include affiliate links. If you buy something through one of these links, we may earn an affiliate commission. All prices are correct at the time of publishing.
View All Comments
Samsung Galaxy Z Fold 4 hands-on: It's what you don't see that makes the difference