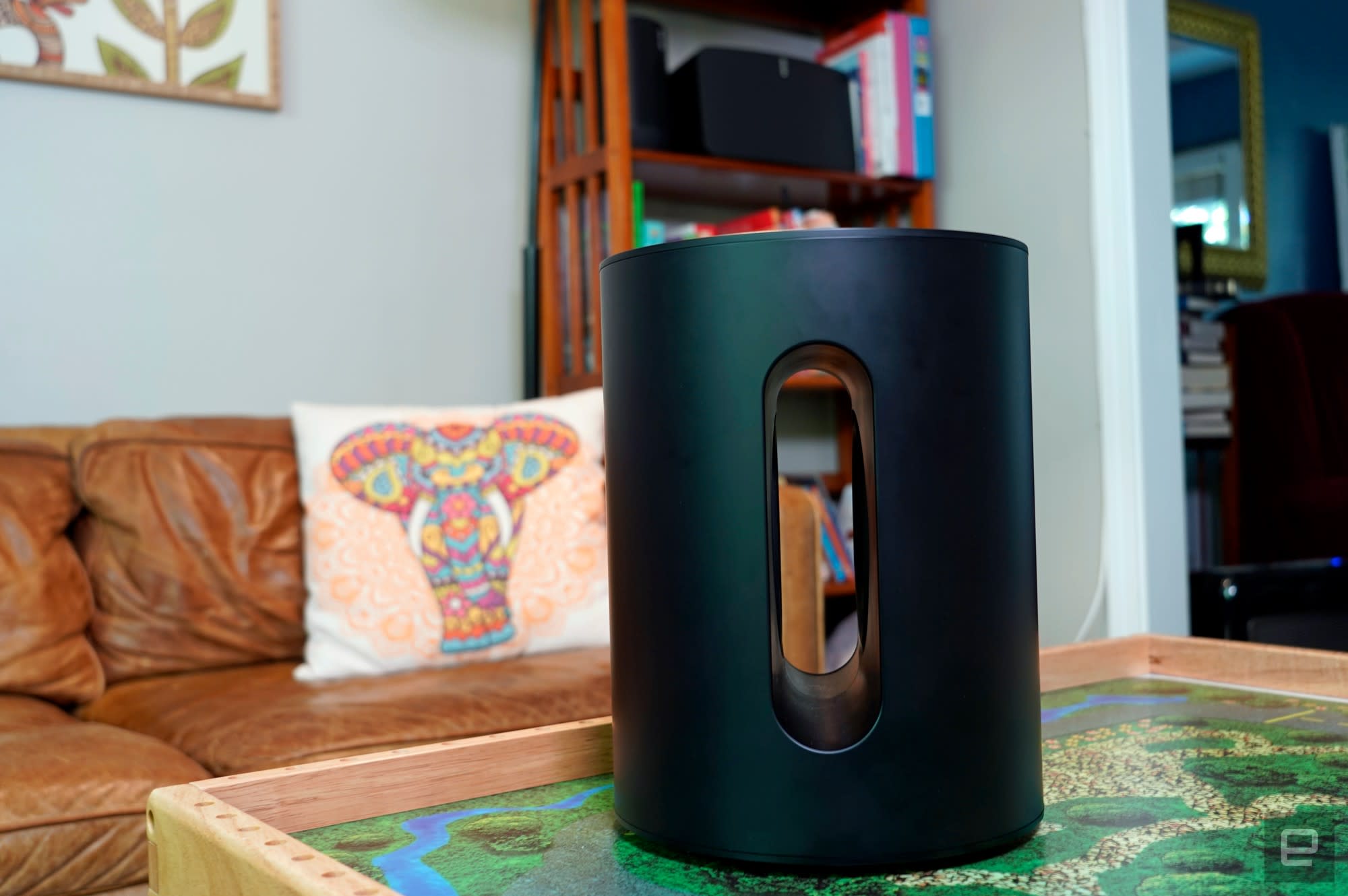 It pairs perfectly with the Sonos Beam and Ray.

Finally, Sonos has a subwoofer that's more affordable and practical for smaller spaces, the Sub Mini. It only took 10 years to get here. Sonos' original wireless Sub, which debuted in 2012, has always been targeted at its most hardcore users. With a launch price of $699, it was just as expensive as the company's flagship Playbar, and its enormous size made it overkill for apartments. (It's now $50 more after Sonos' recent price hikes.)

Casual Sonos fans were basically out of luck, especially as the company released more affordable soundbars, like the Beam and Ray. You probably wouldn't want to pair a $699 subwoofer with a speaker that costs $400 or less. Simply put, the $429 Sub Mini fills a huge gap in Sonos's lineup. But is it actually any good?

If I could, I'd show you my cat's shocked reaction as I blasted Baby Driver's opening car chase on the Sonos Arc in my family room. Sonos may not be the most price-conscious company around, but it's always made reliably great speakers. The Sub Mini is no exception.

Now I know, if you own an Arc, you'd most likely opt for the beefier Sonos Sub. But I was still impressed by how much the smaller subwoofer helped, especially for a soundbar that already delivered some fabulous low-end sound on its own. Muffled shotgun firing at the beginning of Baby Driver shook my walls (and made one cat leap into the air). I could viscerally feel the rumble of engines, the impact of car crashes and the weight shift every time Baby used the emergency brake for a sharp turn. The Sub Mini transformed the movie from something I was just watching to something I was experiencing.

I was genuinely surprised by how big the Sub Mini sounded, especially since it's a relatively small cylinder. It weighs 14 pounds — 22 pounds lighter than the big Sonos Sub — and features dual six-inch woofers that face inward. Its sealed design means it doesn't push out a ton of air like ported subs, but that also ensures a tighter bass response. The Sub Mini can reach down to 25Hz – more than enough to make the opening of Blade Runner 2049 hit me right in the gut.

While I wouldn't call it portable, I appreciated how easy it was to move the Sub Mini around my home to test in different rooms. (Trust me, that was a lot less fun with the massive Sonos Sub.) You can pair the new sub with Sonos’ powered speakers, like the Beam, Ray and Play:5. Unfortunately, it doesn't work with Sonos's portable offerings.

That makes sense for the tiny Roam speaker, but I was genuinely disappointed to learn the Sub Mini doesn't support the larger Move. That's a speaker I've grown to love recently, since it lets me easily bring music into my backyard. It's a shame Sonos couldn't make the Sub Mini work while the Move was sitting on its charging base. (At that point, how is it different from a speaker with a plug?)

Despite that annoyance, the Sub Mini seems well-suited to homes with plenty of Sonos speakers. Moving it over to a Play:5 in my living room took around 30 seconds. And once it got going, it instantly added an impressive amount of depth to some of my usual test tracks. Tan Dun's "Night Fight" from the Crouching Tiger, Hidden Dragon soundtrack sounded like I was hosting a traditional drumming concert in my home. Flying Lotus's "Zodiac Shit," a go-to track for low-end testing, sent another one of my cats cowering into another room.

As great as it is for music, I'd best most Sub Mini buyers would end up pairing it with one of Sonos's soundbar for better movie and TV sound. It certainly made a huge difference on the first-gen Beam in my bedroom, which sounded twice as large during that Baby Driver chase sequence. Obviously, that's not a room where I would want to have thumping bass all the time, but it sure is nice to have the option.

That's my biggest takeaway. After a decade of waiting, Sonos fans finally have a viable option for beefing up their sound that isn’t obscenely expensive. And if you're lucky enough to have multiple Sonos devices, you can easily move that bass magic all over your home. It may be called the Sub Mini, but really it’s all about maximizing sound where it matters.

All products recommended by Engadget are selected by our editorial team, independent of our parent company. Some of our stories include affiliate links. If you buy something through one of these links, we may earn an affiliate commission. All prices are correct at the time of publishing.
View All Comments
Sonos Sub Mini review: The practical sub we’ve been waiting for
Sonos
gear
subwoofer
Sub Mini
entertainment
review