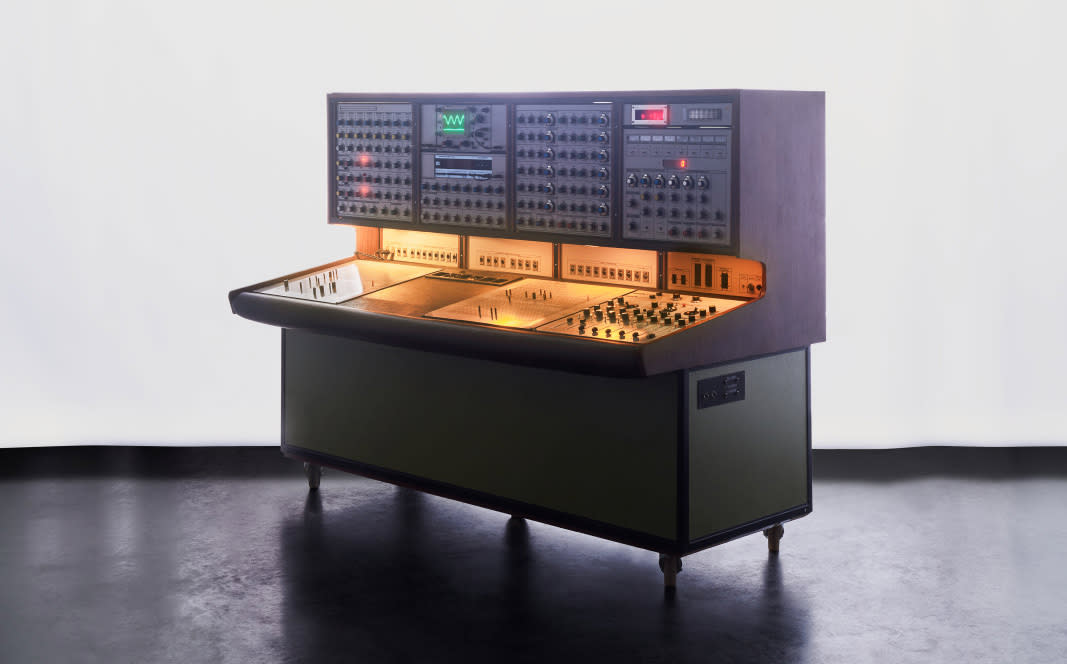 Soulwax and the hunt for the EMS Synthi 100

The super-rare synth was hiding on their doorstep all along.

Stephen and David Dewaele (AKA Soulwax or 2manydjs), are known for their contemporary use of vintage sounds. On stage, their performances regularly include classics such as the ARP 2600 and the EMS AKS synthesizers. But one synth  -- the EMS Synthi 100 -- has been on their wish list for years, but has proven almost impossible to pin down. Not surprising, really, given that only 31 units were ever made. In the four decades since its creation, several simply disappeared off the face of the earth, others fell into disrepair, and the few that remained in working order were locked up in private collections.

The EMS Synthi 100, then, is Soulwax’s whitest whale. But unbeknown to the brothers, unit #30 had been sitting just walking distance from their studio for years. Fortunately, a twist of fate would mean the Synthi 100 would take residence in their studio long enough to make an album. That album has just been released, and the complexity of the synth itself, along with the journey to find one, are all baked into the record’s 35-minute peregrination through the Synthi 100s capabilities.

“I actually tried to buy it off them first, but it was very clear that wasn't an option.“ David Dewaele told Engadget. “Them” being the Institute for Psychoacoustics and Electronic Music (IPEM) in his hometown, Ghent. IPEM describes itself as a “research center in systematic musicology.” Where it acquired the Synthi 100 is unclear, but Dewaele suggests that -- at least in recent years -- it wasn’t getting much use. “It was brought out once a year to show the students of musicology how you make a sound with a synthesizer from scratch” he said.

The EMS Synthi 100’s story is intertwined with vintage rock folklore. Current owners are believed to include Pete Townshend and Billy Corgan. Bowie was known to have dabbled. The synth itself is the product of Peter Zinovieff, a British engineer who was already influential in the ‘60s progressive rock movement thanks to the acclaimed VCS3 synthesizer under his Electronic Music Studios (EMS) brand. While the VCS3 looks like a prop from a ‘50s sci-fi movie, the Synthi 100 would be the whole movie set. It’s a beast of a thing, comprising several intimidating sections, with rotary dials, switches and the centerpiece: two 60 x 60 patchbays.

Zinovieff was an advocate for futurism in music, and a contemporary (and former “band mate”) of Delia Derbyshire (of Doctor Who theme tune fame). “When I go to sleep, I think of ways of producing sounds. Then I spend most of the next day trying to get the computer to obey my nebulous thoughts.” Zinovieff told the Guardian in 2015.

When the Synthi 100 was conceived, there wasn’t a set format for synthesisers, and many other “experimental” pieces of gear were influencing the music of the time. Even then, though, the Synthi 100 stood out. Literally. It looks more like a cold war nuclear control desk or something that a Bond-villain would sit at to initiate world domination. On an unmodified unit, you won’t find a keyboard, anything resembling a display (bar an oscilloscope), or even an obvious way to interact with it.

“When Eno was using the Synthi AKS with Bowie or even on his own records or with Roxy [Music], it was mainly either as an effect unit -- so you would run guitars or vocals through it --  or as a synth that would play in conventional sounds over a band.” Dewaele said, in reference to the smaller, “portable” EMS synth that was already in their repertoire.

While the AKS had been a staple of Soulwax’s studio for years, the hunt for a Synthi 100 had ground to a halt. They almost bought one in Canada in the aughts, but that fell through and the Dewaele brothers almost gave up hope of finding one at all. So when they discovered there was one right in their hometown, they couldn’t believe it. But it was still locked away in a University that was unlikely to want to part with it.

Fortunately for them, IPEM was about to change facilities, meaning #30 would need a temporary home. After seeing the Dewaele brothers’ beaming enthusiasm for the synth (and well-kept local studio), having them take care of it seemed like the perfect solution. And for 12 months? That’s just enough time to make an album with it.

But the Dewaele brothers didn’t want to use it as an abstract effect, modulating other sounds. They wanted to make something musical: An album -- beats, bass, pads and all -- created entirely on the Synthi 100. Which is precisely what they did, Deewee Sessions is the result of their time with #30 and every single sound on the album comes from that machine. Albeit with a little help from modern technology.

“I guess sort of the point of the album was to showcase what we think are the characteristics of the machine” said Dewaele. The album is made up of six “movements,” three per side of the vinyl release. Movement 1 starts with a simple pulse tone. It’s exactly the first sound you imagine would come out of such a machine, electronic, pure, almost sinister. But it doesn’t take long before that tone starts to waver and dissolve into a cacophony of metallic, haunting and then soothing, throbbing sounds. The album is the sonic equivalent of shining light through a prism -- one sound seemingly contains all the sounds.

If you’re familiar with Soulwax’s more electronic-led music (Nite Versions, for example), you’ll soon recognize their trademark earthy-futuristic sound. The first two movements of the album feel like a nod to the Synthi 100’s prog-rock legacy, with a more abstract edge to them. Movement 3, however, is when moody, plodding basslines start to emerge, and something resembling a rhythm. Side B starts with another melodic breather for Movements 4 and 5, before the Dewaele brothers return to their higher-energy roots for the last, thumping, head-swirling act.

It would be bold to say that Deewee Sessions will be the last record to showcase the Synthi 100, but it almost certainly will be the last one entirely made with it -- the remaining specimens are dying. “Sort of living? We only know of about 14 or 15.” Dewaele said. And he should know after having been looking for one for at least the last 25 years. As he tells it, many ended up in similar institutions to IPEM, and for a while were not considered important or valuable and may have found their way into landfill. “It's quite surprising that half of them are still around.”

Even the one they made the album with, #30, wasn’t fully working. Dewaele guessed at it being 75-percent functional when it arrived at their studio. Fortunately, IPEM had a staff member that cared deeply for it, and was overseeing its glacial restoration. A process that would continue during its relocation. “He actually has an exact replica of the machine and even slotted the circuit boards in there, and could not get it to work.” Dewaele said.

Given that Dewaele estimates there are over 7,000 combinations on the patchbay (that pipes signals between different components), and not everything was working, adopting the experimental spirit of the Synthi 100 wasn’t just nostalgic, it was essential to get anything done. “[The restoration problem] was actually a blessing in disguise, because what that opened up to us was like okay well knowing that doesn't work, why don't we really do what Peter Zinoviath imagined? Which is why don't we use modern technology.”

So that’s what they did. David and Stephen paired the Synthi 100 with gear from Expert Sleepers, a company that specializes in hardware and software that allows old synthesizers to be controlled by modern PCs. “So you keep the sound and the idiosyncrasies of the machine, but it allows you to do it much more” according to Dewaele.

Purists might be aghast that any modern equipment could be allowed in such a project, but Dewaele makes the case that this is actually more inline with the Synthi 100’s futurist vision. For all its vintage feel, the Synthi 100 is technically a hybrid analog/digital system. Zinovieff essentially added a computer to it, albeit an incredibly basic one by today’s standards. But despite the brothers’ future-forward approach, it was an anachronism too far for Zinovieff.

The brothers were keen to speak to the synth’s spiritual father, but it didn’t go as planned. “I guess, not surprisingly, Peter Zenoviath had no interest in revisiting the synth 100 or anything of the EMS stuff” Dewaele said. “Because there's so much more we can do with computers right now. He's an 80-something-year-old, still making avant garde computer music.”

And here is where the two worlds combine (or compete?). On the one hand, there’s a mini revival going on with the Synthi 100. “It's cool because since we started making the album, there's been a little bit of a zeitgeist thing where there's one in Melbourne, there's one in Athens, there's one in Belgrade, and they've all had recent restorations.” Dewaele added. “And they're now in contact with all these people. So it's now become a lot more part of their repertoire, more than it was in 2016.”

But not everyone has access to one of, maybe 15 super rare, bulky, barely-working synths. Which is perhaps why we’re seeing elements from machines from this era pop up in modern, affordable gear. Teenage Engineering’s Modular series is a clear tribute to the category. While companies like Behringer are making straight up clones of vintage gear.

Then, of course, there’s the myriad software synths that live inside programs like Logic or Ableton Live. Many of these aim to replicate the vintage sounds of yore (to varying degrees of success it must be said). “All these companies, like Native Instruments and Arturia, even Moog or Roland, all they're doing is referring back to these classic machines. So in a way he [Zinovieff] was right.”

So, with their lust for the Synthi 100 sated and the album released, that’s that, right? Not so much. The brothers returned the synth to IPEM as agreed, but that left a (literal) huge hole in their studio, and what’s a gear loving band going to do? “It's funny because there is a specific space in our recording area, just behind some acoustic panel, where the EMS Synthi 100 fits exactly, fits perfectly. And that has been filled with a Yamaha EX1, which is this weird, it's not even an organ, it's like a weird organ synth they made.” Dewaele noted. “I don't think we'll be making an album similar to the Synthi 100 with it, but it's an equally imposing big machine.”