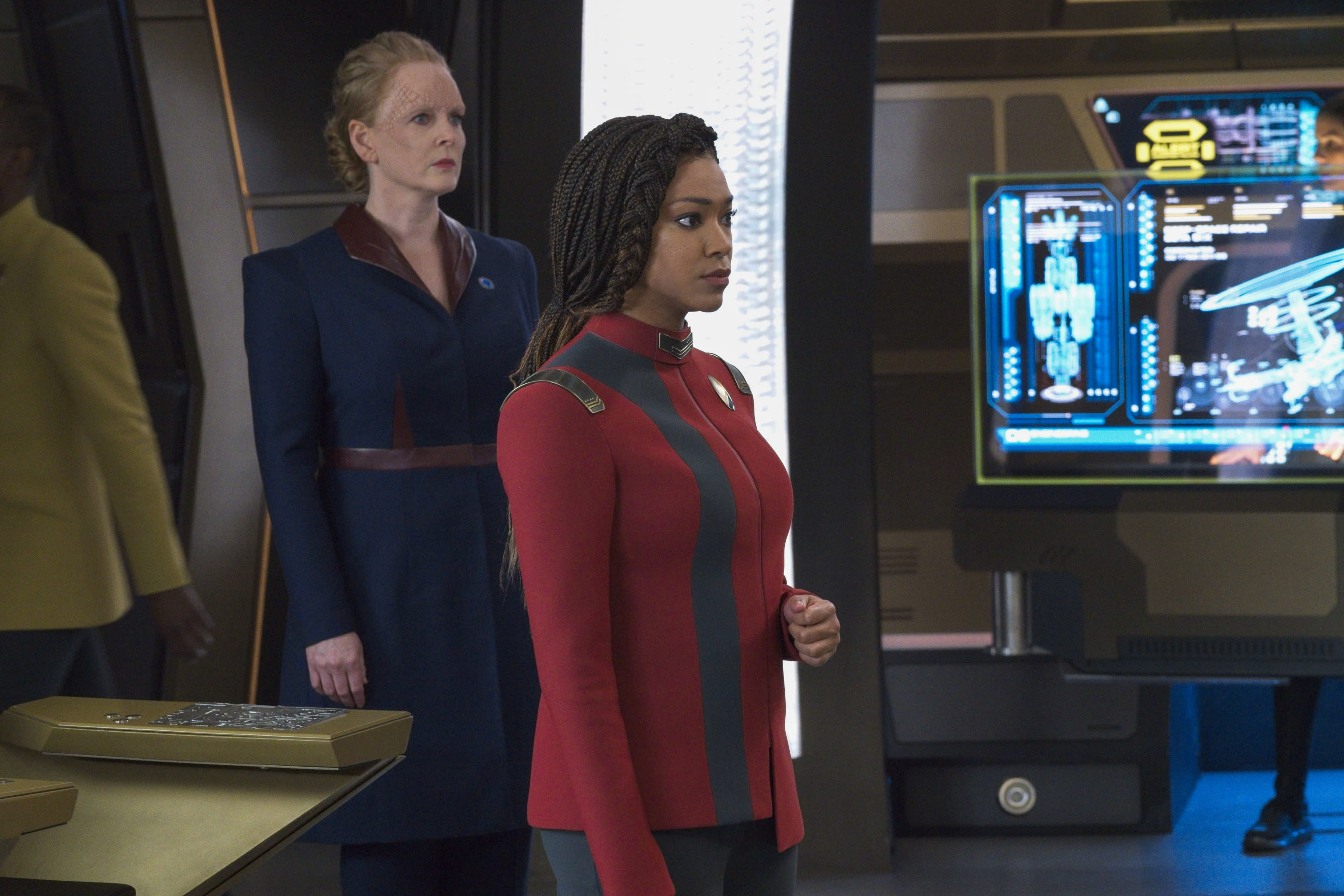 After four seasons, 'Discovery' still isn’t interested in being a “normal” Star Trek

It is the Michael Burnham show, after all.

The following only contains slight spoilers for the first episode of season four of 'Star Trek: Discovery.'

Since its debut back in 2017 (and even before then, really), Star Trek: Discovery has been a divisive show. There was a long laundry list of complaints: the series is too dark, everyone is mean, everyone cries too much, the Klingon designs suck, it shouldn’t be set before the original series, Michael Burnham is an unlikeable main character. While some changes have been made to the show over the years to smooth these rough edges, the elevation of Michael Burnham to the captain’s chair for season four has made it clear that Discovery is still largely going to do its own thing, regardless of what the fandom thinks.

In the past, season four for Star Trek series has always been a turning point, the moment when a show finally figures out what it wants to be. Season four of The Next Generation started with the riveting “The Best of Both Worlds,” and produced a number of classic episodes like “Family,” “Clues” and “The Drumhead.” Deep Space Nine added Worf to its crew in its fourth year, while Voyager got Seven of Nine. Enterprise’s final season is generally considered its best. So fans were curious to see if the pattern would continue in the Kurtzman era of Trek.

Things certainly looked promising at the end of last season. The crew of Discovery had jumped 900 years into the future, to a galaxy where dilithium fuel for space travel was in short supply and the Federation was in tatters thanks to an event known as “The Burn.” Burnham and the rest of the Discovery crew figured out the source of the disaster and solved the problem in last year’s finale, opening the doors to a show dedicated to rebuilding the Federation and its ideals. After three seasons of war, it finally looked like the USS Discovery could finally get down to Starfleet’s long-stated mandates of science and exploration.

Season four begins five months after the previous episode, with the Federation now in high gear reaching out to old members and allies. That’s where we join the USS Discovery, as Burnham and Cleveland Booker are attempting to give a shipment of dilithium to a species new to the Star Trek audience. The mission quickly goes awry, strongly reminiscent of the madcap opening of Star Trek Into Darkness.

The parallels to the weakest of the three Abrams-era films are not entirely an accident or even a homage: both Into Darkness and this week’s season premiere were co-penned by Star Trek head Alex Kurtzman. They exhibit some of the excesses of modern Trek like an emphasis on frantic action and quippy dialogue — at least there’s less lens flare this time around. And everyone seems to be in a good mood, a contrast to when everyone was just worn down in the 23rd century by years of war and secret experiments.

The season opener is largely dedicated to showing off a new optimistic status quo, with Starfleet Academy being reestablished, Booker traveling to attend his nephew’s coming-of-age ritual and a new Federation president getting sworn in. It all seems rather staid, but Star Trek has always had its share of pomp and circumstance so it was actually a nice change of pace for the program. But things do go awry when the Discovery is tasked with rescuing a station crew and have to make a few hard choices, thus the title of the episode: “Kobayashi Maru.”

For those unfamiliar with Star Trek lore, the Kobayashi Maru is a test that all command-track cadets must take at Starfleet Academy. In the simulation, the cadets are faced with the choice of rescuing a ship stranded in enemy territory. To cross the border to rescue the craft is to risk war, but to preserve peace means to consign that crew to death. It’s been called a “no win” scenario,” and the Academy is interested in how a cadet reacts to it rather than the actual outcome. Kirk is known as the only person to have actually beaten it, because he reprogrammed the scenario; he cheated.

Like Kirk, Michael Burnham also doesn’t believe in the no-win scenario. She always does what she feels is best, and it’s made her crew unfailingly loyal to her over the past few seasons. But it’s earned her a share of detractors off-screen, because Burnham often disobeys orders and ignores good advice. She’s the rebel cop who plays by their own rules. Except this is Star Trek, a franchise about teamwork. Michael’s actions — and the fact that they always succeed — often undermine her superiors and even her own crewmates.

Placing her in the captain’s chair should have alleviated some of this issue, since Burnham is now the one her crew has to listen to. But even then the show felt it needed some sort of conflict, bringing the Federation president along to question Michael’s judgment in front of her crew. I couldn’t help but be reminded of how before the show aired, the producers and writers were bragging about how they were going to break one of Gene Roddenberry’s key rules for the series: No inter-crew conflict. Watching that in action in this episode, however, was mildly uncomfortable and even a little embarrassing to see.

Not everything is rosy by the end of the adventure, but it’s still a better outcome than we’ve seen at the end of many Star Trek outings. But the new “happy” status quo is thrown out the door by an anomaly at the end of the episode. As seen in previews, this anomaly will be an ongoing concern for the USS Discovery and the entire Federation — not just as a threat to life, but as a threat to the Federation’s efforts to pull itself back together.

Unfortunately, this also means that Discovery won’t be doing a lot of discovering in its fourth season. Fans who love “planet of the week” adventures and were hoping for the show to embrace that format will come away disappointed for now. However, while episodes one and two are involved in setup for the ongoing anomaly plot line, episodes three and four still make room for some vaguely one-shot adventures, albeit ones designed to further character development.

But while Discovery doesn’t seem all that interested in changing how it does things, the environment around it has changed. It’s no longer the only Star Trek show on TV, thanks to the premieres of Picard and Lower Decks in 2020, last month’s kid-oriented Prodigy and the debut of Strange New Worlds next year. All of these shows tackle the Star Trek universe in their own way, and are not required viewing to understand what’s happening in other shows (though there are some references to Picard in the first episodes of Discovery). Viewers can choose the Trek that suits them best, removing the pressure from Discovery to be all things to all fans and making it even easier to just do its own thing.