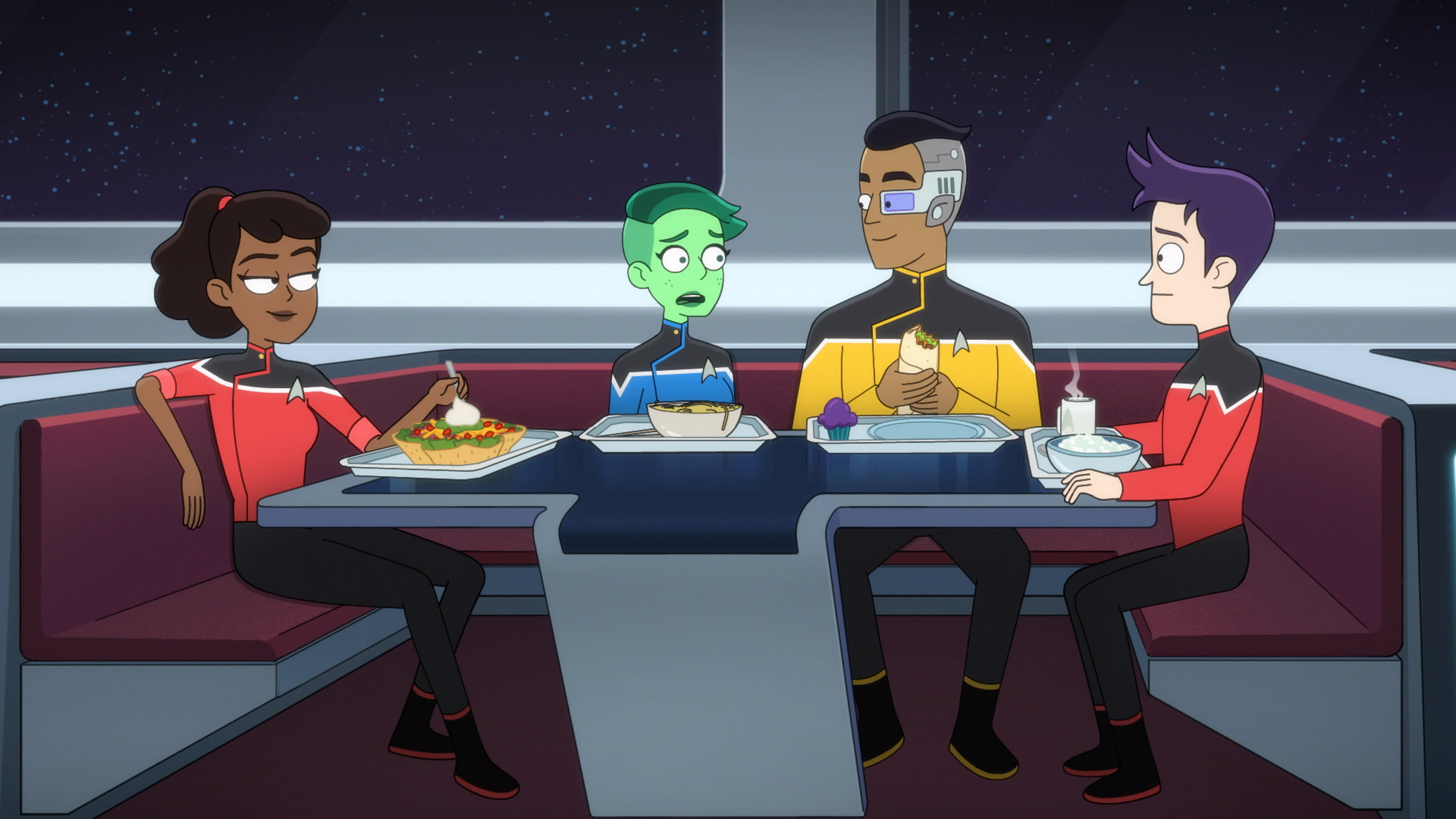 ‘Star Trek: Lower Decks’ is ready to let its ensign heroes rank up

Brad Boimler deserves better than to be the next Harry Kim.

Throughout the history of Star Trek, it’s generally accepted that a member of Starfleet will spend about three years as an ensign, the lowest officer rank in the fleet. It’s the position given to new Starfleet Academy graduates, and the status of the four protagonists on Lower Decks. However, as the show wraps up its second season and prepares for a third, it does bring the character’s status as “lowly ensigns” into doubt. This week’s episode touches on, though doesn’t solve, the problem by exploring the universal concept of a “lower decker.”

In “wej Duj” (the first full Klingon language episode title in the entire franchise), the USS Cerritos is in transit between missions, giving the crew some much-needed downtime. Mariner, Rutherford and Tendi use their day off to spend some personal time with senior officers, which sends the bridge-crew-friendless Boimler into a panic since he notes that this will give them an edge when it comes to getting promoted. He spends most of the episode trying and failing to get buddy-buddy with various officers. If this all feels like C-plot level shenanigans, well, it is. But as a result the show takes its biggest leap yet to fill out its narrative in this episode.

“wej Duj” is Klingon for “three ships,” and we get to see the crew of the Klingon vessel Che’Ta’, where a very ambitious Boimler-esque Klingon is trying to get in good with the current captain of his ship. Old school fans will remember that authority on Klingon ships is assigned by force, with an officer assuming command by killing the previous captain. Ma'ah isn’t quite that ambitious, but he’s perfectly happy to walk the captain’s pet targ if it helps him become first officer.

The episode also shows us the happenings on a nearby Vulcan craft called Sh’Vhal, where a lower decker named T’Lyn there has been messing with the sensors and as a result, notices some strange readings in the area that she takes to the captain to investigate. The captain agrees to the search, but he also reprimands her for undertaking such unnecessary adjustments to the ship.

The entire episode could have been played as a “slice of life,” with the three plot lines never intersecting and it still would have been a fairly successful installment of the series. This isn’t our first look at the internal life of a Klingon ship, but it is our first look at a Vulcan crew, and playing those distinct societies against Starfleet culture is a great bit of world building. Star Trek has never been good about showing life outside Starfleet, only lightly touching on the grander world in more recent shows like Picard and Prodigy. And even those still have tenuous Starfleet connections. Lower Decks has relished showing us the larger universe that the characters exist in, and here we now get that same sense of expansion without the Starfleet worldview intruding.

That doesn’t mean the storylines stand apart, far from it. All three ships and their plot lines come together in the end, not only pulling the episode into one cohesive narrative, but also continuing — and starting to resolve — a plot line that has lingered since the end of season one, namely the Pakleds. We finally find out why they suddenly became a huge threat in the Alpha Quadrant, thanks to a series of machinations reminiscent of storylines on The Next Generation and Deep Space Nine. Not everything is revolved by the end, presumably leading into a big finale next week. It’s fair to say that seasons one and two basically comprise one full story arc, with season three possibly presenting a fresh slate.

And it’s just in time, too. Each season has represented a year on the Cerritos. Next season will mark three years on the Cerritos for Boimler, Tendi and Rutherford, placing them in line for a promotion. And unlike Mariner’s purposeful self-sabotage, her friends have all shown themselves to be competent, trustworthy officers. There’s no reason they shouldn’t be promoted — and technically Brad Boimler already was at the end of last season, having only been demoted and sent back to the Cerritos because of a transporter accident on the USS Titan.

While it’s unlikely (though not impossible) that the characters will get promoted in the season finale, it will have to happen some time next year for the show to maintain its verisimilitude in Star Trek canon. The Cerritos doesn’t have the luxury of being trapped in the Delta Quadrant as an excuse to keep its ensign an ensign (poor Harry Kim). But there’s hope, given what happens to our Klingon and Vulcan lower deckers by the end of “wej Duj.” Those outcomes, alongside the episode wrapping on Brad giving sage advice to a young crewman, seem to hint that the show is comfortable with letting our protagonists move on when it’s time.