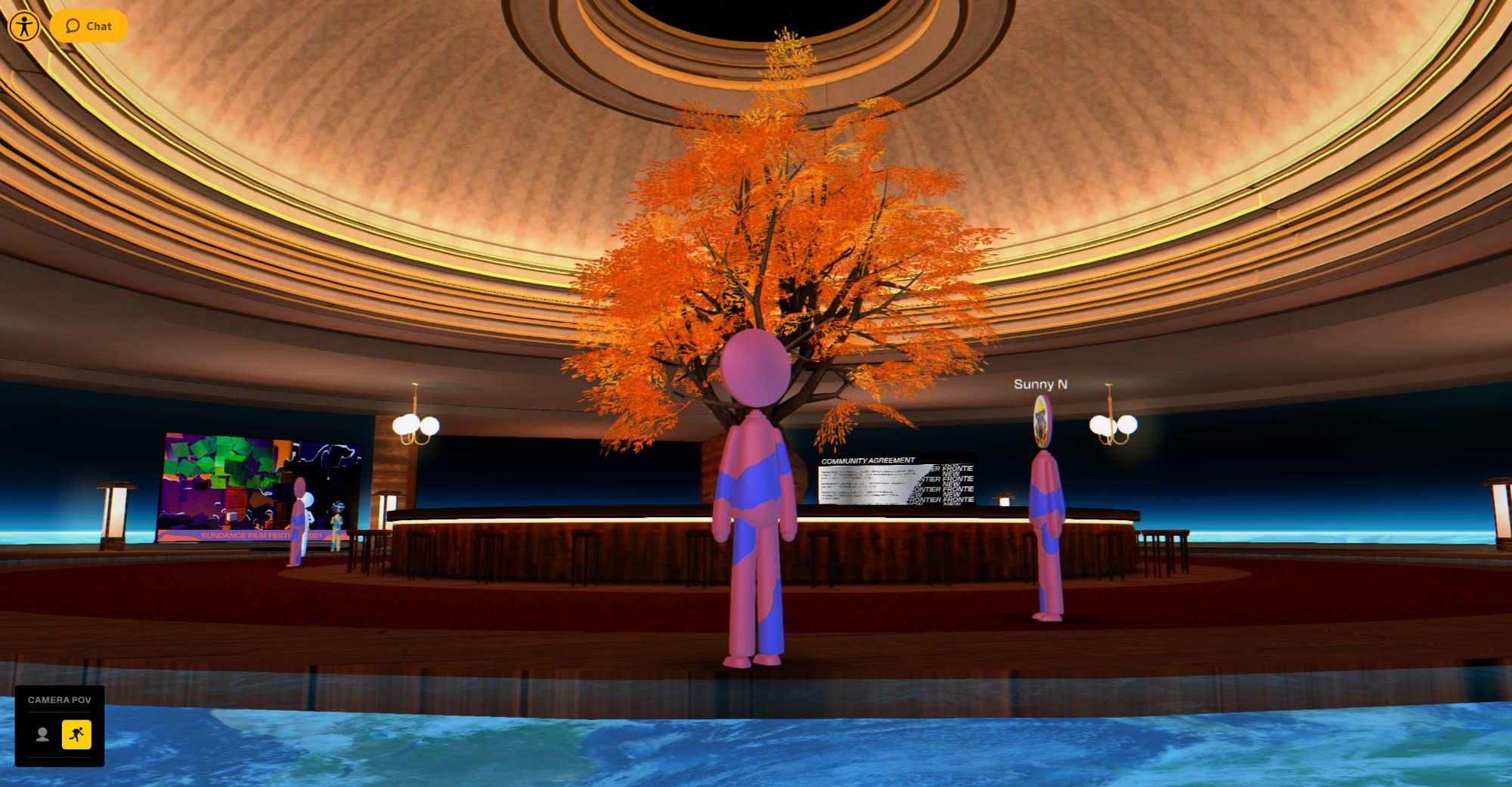 The legendary film fest is going virtual in more ways than one.

Like most major events over the last year, the esteemed Sundance Film Festival is going virtual. But it's going beyond just letting you watch films at home. Sundance is building an extensive virtual reality platform for all attendees, which can be accessed with or without a VR headset. You can think of it as an evolution of the festival's experience highlighting groundbreaking VR and new media projects with its New Frontier exhibition. Now, Sundance is transforming itself into a virtual reality destination.

"Having our hand forced to build a virtual solution to present New Frontier solved so many problems we were having and struggling with on the ground," Shari Frilot, Sundance's New Frontier curator and senior programmer, said in an interview with Engadget. "This is the exciting part. This is a life raft that ended up being the Cadillac we'll be driving into the future."

Anyone can access Sundance's VR platform by picking up a $25 Explorer Pass (or one of the festival's more premium passes), and logging onto a website. On a typical computer, it just looks like you're stepping into a cinephile version of Second Life. But slap on a headset like the Oculus Quest, or any number of PC-powered VR solutions, and you'll be launched into an immersive WebXR experience. To build its custom platform, Sundance worked together with the creative studio Active Theory, whose AR work was featured at Google I/O.

When I demoed an early version of the platform while wearing an Oculus Quest 2, I found myself standing in a space garden floating above the Earth, the stars all around me. Rather than recreate the Salt Lake City festival experience, Sundance aimed to capture the global experience of cinema. And just like a normal festival, there's a cocktail space -- the Film Party room -- for you to chat with nearby attendees.

The VR avatars are basic, with simple arms and legs, along with bulbous heads. But those tuning in from PCs can also flip on their webcams, which fills their avatar's heads with a live video feed. That's how I ended up chatting with Frilot for an hour -- it was no replacement for a post-screening gabfest, but it was still more engaging than a Zoom call. All of the VR rooms have spaces to sit and hang out with friends, or just watch some short clips on huge virtual screens.

Unfortunately, Sundance isn't making its entire slate of films and documentaries viewable in VR. But attendees will still be able to watch five special features in the Cinema House, a fully realized VR theater. There's no chat functionality there (if only we could mute theater-goers in real life), but you can still grab a seat with a friend to enjoy the show. It's one area I hope Sundance expands on in the future. Being able to watch a screening in your living room is convenient and all, but watching it in VR better replicates the immersion of a real theater.

Over at the New Frontier Gallery, every VR/AR/mixed media exhibition was on display like a work of art. Stepping up to an individual piece brings up an explanation as well as the requirements for viewing them. Some experiences, like 4 Feet High VR, which explores the high school sexual awakening of a wheelchair user, are only accessible with headsets. But plenty of others, like the meditative 7 Sounds, can be accessed with a pair of headphones.

If you're visiting the New Frontier Gallery in VR, you can also peer over its walls to see the Earth rotating beneath you. And as an Easter Egg, you can hop over to the International Space Station in the distance. There you can view Space Explorers: The ISS Experience, which was developed by the VR studio Felix & Paul.

Overall, Sundance has 14 New Frontier exhibitions this year. That's less than half that appeared last year, a sign that some creators aren't ready to embrace a virtual festival. For viewers, though, the VR platform goes a long way towards making Sundance more accessible.

Normally, if you're lucky enough to snag a festival pass, you'd have to fly out to Salt Lake City in the dead of winter, find an overpriced spot to stay, and spend a week dealing with lines, sold out screenings and bitter cold. As America's largest independent film festival, Sundance has enough elite cachet to attract audiences despite its unwelcoming setting. But now that nobody should be traveling or gathering indoors, the festival is exploring new ways of celebrating film. For once, it’s something anyone in the world can enjoy, without dealing with the expense or accessibility issues of a crowded festival.

"We're doing this whole thing as a grand experiment -- [in terms of] how we're presenting the films, and how we're presenting New Frontier," Frilot said. And while the physical Sundance celebration will likely return once the pandemic ends, she believes there's still a role for a VR platform, especially when it comes to the New Frontier Exhibit: "I can't imagine going backwards from this."