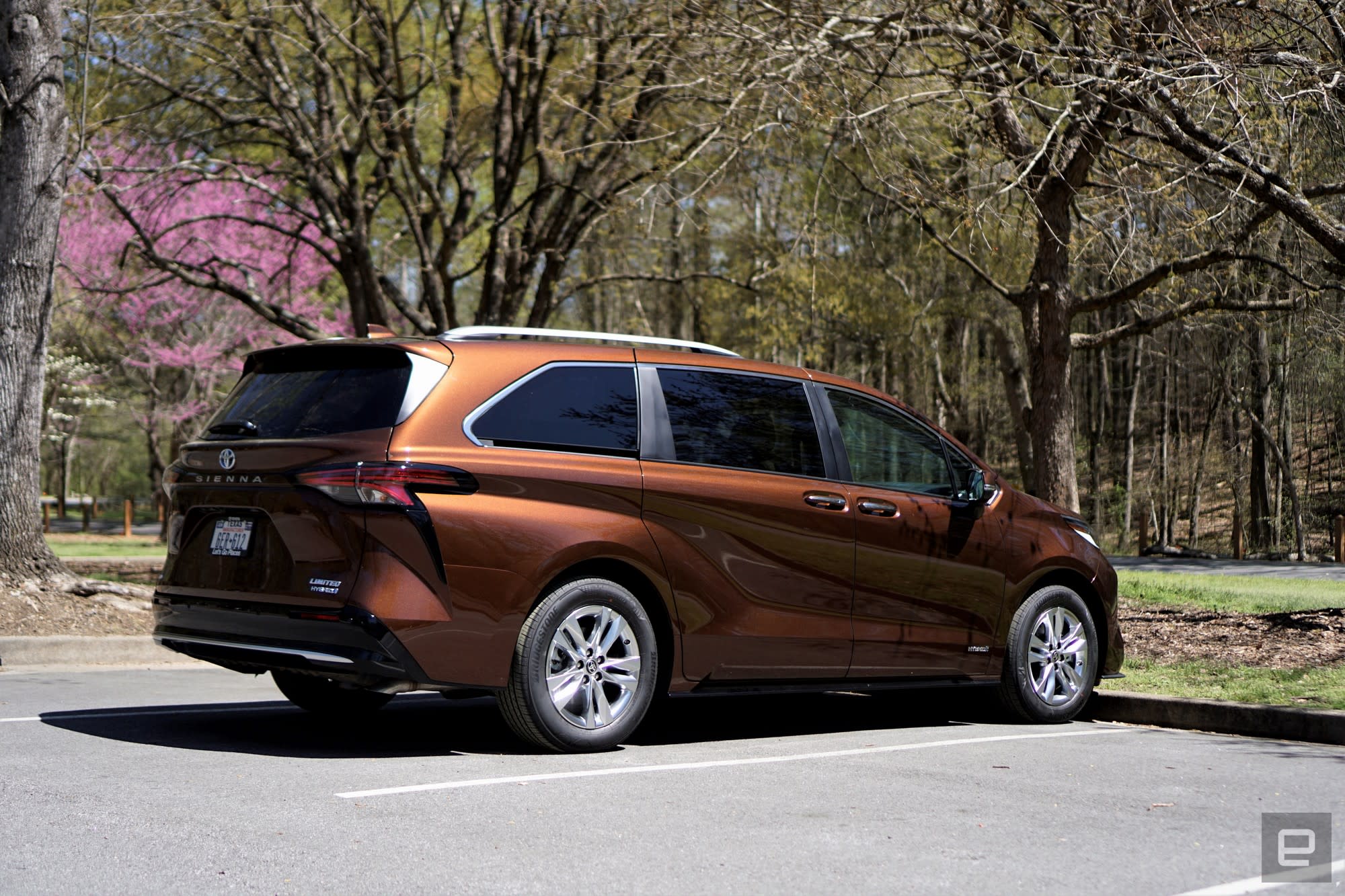 It's pretty much the perfect car for parents.

There comes a time in your life when minivans just make sense. Usually, that's when you start to learn about the nuances of car seats, strollers and all of the other gear kids require. Then come the soccer matches and cacouphonous carpools. I won't waste time arguing for the practicality of minivans, because no matter how you frame it, they'll always be better for a typical family than an SUV or crossover. They have got more room for passengers and cargo alike, and they're just easier to access when you need to secure a screaming toddler.

No matter how much sense they make, though, minivans still suffer from being seen as boring vehicles for soccer moms and dads who've just given up. That's an idea Toyota is trying to obliterate with its 2021 Sienna. Its sporty styling evokes Toyota's more adventurous SUVs, and it has all of the latest infotainment amenities to please both parents and kids. Most importantly, though, every 2021 Sienna is a hybrid offering at least 35 MPG of combined mileage (the entry-level LE trim is rated at 36 MPG). And with a starting price of $34,460, it's around $4,000 less than Toyota’s 2021 Hybrid Highlander, which offers the same mileage but with more limited seating space.

By cramming so much tech into the 2021 Sienna at a low price, Toyota is clearly gunning for Honda's ever-popular Odyssey, and Chrysler's Pacifica plug-in hybrid. The Pacifica offers up to 32 miles of electric-only range, making it ideal for families who don't need to travel far very often. But it also costs a lot more than the Sienna, starting at $40,620 for the base model. Additionally, Toyota managed to fit its AWD hybrid system into the Sienna, whereas the Pacifica and Odyssey only offers front-wheel drive. (Another major knock against Honda: there's still no hybrid Odyssey!)

Based on its sheer style alone, the 2021 Sienna clearly has a lot more going on than the Pacifica. (There's a reason Toyota has jokingly labeled it a "swagger wagon.") The sharp lines and large grille along its front gives off an aggressive vibe, as if it's more eager to hit the racetrack than putter over to a soccer match. And that style continues along the side panels, making the Sienna seem like it's speeding down the highway even when it's standing still. Along the rear, it's distinctly truck-like, with a low loading floor that makes it easy to lift up strollers and pets.

The interior is just as impressive, at least in the Limited model (starting at $50,085) that I tested for a week. A standard 9-inch touchscreen is the centerpiece of the infotainment system, and it comes equipped with support for Apple CarPlay, Android Auto and Amazon Alexa. The front-, second- and third-row seats are covered in a luxurious leather trim. That last row of seats can be laid flat with the tug of a string. And, well, there's just so much more room than my 2017 RAV4 Hybrid. I knew that going in, of course, but it's another thing to experience the vast size difference between a minivan and a crossover SUV in person.

Installing my toddler's car seat was much easier with the Sienna, thanks to its automatic sliding doors. There's more room to maneuver — a must when you're lifting a 30-pound device — and I appreciated actually being able to sit down in the other second-row chair to secure the seat belt. My daughter immediately took to the Sienna as well. As soon as I plopped her into the car seat, she looked around wide-eyed and said "Wow, I like this car!" (And this was after test-driving a Tesla Model Y, which elicited a mostly ho-hum response.)

It could just be that the 2021 Sienna is on many parents' wish lists right now, but I was surprised just how many people approached me to ask questions about it. Five minutes into my first drive, our local Dunkin' Donuts manager immediately recognized it and gave me his Indian Dad Seal of Approval. Several parents at local parks were impressed that it didn't look like a minivan at all (if you squint, it just looks like a slightly longer Highlander).

While I expected the Sienna to drive a bit like a boat, I was surprised to find it was pretty smooth and responsive. It's no sports car, but it handled Georgia's twisty back roads even better than my RAV4 (I'll chalk that up to the lower center of gravity). And despite losing the V6 engine from earlier models, the Hybrid Sienna still has plenty of kick to it. The 2.5-liter four-cylinder engine and dual electric motors offer an impressive 245hp combined, so it never felt underpowered as I passed slow trucks on the highway. We averaged around 33MPG throughout the week, even more than I typically see on our significantly smaller RAV4. The hybrid drivetrain also gives the Sienna an extra boost when moving from a full stop, making it ideal for stop-and-go traffic.

I didn't have any adventurous trips planned for testing out the Sienna's AWD, but I appreciated having extra traction while driving through torrential summer storms. That was particularly helpful when we were driving down steep mountain-side highways amid the rain. A front-wheel drive car probably would have been fine, but as an anxious dad, I'd always rather have the peace of mind.

And really, that's the main feeling I came with after testing the Sienna: a stress-free driving experience. I never had to worry about having enough cargo space for Home Depot runs, while also cramming in all of my daughter's baby gear. When my parents visited for a day, they easily hopped into the third row for a ride to the park, instead of trying to follow us and deal with parking. My wife loved having more room for large purchases, and she had a hard time going back to the smaller seats on our RAV4.

Driving the Sienna felt more like sitting in the cockpit of a family ship than a car, even one as well-equipped as my Limited 2017 RAV4 Hybrid. But I suppose that's true of any minivan. They're not just people movers; they're your family's second home. To that end, it felt nice to be surrounded by Toyota's Safety Sense 2.0 technology, which can help you avoid hitting pedestrians, alert and readjust your steering if you drift out of a lane, and use radar-assisted cruise control to automatically keep distance with cars ahead of you.

As much as I liked the 2021 Sienna, though, there's still room for improvement. Our review unit had an 11.6-inch screen for second and third-row passengers, but it required plugging in your own Blu-ray player or streaming device. Toyota supports Miracast for streaming from some Android phones, but I never got it to work correctly on a few recent Android devices. I suppose it's not too tough to plug in a Roku or Fire TV streaming stick, but then you'd have to rely on a hotspot or tether your phone for network access. The Sienna also offers its own built-in cellular hotspot, but that'll be yet another wireless subscription. I'd imagine most families would rather just give their kids a tablet with preloaded video.

Its CVT transmission also sounds, well, like a CVT. You’ll just have to get used to the painfully loud revving on the highway. If anything, it makes me hopeful that Toyota can sort out its electric plans sooner, so we can see what a silent (and more powerful) future Sienna would look like. At the very least, a future Sienna Prime would better compete with the Pacifica Hybrid plug-in.

As someone who used to be staunchly anti-minivan, I respect the 2021 Sienna for changing my mind. It’s far more useful than a big SUV, especially if you’re juggling kids. And it’s so comfortable, it may inspire you to take more family road trips. For many parents, that’s reason enough to get one.