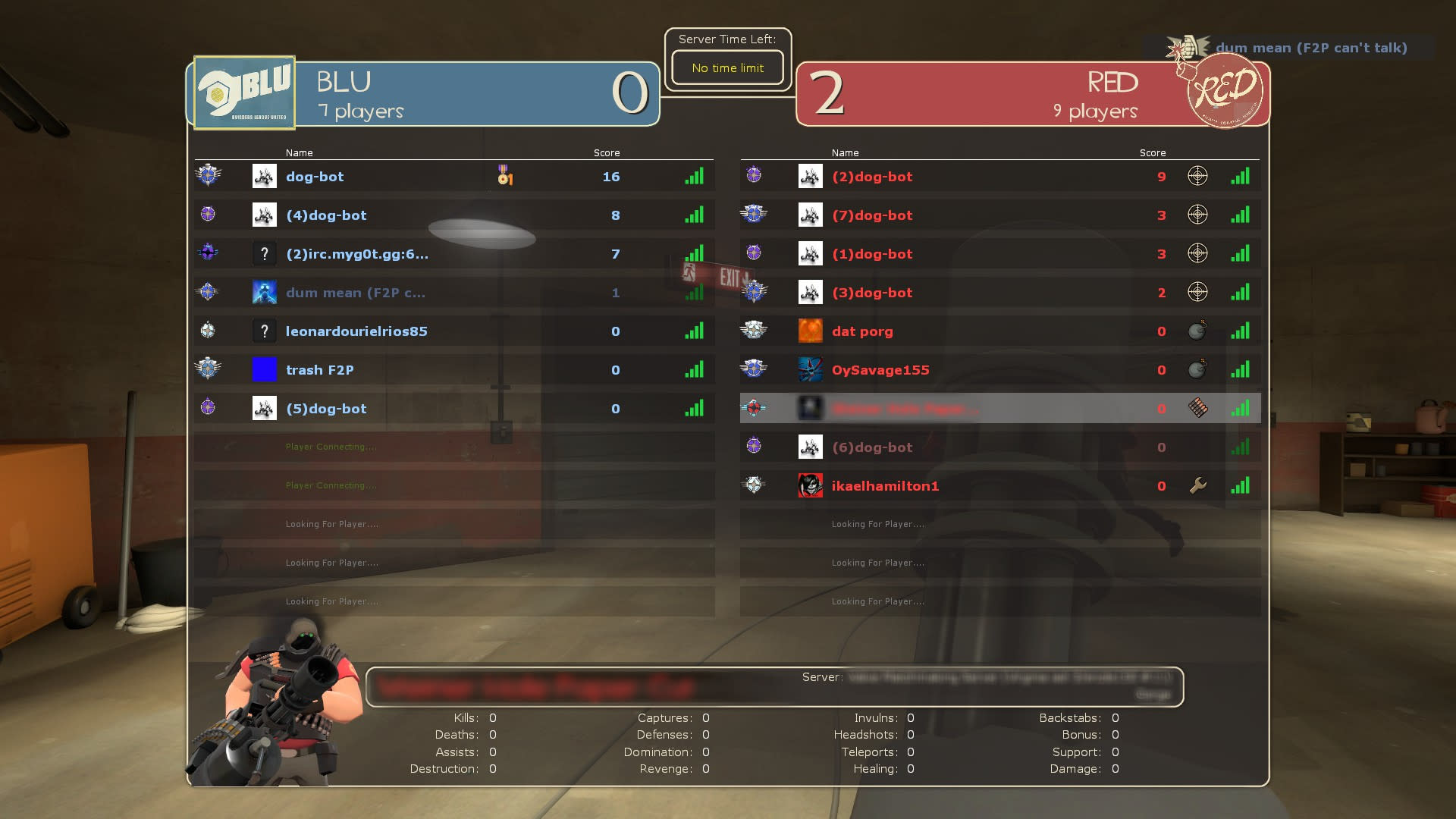 'Team Fortress 2' has been nearly unplayable for over nine months.

Nine months ago, Team Fortress 2 was overrun with racist, homophobic, sexist and transphobic bots. They were active in nearly every match, using cheats to secure headshots while spewing hate speech in the chat. Players documented the behavior and shared their frustration with Valve, the developer behind TF2, but the problem lingered for months. Once news of the bot invasion hit media outlets, Valve finally rolled out an update aimed at curbing their activity. The June 2020 update fixed a cosmetic bug that the bots had been exploiting and it removed the ability for free accounts to text chat.

It’s been nine months since that update. There’s still a big bot problem in TF2, and it looks like Valve is still ignoring it.

Longtime TF2 player Jason Hughes (name changed to keep him anonymous in-game) brought the bot situation to my attention in early June 2020. At the time, he called it “disastrous.” Nowadays, his description of the situation has changed. He said it’s “shitty.”

More specifically, Hughes said, “The bots are worse than ever. They may have taken away the bots’ ability to unequip your cosmetic items and it's now impossible for free accounts to spam the chat with racist stuff, but casual mode is pretty much unplayable now.”

Hughes was under the impression that the chat restrictions on free accounts would be temporary, but they’re still in place today. This removes a large portion of the bigoted speech, but it also means free-account players can’t communicate in-game. And even though most of the bots can’t chat anymore, they can still call vote kicks against actual players and flood matches with coordinated disruption campaigns. Plus, there’s still hate speech coming from a handful of bots with the ability to mimic the names and avatars of real players, and type in chat.

Hughes describes it as follows: “It can differ from week to week, but there are times when the majority of players on a server are bots. Even when that's not the case, it often takes a few minutes to clear them all out at the beginning of a game.”

Hughes isn’t the only TF2 player with a beef against the bots. The game’s Steam forums are littered with players complaining about the invasion, offering potential solutions, and wondering if Valve will do anything about it. The consensus seems to be “no.”

There’s a clear reason for this lack of faith in Valve. The studio has a long history of poor communication with players, and it tends to abandon incredibly popular properties without warning and seemingly without a plan. Team Fortress 2 hasn’t received consistent support for years now, and the Left 4 Dead and Portal franchises stalled out more than a decade ago. Despite the release of a VR-only Half-Life game in 2020, fans are still waiting for Episode 3, nearly 14 years after the launch of Episode 2.

In the meantime, Valve has been running Steam, the largest PC game distribution hub in existence, and focusing on the non-software aspects of its business, such as VR devices, esports tournaments and anime series. Unfortunately, the company has trouble with transparency in these arenas, too. Professional Counter-Strike: Global Offensive players are leaving the esports scene in droves amid widespread league mismanagement, and longstanding communication and gameplay issues. The Dota 2 esports scene is currently a mess amid a multi-team coronavirus outbreak during the season’s first Major tournament in Singapore. On the Dota 2 Reddit forum, fans are placing the blame on Valve’s historical lack of responsibility.

As for Steam, Valve has refused to engage with developers who say the company’s revenue-sharing model is exploitative and out of date with modern standards. Valve takes 30 percent of each sale made on Steam, while its main competitor, the Epic Games Store, charges developers 12 percent.

So, it’s no surprise that TF2 players don’t have a lot of faith in Valve. They’ve tried to implement their own solutions to combat the bots, but these tend to require player input and self-moderation, and they can’t actually stop the fake accounts from flooding in. Nowadays, booting up TF2 means dealing with bots.

Hughes and other players just want maintenance in TF2. He has a few suggestions for Valve, including instituting a trust system like in CS:GO, making it impossible to create free accounts en masse, updating the game’s anti-cheat system, and communicating with players. Basic stuff.

Even if the company does have a massive TF2 update planned in the near future, that won’t change the fact that it’s left its most loyal players flapping in the breeze for years. And why? It’s not good customer service, it’s not good for the game itself, it’s not good for Valve’s reputation, and it’s not good for Valve’s bottom line — but it’s also not going to bring the company to its knees. Thanks to the revenue machine that is Steam, Valve remains a private, multibillion-dollar company, headed by reclusive billionaire Gabe Newell, and beholden to no one. In the same way that Google looms so large in the tech industry that it can create and destroy world-changing products on a whim, Valve is similarly comfortable in its position as a video game powerhouse. In the end, leaving TF2 to die won’t kill Valve.

Maybe Valve will resurrect TF2 one day. Maybe Newell will reveal there’s actually been a team of 50 developers working on a massive overhaul of the game for the past seven years. Maybe there are already plans for a TF2 esports league. Yeah, maybe. This kind of optimistic daydreaming is Valve’s lifeblood. Maybe Valve will make L4D3, or Episode 3, or Portal 3; maybe Valve will start communicating with the CS:GO and Dota 2 communities; maybe Valve will consider the deluge of developer feedback and institute a more equitable revenue-sharing model. Maybe. Valve’s reputation is built on this word.

As the arbiter of a handful of legendary, genre-defining series, Valve has the power to tease out feelings of excitement and anticipation without even trying. And, in many areas, that’s what Valve’s been doing — not even trying. Just ask the TF2 community.