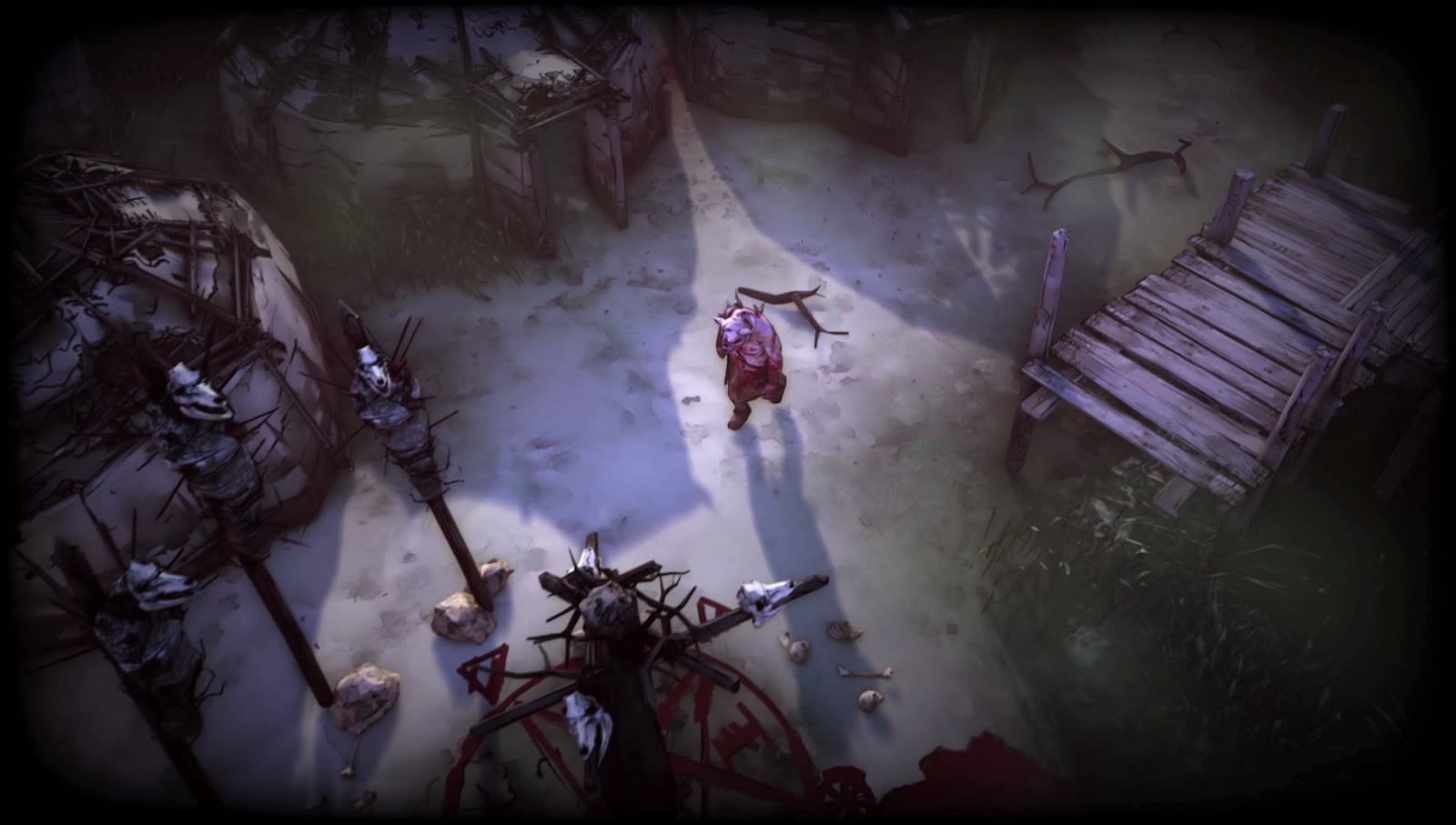 Respawns won't save you in 'Weird West'

Witches, werewolves and deep RPG mechanics from the devs behind 'Dishonored.'

Weird West isn’t a horror game, but it has at least one narrative arc involving cannibalism. In some scenes, citizens in quaint Old West towns lay dead in the streets for mysterious reasons. In others, red-soaked pentagrams are etched into the dirt, surrounded by animal bones. A large man wearing a pig’s head as his own walks slowly through the dust, shirtless and splattered with blood. Miles away, in a flooded cavern, a 20-foot-tall monster with sleek black skin, no eyes and a grinning maw of shark teeth lurches forward for the kill.

“There are some pretty horrific little stories,” creative director Raphael Colantonio said. “I mean even the main story, frankly, there’s some stuff about cannibalism that turns into actually -- yeah, I mean I don't want to reveal everything. Too much detail.”

Since announcing Weird West in December, Colantonio has described it as an immersive sim, a hardcore subset of the RPG genre that features a completely responsive world, branching narratives based on player choice, and permanent actions. Weird West presents the Wild West from a top-down 3D perspective, and then fills it with hand-drawn watercolor-style buildings, people and animations. And, sometimes, werewolves.

This is Colantonio’s signature move as a game developer -- taking a classic setting and infusing it with magic. He founded Arkane Studios in 1999, and he was the creative force behind massive contemporary hits including Dishonored and Prey. It’s been three years since Colantonio left Arkane, a studio he helped grow from a small, independent outfit in Lyon, France, into a AAA production machine with offices in Austin, Texas, and contracts with Valve, Bethesda and 2K. ZeniMax Media (Bethesda’s parent company) acquired Arkane in 2010, and Colantonio resigned in 2017 to spend time with his son and reevaluate his professional goals.

He launched WolfEye Studios alongside Arkane veteran Julien Roby in 2019, and they got started with just under 20 employees scattered around the world, working remotely. Weird West is their first game.

He means that literally. Not only is Weird West strange and based on cowboy lore, but it adheres perfectly to the literary subgenre also called “weird west.” These stories merge the Old West with science fiction, fantasy, horror or occult themes -- think 1999’s Wild Wild West or Stephen King’s Dark Tower series.

“Like in any game that I've worked on, I always like that there is some aspect of it that is special,” Colantonio said. “Right? It's different, it's weird, it's fantasy. And so that's why I'm marrying things that are more occult and demonic, or witchcraft, things like that. Blending this into a world that's familiar makes sense.”

In Weird West, players take on the role of five heroes, individually, as they attempt to unravel the region’s biggest mystery (which is itself a mystery, for now). Remember the pig-headed man covered in blood from the intro? He’s one of the heroes. According to the game’s most recent trailer, there’s also an occultist, werewolf, indigenous man and a female gunslinger.

Their destinies are intertwined, but each character walks his or her own path, and they’re all equally susceptible to the game’s harshest mechanic: linear progression. As an immersive sim, Weird West doesn’t allow players to travel backward in time or undo any action, even if it resulted in the death of a compatriot, the ire of an entire village or a failed mission. Players can die in the game, but anything that happened before death will remain true at respawn. Time marches on.

This makes the game world feel particularly responsive and alive, allowing WolfEye to implement progress-sensitive mechanics like bounties that follow players throughout their adventures and timed missions. It also lends extra weight to every decision made in Weird West, and it levies a heavy tax on mistakes or misclicks.

“I'm super worried,” Colantonio said. “I mean, I think it's healthy to be worried. You don't want it to be paralyzing, but whenever we do something that is a bit of a bold move, something that hasn't been done exactly that way before, or has failed in some other games, then yeah, of course it's a worry. We believe in it, though.”

Colantonio said his development style involves throwing every idea at a game, and seeing what sticks. It’s more erratic than starting with 10 concrete features and building a game around those, but this is how he did things at Arkane, and the system has followed him -- and Roby -- to WolfEye.

“The way we develop a game is always, since my first game that I ever did, was to put a lot of ingredients in the stew,” Colantonio said. “And sometimes you don't even know if they're really going to be useful and let them live and give them a chance. And then the ones that actually are important to your stew will emerge.”

You know, ingredients like an ultra-punishing progression system or an abundance of animal sacrifice.

Weird West is due to hit Steam in 2021, published by Devolver Digital. Colantonio’s band, Weird Wolves, provides some of the music in the game and its early trailers. Weird West is infused with bits of Colantonio and other WolfEye developers; they’re passionate about its mechanics and they believe in its story. There’s no other way to make a video game, Colantonio said.

“I'm 49 and I like to do what I like to do,” he said. “I'm not here to listen to the markets specifically to try to make the thing that is going to be the thing that’s going to make you rich, or something. Making games is hard, and I just want to enjoy the road. I want to make games that I'm proud of, that somehow contribute to the evolution of the gaming industry.”

Weird West promises a rich, living world filled with danger and demonic activity, and at least one mystery to solve. It employs progression in new ways and supports a variety of approaches, letting players sneak through levels or show up with guns blazing. It’s an action RPG and an immersive sim; it’s beautiful and terrifying. But Weird West is not a horror game.

Well. It’s not only a horror game.

All products recommended by Engadget are selected by our editorial team, independent of our parent company. Some of our stories include affiliate links. If you buy something through one of these links, we may earn an affiliate commission. All prices are correct at the time of publishing.
View All Comments
Respawns won't save you in 'Weird West'