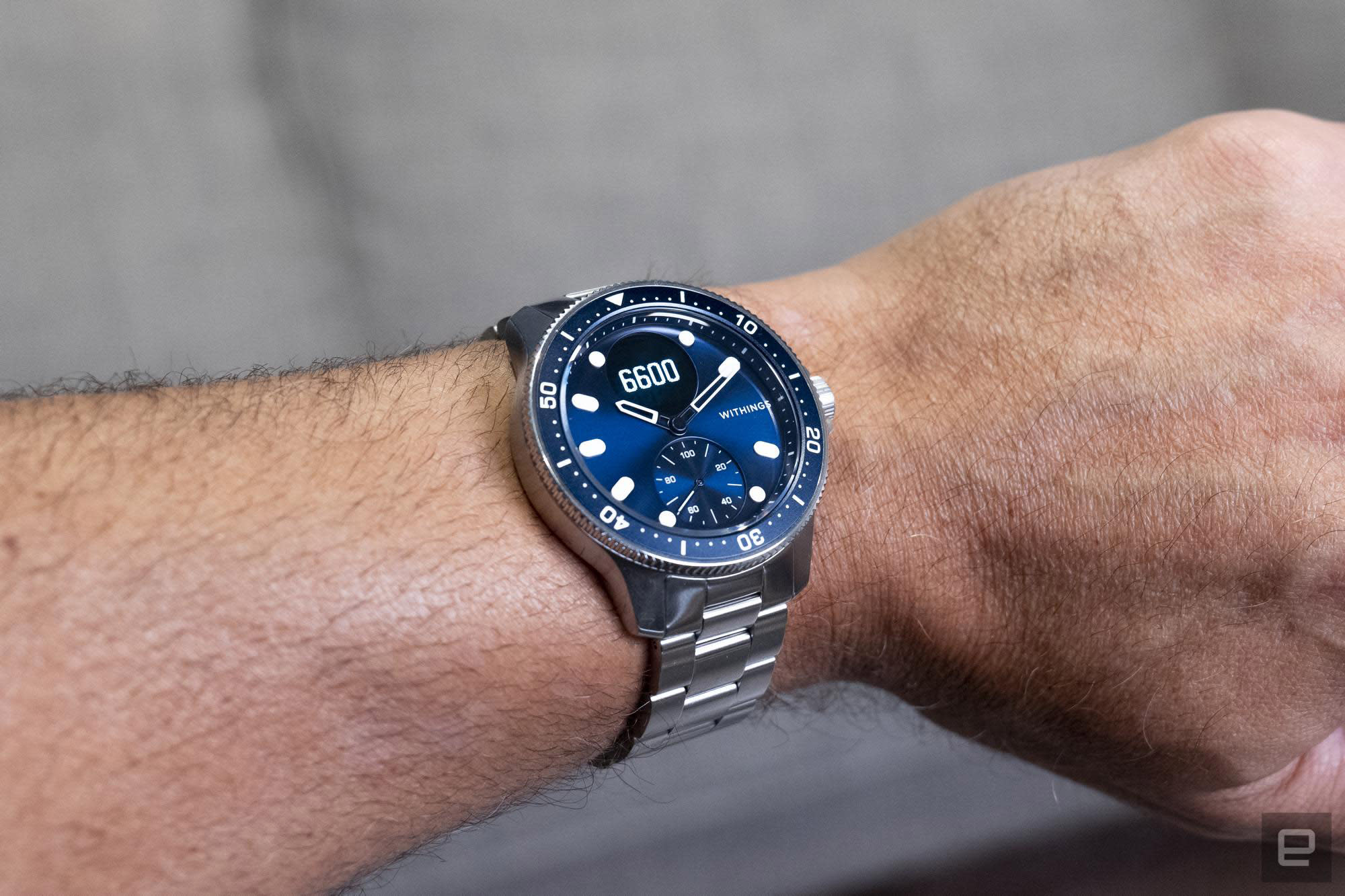 The ScanWatch Horizon is a classy, ECG-packing hybrid.

Withings is today launching the ScanWatch Horizon, a dolled-up version of its ScanWatch inside the body of a diving watch. Horizon comes in a bigger, 43mm case size, but is otherwise the same device we already think is the best hybrid on the market. That includes the built-in ECG, blood oxygen sensor and sleep apnea tracking, as well as the usual activity and sleep-monitoring features. You’ll also get the same pair of sub dials, one with a small digital screen for notifications, the other an analog activity counter.

At an event in Paris, we got a chance to see the ScanWatch Horizon and try it on, though it was a non-functional prototype. It's certainly as pretty in person as the photos show, and with the steel quick-release band, feels nice considering the price. For the first time, Withings will sell the ScanWatch Horizon at jewelers on top of other retail locations.

The company told Engadget that the chunkier Horizon model has a more "masculine" design for larger wrists, with only a 43mm model available. The original ScanWatch, by contrast, came in sizes ranging from 38mm to 42mm.

Sadly, the beefier body and higher price hasn’t added anything to the feature list, and so there’s no GPS on this watch unless your phone comes along for the ride. And, if we’re nit-picking, we can say that while it’s dressed to impress as a diving watch (with an accurate laser-engraved rotating bezel and Luminova watch hands) water resistance is limited to 10ATM. That allows for snorkeling, water activities and some scuba diving, but it isn't much compared to most serious diving watches.

That said, the smartwatch world is crying out for anything that matches premium diving watch styling with a hint of smarts. It can’t be that TAG Heuer’s Connected is allowed to become the default in this market by default, especially since it’s running, you know, Wear OS.

Withings told Engadget that FDA approval of its ECG health sensor is holding back the ScanWatch Horizon's release in the US, but it's hoping to bring it stateside by the end of the year. That's also why the original ScanWatch has yet to go on sale in the US, in case you were wondering.

As for when you can get one of these on your wrist, the ScanWatch Horizon will first launch in the UK from September 29th, priced at £499.95 / €499.95. Buyers will be able to choose the Blue or Green face color, and both models will ship with a quick-release stainless steel and an FKM rubber band (for swimming). It also arrives today in France and Germany, and you can expect it to pop up a bit later elsewhere in Europe.