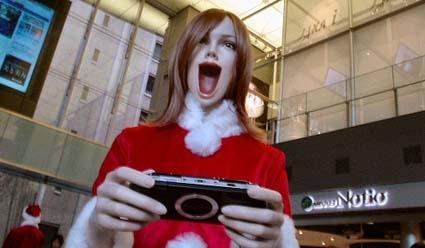 Just in time for next week's infamous Black Thursday, IGN has released its 2006 Holiday Buyer's Guide and has also added their 10 choices for PSP games that should fill your stockings this Christmas. That's if you've been a good boy or girl, because if you've been bad, you get Family Guy.

What, no Sega Genesis Collection or EA Replay? And while Daxter is a very good game, I don't think too many kids will go Nintendo 64 Kid crazy over getting a game released in March. Still, this is a pretty decent list, and I can't argue with it too much. If you're PSP shopping for someone, you might want to refer to this list.
In this article: ace combat, AceCombat, buyer\'s guide, Buyer\'sGuide, christmas shopping, ChristmasShopping, daxter, ea replay, EaReplay, family guy, FamilyGuy, grand theft auto, GrandTheftAuto, holiday, locoroco, medal of honor, MedalOfHonor, metal gear solid, MetalGearSolid, Music, nintendo 64 kid, Nintendo64Kid, sega genesis collection, SegaGenesisCollection, Sony, Sony-Computer-Entertainment, syphon filter, SyphonFilter, tekken, vice city stories, ViceCityStories
All products recommended by Engadget are selected by our editorial team, independent of our parent company. Some of our stories include affiliate links. If you buy something through one of these links, we may earn an affiliate commission.
Share
Tweet
Share