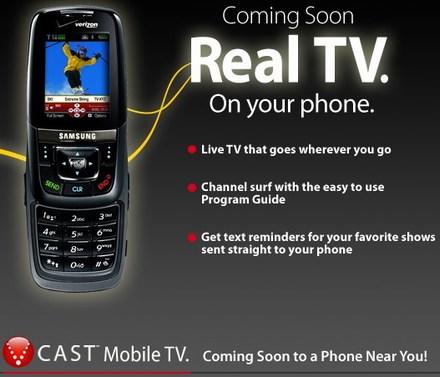 Nah, Verizon Wireless isn't snapping up Alltel just yet or anything, but the carrier is formally announcing its plans to launch its much-anticipated V CAST Mobile TV service right on schedule. The March 1st date that's been floating around is purportedly true, meaning there won't be any unforeseen delays in enjoying the mobile TV abilities of your forthcoming SCH-U620 or VX9400 -- if you're in a launch market, that is. Currently, the exact whereabouts of launch capabilities is a bit ambiguous, and curiously omitted are major markets such as "New York, Los Angeles, Chicago, San Diego and Las Vegas," but the provider reportedly plans to have a good deal of these "major markets" covered by the "end of Q1," or March 31st. The service will utilize Qualcomm's MediaFLO mobile TV network, which AT&T also plans on eventually using, and will offer up programming from CBS, Comedy Central, Fox, MTV, NBC News, NBC Entertainment, and Nickelodeon. Unfortunately, we're still in the dark in regard to an official pricing structure, but with only T-minus two days 'til kickoff, the remaining minutiae should surface soon enough.

In this article: breaking news, BreakingNews, cbs, comedy central, ComedyCentral, Fox, launch, lg, mediaflo, mobile tv, MobileTv, MTV, NBC, Nickelodeon, portable video, portablevideo, Qualcomm, samsung, SCH-u620, tv, vcast, vcast mobile, VcastMobile, verizon, VX9400
All products recommended by Engadget are selected by our editorial team, independent of our parent company. Some of our stories include affiliate links. If you buy something through one of these links, we may earn an affiliate commission.
Share
Tweet
Share