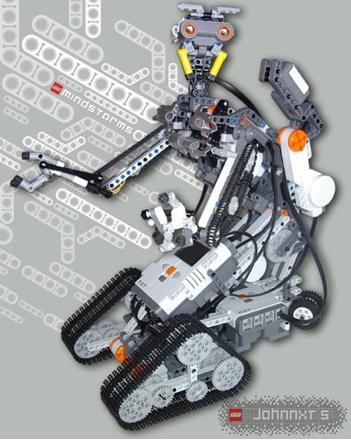 While we're no strangers to the crazy robots people build out of LEGOs, Daniele Benedettelli's LEGO Johnny Five has got to be the most awe-inspiring brickwork we've seen in a while. The NXT-based 'bot actually contains two NXT units that communicate via Bluetooth to provide Mr. Five a full range of motion from his 6 motors and as much input as he can handle from up to 8 sensors. Benedettelli built the model after careful study of Johnny Five photos to determine his precise measurements, and two previous attempts. While we applaud all this effort, we can't imagine how much time it's going to take him to plate version 4 in gold. Check the read link for plans and videos of Johnny in action.

[Via MAKE: blog]
In this article: Daniele Benedettelli, DanieleBenedettelli, johnny five, JohnnyFive, lego, mindstorms, mindstorms nxt, MindstormsNxt, model, nxt
All products recommended by Engadget are selected by our editorial team, independent of our parent company. Some of our stories include affiliate links. If you buy something through one of these links, we may earn an affiliate commission.
Share
Tweet
Share