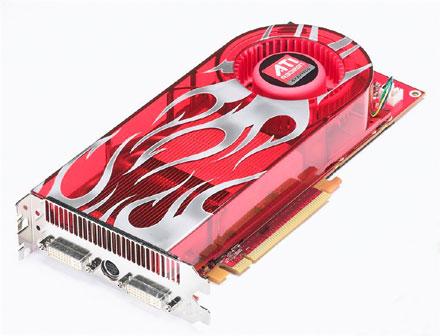 We've already seen it benchmarked, but those of you considering ATI's new top-end Radeon HD 2900 XT graphics card now have a number of full-on reviews to sink your teeth into, all of which seem to be roughly in line with each other. On the all important point of performance, ExtremeTech, HotHardware, and [H] Enthusiast each found that the card held its own against NVIDIA's GeForce 8800 GTS in the usual array of tests, although it fell well short of NVIDIA's pricier GeForce 8800 GTX, which ATI still has no answer to. All three also found many of the same things to complain about, most notably the card's noise and excessive power consumption, although ATI is promising a driver update to cut down on some of the racket. HotHardware also points out that the ATI card likely has more room to grow through driver updates than the NVIDIA, and speculates that a 65nm version of the card could arrive "sooner rather than later." Until then, however, all three look to be sticking with NVIDIA hardware, with the 8800 GTS offering a better value for the money, and the 8800GTX providing the necessary all-out performance to those who demand such things.

[Thanks, Mathieu]
In this article: ati, ATI Radeon HD 2900 XT, AtiRadeonHd2900Xt, graphics card, GraphicsCard, radeon
All products recommended by Engadget are selected by our editorial team, independent of our parent company. Some of our stories include affiliate links. If you buy something through one of these links, we may earn an affiliate commission.
Share
Tweet
Share