Is FlipStart closing up shop? 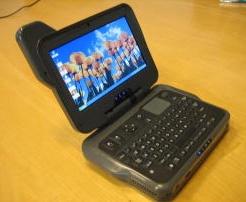 General Dynamics (who purchased Itronix a couple years back) thinks it's tough stuff, and now it's after that hip new UMPC market with those rough and tumble wares. The new GoBook MR-1 is essentially a FlipStart plus rugged, sporting rubber and brushed aluminum protection, port covers and a housing hump for the WWAN antenna. Don't go dunking this one in the drink, it's only semi-rugged, and we're guessing the $4,450 price tag might dissuade you as well from testing this one's robustness. Since it's just a repackaged FlipStart, there aren't many surprises on specs, though GD did pack in a Intel Core Solo processor instead of the FlipStart's weaker Pentium M offering, and put in a 40GB drive instead of the existing 30 gigger. All the rest is all FlipStart, including all the ugly and the two pound weight of the original. General Dynamics expects to start shipping this in September.

Update: General Dynamics clarified some of the initial info we had about this thing. Turns out the unit is is indeed "rugged," (not just semi-rugged) up to military specs 810F and IP54 and GD will include a Dynavue touchscreen option by year end. The MR-1 is built by the same people who put together the FlipStart, but from the "ground up," with different specs (like that Core Solo proc), a bundle of wireless options, an 80GB hard drive option and even an SSD alternative.

In this article: flipstart, general dynamics, GeneralDynamics, gobook, gobook mr-1, GobookMr-1, itronix, rugged
All products recommended by Engadget are selected by our editorial team, independent of our parent company. Some of our stories include affiliate links. If you buy something through one of these links, we may earn an affiliate commission.
Share
Tweet
Share