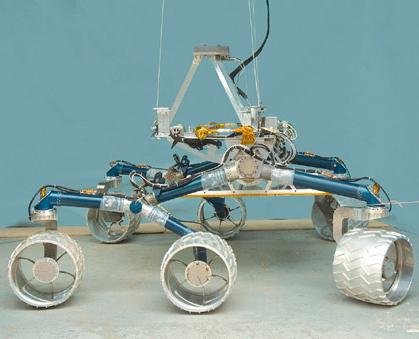 Just months after learning the truth behind the fall of the late Mars Global Surveyor, NASA is already test driving the next great planetary invader. The vehicle, dubbed Scarecrow for its (current) lack of brain matter, is already conquering terrain in the Mars Yard as it prepares for a scheduled launch in 2009. Its sole mission in life will be to "follow the evidence of water that has already been found on the surface of Mars," and just in case any unforeseen hostiles attempt to sabotage its assignment, the engineers have equipped it with a "laser that can pulverize rock from 20 feet away." So much for a peaceful visit.

[Via The Raw Feed, image courtesy of NASA/JPL-Caltech]
In this article: ATLO, mars, nasa, rover, Scarecrow
All products recommended by Engadget are selected by our editorial team, independent of our parent company. Some of our stories include affiliate links. If you buy something through one of these links, we may earn an affiliate commission.
Share
Tweet
Share