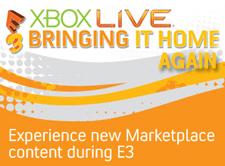 Microsoft is reemploying their Bringing it Home campaign for this year's Min-E3. The campaign has previously been seen during last year's E3 and their X06 event in Barcelona, Spain.

As part of Bringing it Home, a barrage of content will be made available via Xbox Live, including their July 10 press conference, game trailers, themes, gamer pictures, demos and other video updates. Some of the games mentioned include Assassin's Creed, Bioshock, Blue Dragon and Project Gotham Racing 4. A partial list (expect surprises from the show) is available after the break.

In this article: bringing it home, BringingItHome, e3, e3 2007, E32007, major nelson, MajorNelson, marketplace, xblm, xbox live, xbox live marketplace, Xbox-360, XboxLive, XboxLiveMarketplace
All products recommended by Engadget are selected by our editorial team, independent of our parent company. Some of our stories include affiliate links. If you buy something through one of these links, we may earn an affiliate commission.
Share
Tweet
Share