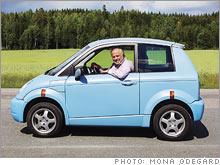 Wee electric cars such as the one pictured to the right aren't exactly uncommon, but if Think CEO Jan-Olaf Willums can get his dreams to pan out, his version of the urban green car may actually gain some serious traction. Reportedly, the firm has garnered upwards of $78 million from Silicon Valley and European investors who see promise in the carbon-neutral whip, and moreover, in changing the way we all buy and interact with our cars. Ideally, Think will only sell its vehicles online, which would reduce overhead dramatically, and will equip the cars with WiFi in order to become "a rolling computer that can communicate wirelessly with its driver, other Think owners, and the power grid." Notably, Think plans to "to sell the car but lease the battery as a way to overcome one of the biggest conundrums of electric automobiles," and while nothing is set in stone, the "City" could arrive in select locales as early as 2009.

In this article: alternative energy, AlternativeEnergy, electric car, ElectricCar, europe, green, li-ion, norway, think
All products recommended by Engadget are selected by our editorial team, independent of our parent company. Some of our stories include affiliate links. If you buy something through one of these links, we may earn an affiliate commission.
Share
Tweet
Share