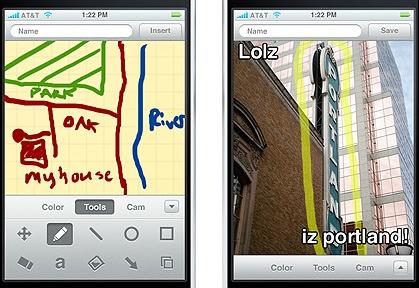 Everyone and their mother has requests for iPhone apps - heck, I had eight of them. But not everyone goes the extra mile like Phillip Ryu has to create detailed screenshots of how their apps should look (Update: Phill contacted me to clear up that Josh Pyles created the screenshots in collaboration). In addition to the screenshots, most of Phill's requests in 5 iPhone Apps I'd Like To See From Apple are also unique from similar posts I've seen across the blogosphere - he's asking for things like an Archive.org/Ebook reader, the iTunes Store for iPhone (of course, but a nice mockup nonetheless), a sketching app (Skitch for iPhone anyone?), a VoIP app and iMovie for iPhone that could offer basic editing and sharing with .Mac, YouTube and Mail. It's an interesting list of requests with pretty pictures that do a great job of mocking up the apps with the iPhone's new UI paradigms in full force. No tiny menus or tool palettes here; just large buttons, lists with large text and toolbars lining the bottom of each app. Here's hoping that the signs pointing towards true iPhone app development arriving with Leopard in October are more than empty speculation.
In this article: apps, iPhone, mockups, requests, screenshots
All products recommended by Engadget are selected by our editorial team, independent of our parent company. Some of our stories include affiliate links. If you buy something through one of these links, we may earn an affiliate commission.
Share
Tweet
Share