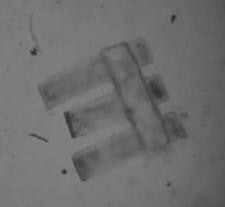 While we've seen a microbot that crawls across hearts, a new creature has been developed by gurus at Chonnam National University in South Korea that actually gets its energy from the heart. Reportedly, the team created the robot by "growing heart muscle tissue from a rat onto tiny robotic skeletons made from polydimethylsiloxane (PDMS)," and the result is an E-shaped creature that can move its own legs through the "relaxing and contracting of heart muscle cells." Currently, the bot has been clocked scurrying along at a stagering 100 micrometers-per-second, and while it isn't apt to win any races, it could be loosed within the body to "clear blocked tubes or arteries" in the future. Check the video of this wild guy in action right here.

In this article: health, heart, medical, medical robot, MedicalRobot, microbot, microbots, University
All products recommended by Engadget are selected by our editorial team, independent of our parent company. Some of our stories include affiliate links. If you buy something through one of these links, we may earn an affiliate commission.
Share
Tweet
Share