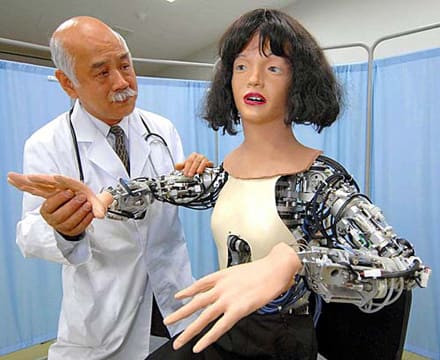 As if treating a mannequin that can bleed and even flat line on you wasn't stressful enough, researchers at Gifu University's Graduate School of Medicine are hoping to make your residency even harder to manage. A newfangled robotic dummy packs a potent artificial brain, as it can reportedly "respond verbally to questions about how it feels and move its body in ways that exhibit the symptoms of its ailment." The current prototype is modeled after a female who honestly looks to have had one incredibly rough day week, and while it wasn't clear if instructors could program the android to act out only a certain number of understood illnesses, we're sure the library of problems will grow with time. Currently, the bot is being trailed to see if it will indeed prove to be a valuable learning tool to eager med students, and if all goes well, it should "become part of the curriculum next year."

[Via PinkTentacle]
In this article: android, aural, doctor, dummy, gifu, health, humanoid, ill, japan, mannequin, mannequins, med school, medical, medical school, MedicalSchool, MedSchool, patient, sick, training, university
All products recommended by Engadget are selected by our editorial team, independent of our parent company. Some of our stories include affiliate links. If you buy something through one of these links, we may earn an affiliate commission.
Share
Tweet
Share
Save