'Alexa, Improvise' is a comedy show that uses AI fails for laughs

Bot Party asks: Are robots the future of comedy?

Join Joystiq at GaymerX2 this weekend 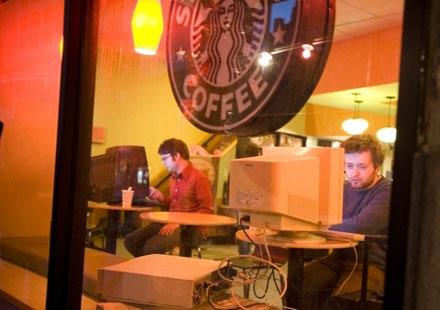 We've already seen the confusion and hilarity some so-called "portable" computers can cause when taken out into public, but those shenanigans are nothing compared to the scene stirred up when the folks from Improv Everywhere lugged some ancient desktop computers (replete with CRT monitors) into a Starbucks. As you can see in the video after the break, they surprisingly weren't kicked out, but they did manage to attract a fair bit of attention, including from a few folks that thought the computers were set up for public use. Be sure to head up the read link below for the full report, as well as another video with the team relishing in their accomplishment.

[Thanks to everyone who sent this in]
In this article: improv, improve everywhere, ImproveEverywhere, prank, starbucks
All products recommended by Engadget are selected by our editorial team, independent of our parent company. Some of our stories include affiliate links. If you buy something through one of these links, we may earn an affiliate commission.
Share
Tweet
Share