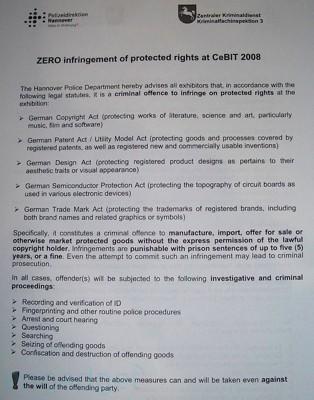 Apparently Meizu wasn't the only manufacturer to get a friendly visit from German police at this week's CeBIT tradeshow in Hanover. The word is that 51 different exhibitors got busted at the show for the patent infringement, with 180 law enforcement officers confiscating 68 moving boxes worth of gear. Primary offenses included Meizu-style MP3 / MP4 infringement, along with unregistered CD, DVD-R and DVD playback devices. All companies were informed of the rules before the tradeshow, and the warning we spotted at Meizu's booth (pictured above) should've probably served as a pretty good hint to these companies as well. China boasted the most offenders at 24, then it was Taiwan with 12, Germany with 9, and Poland, Netherlands and Korea with one a piece. Everybody else just isn't trying hard enough.

[Thanks, Mademoiselle Y]
In this article: cebit, cebit 2008, Cebit2008, meizu, patent infringement, PatentInfringement, police
All products recommended by Engadget are selected by our editorial team, independent of our parent company. Some of our stories include affiliate links. If you buy something through one of these links, we may earn an affiliate commission.
Share
Tweet
Share