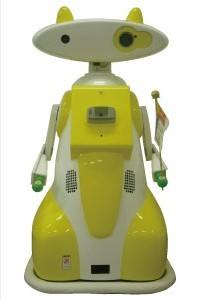 Inhuman babysitters aren't all that uncommon around the world, but a new creature recently placed in a Japanese department store is a godsend for shopaholics with rugrats in tow. Developed by Tmsuk, the 1.4-meter tall bot is employed at a Fukuoka retailer in order to keep watch over rambunctious youngsters that are dropped off by their overworked parents. Reportedly, said critter boasts an integrated projector and camera, a colorful yellow / white outfit and the ability to identify children by name based on a special tag that each kiddo wears while playing. Of course, the manufacturer isn't looking to just shove one or two of these into every store in Japan -- oh no, it's hoping to create similar robots that could one day "guide customers through the aisles of a store," fill their carts or whisper the joke of the day in a French accent into their ears.
In this article: Aeon, baby sitter, BabySitter, childcare, japan, Tmsuk
All products recommended by Engadget are selected by our editorial team, independent of our parent company. Some of our stories include affiliate links. If you buy something through one of these links, we may earn an affiliate commission.
Share
Tweet
Share